Mutant Caterpillars and other tales from the Garden.....Part 1

Well I figured I'd better split this post into two parts, otherwise its going to look like a novel and I don't want you getting bored half way through, now do we?

So I suppose I should explain the mutant caterpillar remark. Dh was out on Monday and he called in at the garden centre at the local grocery store and they were clearing out the stock with 75% off. So dh picked up a Beech tree that we had been wanting. Brought it home and told me about the sale, so I told dh and ds to take the tree into the back yard, while I popped down to see if there were anymore plants that I could use.

Got back and both dh and ds were in a tizzy about the tree and it had these 6 foot caterpillars on it with big red dots on their backs.......and ds said one touched him. After I finished rolling my eyes and saying whatever I remembered many moons ago when ds was young, him playing with a bunch of his friends with caterpillars all day and at night all the boys came down with hives. Caterpillars will secrete some liquid that will make you come out in hives. For the British and Australian people reading this post, I can't for the life of me remember what the British word for a hive is, big red blotches are what they are. So since that day ds hasn't been too keen on caterpillars.

Dh is refusing to touch the tree until I have removed all the caterpillars. Now despite the fact they are 6 feet long according to dh, I have yet to see one. Regardless I have told dh I got rid of them all........however between me and you I haven't looked at the tree. What he doesn't know won't hurt him. Now Alan, if you are reading this, you tell dh and you won't half suffer, so don't say I didn't warn you!!!!

Now I have to say this tree doesn't look well: 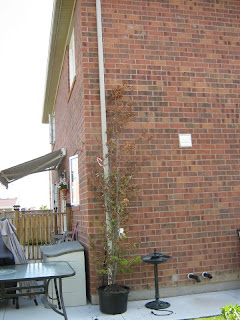 It has very few green leaves on it, the rest are brown and crispy. As I said to dh its probably stressed, so it should fit in really well around here. It needs to be planted, watered and loved. So fingers crossed when dh gets around to digging the hole and planting it, now that it has been de-caterpillared (is there such a word?) it might thrive. By the way, if you see a 6 foot mutant caterpillar with big red dots on its back wandering down your street, say hello for me but don't send it back!!

Last week I was talking about the reject trees on our little part of the crescent. Well its not enough that my tree is depressed, the grass is downright suicidal at the moment. That poor grass has been through so much. I do look after it, but its a no win situation. We have had a grub invasion, managed to get over that. We came back of holidays a couple of years ago to find an infestation of crane flies, we call them daddy long-legs in Britain, didn't realise you could have swarms of them? The voles are forever digging highways all through our grass, and now its nacrotic ring. Now its not neurotic, that's the owners, its nacrotic. Its actually bad to see on the photo I took, but believe me they are bad and all over our lawn. 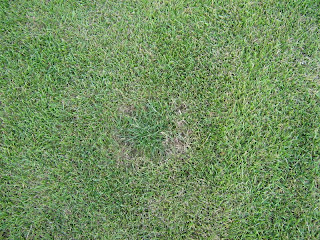 The one and really the best way of getting rid of them, is to dig the whole ring out, six inches down and six inches away from the edge of the ring and dispose of the grass and soil. Well now we are in a built up area, we have to dump the soil at the garbage dump and pay for the disposal, or we find a building site and hope no one catches you dumping it. Oh wait, that means we are going down the path of the rock story and with our luck we will get caught by the police and fined this time.

So we did get the lawn company to overseed with rye grass as that is supposed to be tough enough to grow where necrotic rings are, but basically we wasted $250 there as they are as bad. While I am whining about the lawn company, I just paid another $110 bill for them for putting grub control down. I don't think I posted about that on my blog. We have a large lot, larger than the average sized subdivison lot. The young kid was in and out of our yard, in less than two minutes. I thought he had gone to refill his hopper, but no he had gone, and they charged me $110 for the pleasure. So once again I sigh and get on the phone and make them come back and do it properly. Tried to tell he did it right in the first place, going around the perimeter and once across the middle doesn't cover the whole of our lawn. He did it right the second time.

So the best I can do at the moment is water the lawn frequently and mow it twice a week.

One of the jobs that needed done this week was to waterproof/stain the deck. It only takes a morning and it helps preserve the deck. 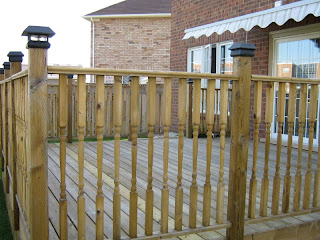 I have to say Dh did a great job on the deck. We are going to buy a Gazebo next to give us more shade, as we get full sun at the back of the house in the afternoon and evening. 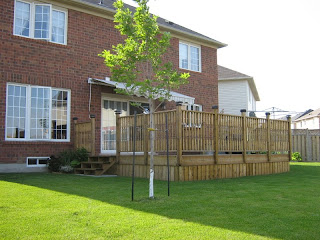 That's enough garden stories for one day, tune in tomorrow for part 2 :0)

(I have to say looking at that photo the grass looks lovely, but believe me close up it is a mess)
at July 03, 2008

Email ThisBlogThis!Share to TwitterShare to FacebookShare to Pinterest
Labels: gardening

I just wanted to say thank you for visiting my blog! Delighted you dropped by, and am glad that you like what you saw! (I'm also "A British Woman" by the way!)

Lisa thanks for popping by I'll be calling in to say hello later on your blog!!!

Thank you again, Gill! I am thrilled to receive such nice comments.

Am having fun looking around your blog finding out how you save money.

Hi Cathy, thank you for popping by,

I envy your lawn since ours is about 1/4 non-exsistant and 1/2 weeds. Our yard is full shade which is nice to not worry about the kids burning to a crisp playing outside. But not so great for growing much of anything, especially grass.

We have a 1000 square foot back yard (bigger then our last apartment!) and not a spot of grass to be found. I might try that grass that you mentioned as with 2 dogs and 2 kids running around the grass never had a chance.

Jamie, rye grass seed is supposed to be hardier than regular grass seed. Though to my mind I would buy sod, it would be a lot easier for you.

Hi Gill, I think your lawn looks pretty good, I would be annoyed though if it was less than perfect after spending all that money. Gardens are lovely but there is always a problem somewhere. Can't say I've had a giant caterpillar but I have the odd cow break in which can be just as destructive. Thanks for visiting our blog. Julie.