I know I should have done this prior to our 25th Wedding Anniversary, but I forgot I had taken the photo's of the church where we were married when we were in England in February. So here they are.

This is St. Lawrence Church in Appleby. 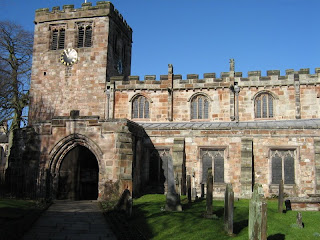 The information I am about to tell you is mainly from this link. Have to say the photo's are a whole lot better than mine as well!!!

The earliest part of the church was built in the 12th century, pretty old eh!!! It also has the oldest English working organ, which of course I didn't take a photo of, and dates back to 1683.

Here is the baptismal font, where both of our kids where baptised, and if I remember rightly "T" wasn't a happy camper about having water splashed on his head, while "C" was fine about it. Mind you "T" was six months old, whereas "C" was six weeks old. We moved house when "T" was little so the Christening was put on the back burner. 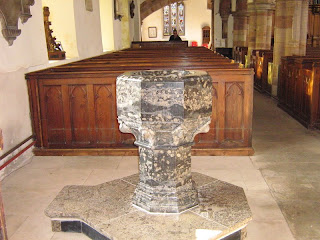 I was also confirmed in this church, as well as being married in the church. 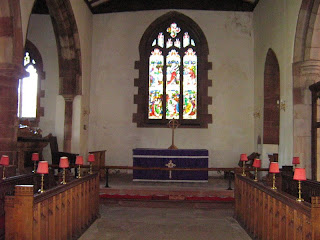 Here are a couple photo's of the stained glass windows. 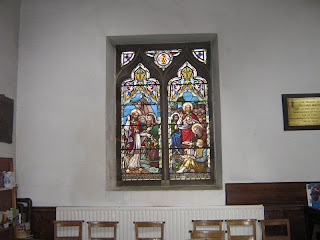 and the other one. 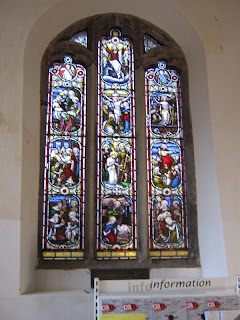 Here is the Alabaster Figure as a memorial by Lady Anne to her mother Margaret, Countess of Cumberland. 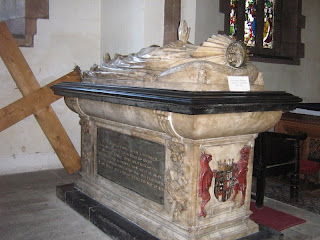 The church is open to the public, and we signed the guest book, and of course left a donation. That is the first time we had been in the church in many years. In fact it was the first time we had been right down in the town in years. We called in three years ago when dh's mother passed on to view her body and call in to see our next door neighbour who we have kept in touch with. I have to say I was shocked by the changes in the town, but as my mother pointed out to me, it is us that has changed not everyone else........I agree to a certain extent.

There is a castle in Appleby also, but is not open to the public anymore, not sure why. That also dates back to 1100's here is a link to more about that. One of the houses where we lived, when we looked out of our kitchen window, we could see the castle, didn't appreciate it then of course, but would love that view now!! Click here to learn more about Appleby.

So there you go a little bit of history.

(A side note for Paula, this post took me around half an hour to do, as I deleted my photos, so had to reload those, plus I had to do a little research to find links etc.)
at July 10, 2008

Hello I just stumbled on your blog via Rotten Correspondent. As I fellow brit living in Canada I will pop back and see how you are doing. Your budget project interests me. Also just being nosey I was looking at your garden photos and the school/building beyond your fence looks familiar - you don't live in Burlington Ontario do you? Or is just those cookie cutter builders at work again?

Interesting info about your 'special' church

I love old churches - we were married in a very old one (St Botolphs) in Colchester, right next door to a Roman Priory. Not a lot of the priory structure left but there are some of the walls still standing.

Forgot to say thanks for dropping in and yes please send some of your summer. 40c is my limit - beach weather yum

What a beautiful place.

thank you all for your comments. I appreciate the place more now that I don't live there, isn't that always the case?

What a gorgeous old church Gill....very beautiful. I can just picture a wedding in it.
Yes you're right we are mid winter here....spring will "officially" be the start of September.

Thanks so much for dropping by my blog.

What a lovely church. You are truly blessed to have made your vows in such a historical and beautiful place.

thanks Lisa for popping on by :0)