Figured I'd give you a reprieve from me being sick!!!!

My mam gave me my Nana and Pop's clock quite some time ago. Its not worth a lot monetary wise, but sentimental value is priceless. They were given it on their wedding day by my Pop's brother Jimmy. 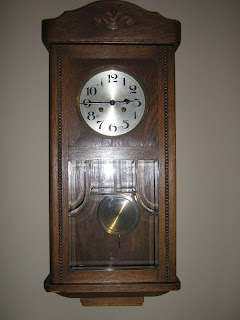 What's even more special my mam gave me their wedding photo. 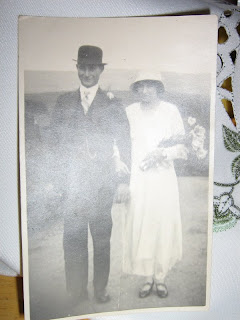 Along with their Marriage Certificate. They were married on May 23rd, 1934. I hope you don't mind, but I am only going to show you a couple of pieces of the certificate. This shows how old they were and what their profession's were. For some reason it doesn't say what my Nana did.............probably because she worked on the family farm. She was a really hard worker my Nana, as was my Pop. 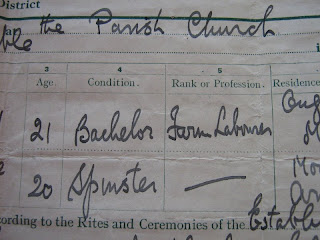 Here it shows the date they were married. My Pop's name was Thomas, and my Nana's name was Maggie Josephine, though she said it was really Margaret, not Maggie!!! 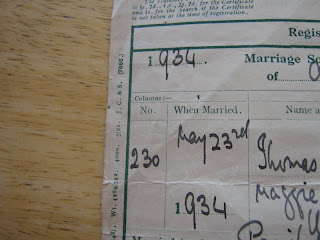 I should mention that clock is temperamental. It thrives in a happy household, does not like a woman winding it up, therefore dh winds it up once a week. I dust it and talk nicely to it. Infact if it stops unexpectedly, I am right on the phone to my mam to make sure everyone is alright. It chimes on the hour, and I think it chimes on the half hour, but we only have it chiming on the hour. My mam has one as well, as they got two given and the funny thing is, is when we are talking to one another on the phone and the clocks chime. We never hear it chime, but visitors do.

It belonged to two very special people that clock.
at July 31, 2008

Hi Gill,
wow, what Treasures you have there!
Hope you're feeling better!
Blessins',Lib

What a treasure you have!!!
You Mam must really love you to give you something like this.
I understand the word priceless.
Diane

Lovely! I'd love to have one of my nan's clocks. Thanks for sharing this and their wedding certificate. Really interesting. How are you doing today? Much better I hope.

thanks everyone for your comments, I am feeling a little better today, thanks......

Hope you are feeling better today.

Thank you for commenting on my blog - how did you find me.

Sorry you have been poorly and hope you are on the mend soon.

What a lovely keepsake to have!

Would love to see a picture of your pincushion when you get a chance to try it!

Thanks for stopping by my blog.

i love the few things i have from both my grandmothers' they are treasures to me. and i can see you feel the same about your family heirlooms too :)

How cool. Interesting on the Maggie. That's my mom's nickname and I always thought it was my Grandma's real name. However, my paternal grandmother's name on all her certificates -- birth and marriage -- is "Rachie." She named my father "Jackie" -- that's what it was on his birth certificate. I'm wondering if there's perhaps a little Scottish in your Nan :) the "ie" seems to have been common in some Scottish groups. My paternal GM was Scottish. And the genealogists insist on listing her as "Rachel." Annoys me to no end!

Thanks for sharing! I love those old documents. I have my GM's marriage cert, wedding photos & such.

what special memories! if you want more research done on the clock, let me know. evelyn

wow after numerous tries i think i was finally able to publish a comment!
Gill sorry you have been sick, hope you are better now. evelyn