When was the last time you looked inside a toilet tank?

I had a little bit of an "incident" this morning. Had me in a bit of a tizzy for a few moments, glad to say things are fine now though.

Let me explain something first. When God was handing out mechanical skills and power tool/hand tool skills, I wasn't in that line, I was probably in the shopping for bargains line. I totally forgot to go back and stand in the mechanical skills and power tool/hand tool skills line. So needless to say I am totally useless when it comes to those sort of things.

I put gas in my car, and that is it. I turn on my radio when I get in the car, so I never hear if there are any unusual noises coming out of it. Poor dh I think wants to rip his hair out with my poor mechanical skills. If I have a problem I have a cell phone and who is the closest, whether it be dh, my dad or the guys at work will get a call to come and sort it out. Same goes with tools, its faster and a heck of a lot easier if someone else does it. The different ends on screwdrivers confuse me, and honestly I have no idea what the other tools are called, and really no desire to learn the names.

For everyone's sake I hope I pop my clogs before dh, otherwise I don't know what I will do. Now I am not a total lost because I have other talents..........have yet to find them, but I do have other talents ;0)

So back to the toilet question. I go pee in the powder room toilet this morning and flush the toilet, it makes a funny noise, but I look in the bowl and there is water, so think nothing more about it. A little later on I go pee again..........I know I have a weak bladder, another sign of getting old. This time I flush the toilet nothing happens??? I am totally puzzled and freaked out, as its icky, I have peed and the toilet won't flush.

I should mention I have a thing about bathrooms. I like them to be nice and clean, I am picky where I park my royal butt. I don't care if the rest of the house is grimy, but the bathroom/toilet has to be clean. Luckily most people who know me, know that about me, and accommodate my freakishness!!!

Anyhow back to the icky toilet that hasn't flushed. Luckily dh calls at this time, so I tell him about my problem. So he says, I hope we don't have a leak. I gasp, as do I really want to go downstairs into the basement to find raw sewage all over the floor.........I'm gagging just thinking about it. So off I trot downstairs and thankfully there is nothing leaking.

Its the thing on the left of the photo. 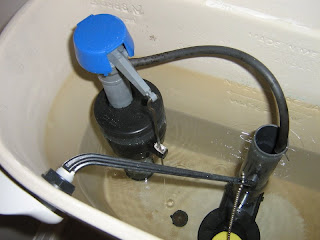 Now also as I have this thing about bathrooms, I wanted to tell you about a little experiment I have been doing. I got good coupons for bathroom wipes, those disinfectant ones, so paid next to nothing for them. I picked up two kinds the Lysol ones and the Mr. Clean ones.

Again a photo for your enjoyment: 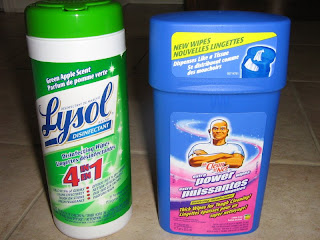 Now I have to say Mr.Clean wipes win hands down they are thicker, stronger and easier to get out of the container, which I think says that on the front of the container. So if you are going out to buy those get the Mr. Clean and there are coupons here for them. The dreaded Wal-Mart also usually has them at the best price. My feelings about the dreaded Wal-Mart are a whole new post, which I won't get into at this time.

So there you have learned two new things today, what it looks like inside a toilet tank, and what disinfecting wipes to use in the bathroom........my job is done here for another day...LOL
at July 11, 2008

I must say I haven't looked lately.LOL
I'm with you the bath and kitchen MUST BE SUPER CLEAN!!!!!!
HAve a great day!
Blessins',Lib

You see Lib, I knew I couldn't be the only one who has not looked in their lately!!!

I am a toilet fixing master!