Photos of the Attic and Molly

So if you look at this post you will see some of the "before" photos of the attic. The ones below are all photos of where we are at now.

You have seen the stairs before I know. We have cardboard on the treads to try and protect them; nothing really interesting there. The screen is out of the skylight as that way we can get rid of the cluster flies more easily!! 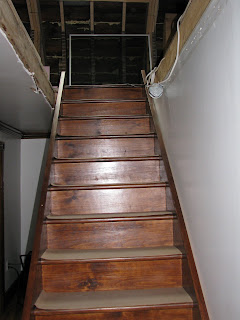 This one shows the end which will be my sewing "studio," isn't that a fancy name for it. It also shows the vent thingy's that dh is putting in all along the roof. Any new wood (it's lighter than the old) is where they had to add wood to shim it out so its all the same height. 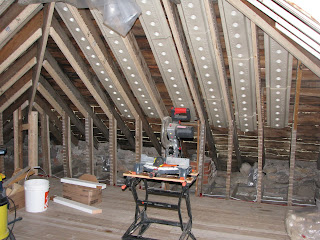 This is the opposite end, which will be a bedroom. Dh doesn't have all the vent thingy's in yet. We have added the two vents for the bathroom fans (the black piping). The upstairs bathroom had no bathroom fan at all and the downstairs bathroom fan's pipe just went into the attic.

The rectangle piece of plywood on the floor, that is where the old stairs used to open up to in the attic. Part of it is still there, as we haven't got around to pulling it all out yet. When we have pulled them out, we will make that area into a linen closet as the door is in the bathroom. Notice the skylight to the left of the photo. 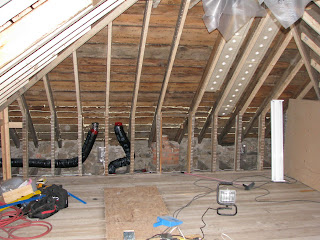 This is Molly inspecting the hole in the floor. We are going to be putting up a 3 foot drywall half wall all around the stair case opening. It will give us privacy in the attic, but also dh is bringing up the electrical through that wall, plus the telephone wire and a wire for an electrical wall heater, if we decide to put one in on a later date. There will also be three sockets in that wall which will be super handy. In total there will be 11 sockets/double plugs in the attic.........I know overkill, but its better to have too many, than not enough!! 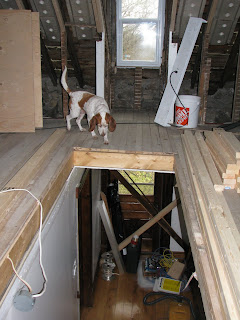 We, or should I say dh had to move some plumbing and my dad built this box around it. It will be altered slightly and covered in drywall so you won't see it, but there will be a kick in the wall. 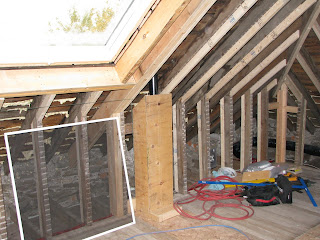 Finally one of the jobs was to knock out some of the stones for ventilation. It was surprising how long that took, and that is what the photo is about. 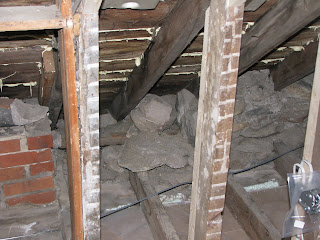 Dh made a start on putting the insulation in on Saturday and got what he wanted done. He'll be doing more on Sunday, and will hopefully make a start on putting insulation in the roof.
Took Molly to the vet again, and it cost me another $150. I told her we can't afford to be paying such high bills like this every three weeks. Anyhow, she gave me some antibiotics to heal up between her toes where she has been chewing, and some of the bright neon pink wonder pills, to help her stop chewing. She would only give me three weeks worth, as we should be seeing a difference by then, as it will be colder, and she will have been on her vegetarian food for six weeks by then.
Dh had a point, these allergies were maybe why her prior owners got rid of her? I just hope this helps, as it must be awful for her, all this chewing and scratching.

Poor Molly. She must know she is loved through all this agony.

Have you tried spraying "bitter apples" between Molly's paws. In the UK we can buy this spray to stop dogs chewing or licking their paws etc - they hate the taste!

why dont you set too with some 3 by 2 and some chicken wire etc and build poor molly a run so you dont have to tie her up .
that way she can run about a bit and you dont have to worry about her running off.
you could put some of her toys in and she wouldnt get bored - the freedom might improve her well being...

poor molly, glad she now has a devoted caring owner willing to take care of her. love all the renos in the attic!

You've got hearts like lions all that hard work.

Poor little Molly. Is it too late to get her insured?

You attic looks like it's coming along very nicely!

As I've mentioned before, one of my mom's German Shepherds has very bad allergies and one of the things she was allergic to was all things wheat based in her food. As soon as she cut that out of her diet her allergies got better, although they didn't disappear as she seems to also be allergic to all things pollen...

What food is she on? My Lab was really allergic to one type of meat only, whenever he was on that food he did very poorly, lots of licking his paws all the time. As soon as he was off the food, his allergies cleared up.

Gill the attic is going to look fantastic when completed. You guys have really taken on a huge project but it will be worth it in the end.

Molly looks like she is fitting right in and want's to investigate everything. Hope her allergies clear up soon.

Did you send the mice here? Guess who now has one in our house? First time in 8 years. I think we might get another cat!!!

Your house is really looking good. Can't wait to see it all finished.