Tuesday I wasn't feeling the best, so I didn't do much. I did a load of laundry and as it was such a miserable day, I ended up putting them on the clothes horse to dry in the family room. The house was cold, but I didn't put the fire on until 1pm. The house was reasonably clean but not as clean as I would like. Then just after 1pm, there was a knock on the door, and my dad and a British couple who are staying at my dad's and step-mum's house stroll in.

Of course the fire wasn't co-operating, I haven't been shopping for two weeks, so didn't even have a cookie to offer them. I mean isn't it always the way when things aren't looking their best in the house, visitors arrive?

Fast forward to Wednesday by 12 noon the house was tidy the fire was on; infact the fire lit itself!! How did it do that you ask; well it was so windy that I decided not to clean out the ashes in the fireplace. However I laid the fire, by putting in newspaper and sticks ready to start the fire later in the day. By around 11am I heard crackling from the fireplace, and it was burning. There must have been some hot embers in the fireplace and they set fire. Oh and by the way never saw a soul all day, other than the UPS guy, who was wearing shorts and a short sleeve shirt, in this weather!!!

Next time the house looks a mess, I will no doubt get a pile of visitors!! 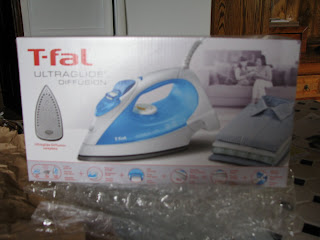 I only ordered it on Sunday (see this post) and thought it would take a month. I haven't tried it yet, but will try it on Thursday. Nothing has gone to waste either in the packaging, as I will re-use the bubble wrap and brown paper. The UPS box it came in I am using as a box to put Molly's toys in. Which is turning out to be a game for me and Molly; as I put her toys in there and she takes her toys out, and back and forward it goes...LOL By the way dh and Molly have made up and are best of friends again!!
Posted by Gill - That British Woman at Thursday, October 08, 2009

Bet you never thought when you were twenty you'd be so happy to see an iron!

Liz in a thunderstorm with DearDog

I have the same iron and it works great :o) And don't feel bad about the fact you weren't prepared for visitors, they didn't announce they were coming, after all!

Nice iron...hope it is all you want it to be. I love my iron, use it everyday quilting!!

Glad to hear Molly and dh have made up.

I have the same iron too. It's been excellent, steams a treat and I love the non stick bottom if you pardon the expression!

Have to say anyone arriving most days would be hard pushed to find my house tidy.