A couple of quilting blocks and other odds and ends....

I made these two blocks for a baby quilt, they were foundation/paper pieced. A lady I know through another site is having a baby, and asked if anyone would like to make some blocks and she would put them all together to make a baby quilt. We each had to donate a block. I made two, just in case she was short. She doesn't know if she is having a boy or a girl, but I was drawn to these colours, so maybe my gut is telling me she is having a boy? She already has three girls and three boys, so I am guessing it won't really matter if its a boy or a girl, as long as the baby is healthy? 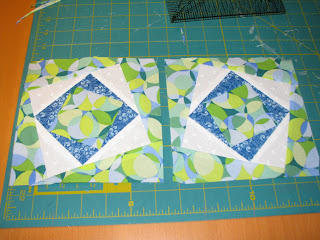 I finished the book "Seeking Catherine Cookson's Da," by Kathleen Jones, it was an easy ready and was really good. One thing I do know from this book is Genealogy is not as easy as it looks. However she has a lot of good tips about finding people at the end of the book. It turns out her dad was a bigamist. He left his wife in poverty with three kids, had an affair with Catherine Cookson's mother, the result was Catherine, and left her, and then "married," another woman and they "adopted" a girl and brought her up. Quite the story and quite complicated at times!!!

Molly is a whole lot better already and its only been two days. She has more or less stopped the scratching and has totally stopped the chewing. The only problem is she can't be on these pills at this dosage for ever more, as they do contain a mild steroid in them. We will be dropping the dosage slowly over the next few days so will monitor to see when the chewing starts back up again.

Otherwise things are quiet around the Acreage. Still have cluster flies {SIGH}, still finding the odd ladybug {{SIGH}}, but haven't caught anymore mice {{{YEAH}}}, so hopefully the two I caught last week, were just stragglers from the other week!!
Posted by Gill - That British Woman at Monday, October 26, 2009

Very nice blocks. I'm sure you sent the mice this way just because I send the weather your way, lol.

Glad to hear Molly is doing better, that is awesome!!

The colours are pretty, but they don't look finished. Is that deliberate or is that what they looked like when you were at the cutting out stage? Did the blocks have to be a certain size for your friend? I'm interested in hearing more.
Blessings, Star

Such a lovely color combination...reminds me of sea glass and old bottles.

Hope you are doing well! We stopped by a farm stand at my Dad's house in San Diego yesterday and were blessed with an amazing bounty of limes, watermelon and tomatoes (last of the season) and was wondering what in the world I was going to do with them all. That's when I thought of you and and the many lovely recipes and links you have on your inspiring blog! I've already looked up a few and found a watermelon and tomato salad with balsamic vinegar (sounds delicious) I'll probably add a bit of lime juice to that and then dehydrate the rest! :)

Also, wanted to thank you for the synopsis of the book regarding Catherine Cookson's Da. It sounds very intriguing. These days are so buy I find myself reluctant to spend time on books and movies unless they are recommended by those I trust. Today I am doubly blessed because I just read about a good family movie on Scrappy Quilter (Carol:) and now a good book review from you! Thank you. Also, need to tell you how I appreciate all your recipes and links. I know how time consuming it is to compile all of them. If you don't mind, I was thinking I might link to your blog from my FLFood blog. I'm sure others will find them as useful and interesting as I. That is, if you don't mind.

I'm off now to actually "do" instead of read and or write about it! (Books and blogs...so addicting at times. :)

Take care and let me know if the link is a problem (won't do it 'til I've heard back from you).

Good thoughts and thanks from...
Tracey.

P.S. We're hosting two giveaways (our books) on the blogs--until Nov. 1st. You're more than welcome to participate.Thanks again.xo

So glad to hear Molly is doing better!