More mushrooms and other bits and bobs, including Christmas...

If you have followed my blog for a while, you know I hate doing the Christmas letter that I include with my Christmas cards. I like to include it, but hate writing it. So this year I came up with a different plan of action. I decided to make a start on writing it on Monday, and it came together so easy for a change. I have more or less got it done. Leaving it to November I think makes it more stressful and harder for me to write.

I took the photo below of our house and I thought I may include this photo in with the Christmas card, as most of my Christmas cards go to people in Britain, and a lot of people don't use the Internet. Do you think it is suitable? 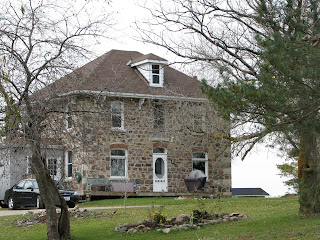 I had noticed on the driveway that there were three trees with mushrooms growing on them, so I thought I'd take some photos of them. 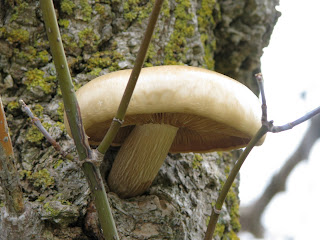 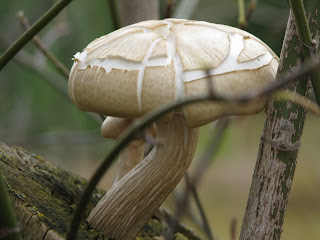 I have been watching a show called Victorian Farm which has been on TVO in our area. Has anyone else seen it, its pretty good. I think its a continuation from the Victorian Kitchen and Garden series which I also watched when it first aired.
In Ontario its now against the law to talk on your cell phone while driving, unless you are using a hands free device. It won't be an issue for me, as although I have a cell phone, more often than not, I forget to switch the thing on, and if I actually do remember to turn it on the battery is generally flat!!! Is it against the law where you live to talk on your cell phone when driving?
Posted by Gill - That British Woman at Tuesday, October 27, 2009

Like the looks of your house including the fungi! The Victorian Farm aired over here in the UK, I think it was early last year. As for mobile phones, I possess one like you, but never use it! The ban on the use of mobile phones whilst driving has been law here for some time now.

Love the house picture, definitely include it. And the bottom mushroom. Is it going to be included as well?

It's been illegal to use a mobile phone while driving here (NSW Australia) for years. People still do it constantly though!

In Nova Scotia it's illegal to talk/text on the phone while driving, and it's also illegal to smoke in a car with under-16's in it - or it may be younger. [Not having kids - or smoking - it didn't 'stick'.]

I really like that last mushroom photo too and I think the house photo is lovely as well, definitely worthy of inclusion in you Christmas cards.

As for the cell phone, it has been illegal to talk on one while driving in Quebec for a while but a lot of people still do it, namely my brother...I never do it, I always pull over if I can right when the phone rings or I tell the person I'll call back as soon as I can pull over.

so like the house pic...yes, do include it in your card. and i would send one of those crazy mushrooms pics too.
have a wonderful day gill.
hugs

Like the house photo. When it snows you could take one for next Christmas. Will be gorgeous with those trees in front.

It's been illegal to use a mobile phone when you're driving for over 2 years in the UK but it hasn't stopped idiots doing it. The police seem to ignore it unless there's an accident. Not enough money in it I suspect. Now speeding, that's another matter! What I don't understand is why people are so obsessed with answering mobile phones immediately? I just ignore the phone if it rings in the car or if I'm talking to someone. It's hardly likely to be an emergency.

I saw some of The Victorian Farm programmes, quite a hard life they had. Your mushroom or toadstool photos are brilliant.

Oh my. You said Christmas. How many more days?

Manitoba now has the same thing in regards to cell phones.

I think the picture of your house is perfect to put on a card. Hugs..

I agree that's going to make a lovely winter scene for a photo. If you decorate now you could even make your own cards for Christmas.
Just saying....
:-)

I think the photo of the house would be lovely. Only suggestion might be to hang a large, plain, green wreath somewhere on the front - door?

It is a LOVELY home and will make a beautiful picture for your Christmas letter no matter what.

Yes, illegal here. My husband spoke to me for a few seconds this morning, though I don't like him doing that. It is hard where we live to figure out when he is not driving, but I try.

I love your stone house! I make my own Christmas cards. After I decorate I take a photo of something for the following year and do 'From Our House to Yours'.
The mushroom shots are fantastic. Your favorite made a wonderful header shot.
It isn't against the law to talk on cells in WV yet but I think the day will come.