What a dirty icky job and other stuff.....

So on Monday morning I got up bright and early and went into the attic to remove 45 garbage bags of plaster out of there. Believe me I counted everyone. I wasn't perspiring, nor was I sweating, water was pouring out of me like a tap!!! I swear if I don't lose any weight with all this exercise I am going to be royally ticked. I hauled the bags down to the bottom of the attic stairs and stacked some there, then hauled them down the main stairs and out onto the front deck. It took me around two hours or so to do this, and then I had to tidy up, as despite my best efforts I still made a mess. It is a dirty icky job and I know Carol will totally agree with me on that. We cannot haul it out of the window, as the roof is in the way, so this is the best and fastest option.

I then remembered to take some photos, for a change!!!

So the first one, is of the stairs. They actually look rather nice in the photo but they are very narrow and are damaged. I might put an ad in the newspaper to see if anyone wants them, when we get rid of them. 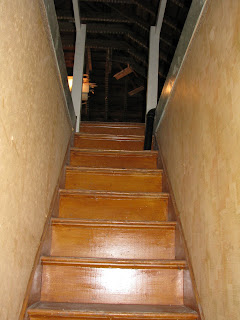 As you can see it is a nice high roof, that dh still has to strip the knee wall. We are saving the baseboard/skirting board to reuse again. 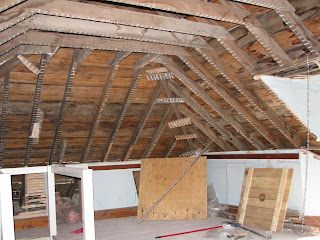 The piece of plaster left in the ceiling is the only electric/light source, so until dh wires up the place we need to leave it in. 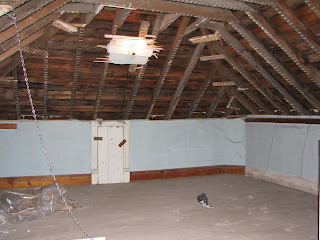 This one shows you where the dormer window is at. 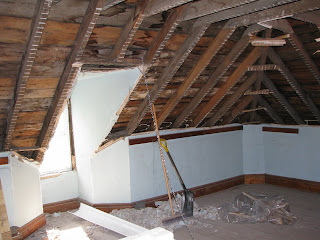 We are going to put a skylight in above the area, where the plastic is, as the roof has been repaired with a couple pieces of tin there, so that will get rid of them. 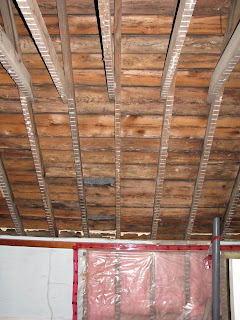 Finally this is a photo of all the bags sitting on the front deck. 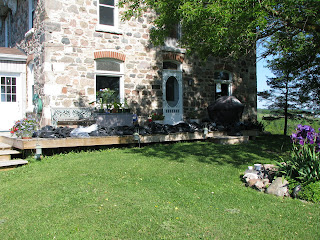 The goal is to have the rest of the plaster stripped off, removed, and all the old insulation removed by the end of the week. Dh has Thursday and Friday off which will hopefully help, although he is still in an awful lot of pain with his shoulder and elbow.

We had a guy over Monday to give us a quote on putting the skylight in, repairs to the roof and to insulate the attic. We had met him at the home show back in February/March. The company he works for seems okay, so we'll see what happens when we get the quote from him.

I got the bill in Monday for the internet, and if I wasn't confused before I am now. As per the leaflet on the charges, I should have been charged at least $50, plus various other charges, so it would have probably come to around $70+ I got billed less than $25, why I have no idea. I of course will not be calling them to find out why, but I will say Bell Canada has me totally confused?

I also managed to get Kamakazie Hill cut on Monday, and it only took me 2 1/2 hours, the fastest yet. I am still not 100% happy cutting it, but its getting easier for me.

So all in all Monday was a super busy day.

I'm rofl here because I know about all those bags....we had cheese bags that we used for 3 rooms upstairs and the living room, kitchen downstairs. It was a horrible job, however well worth it. You have a wonderful attic, can't wait to see when it's all done. Remember though friend, you need rest too!! Hugs.

Are you an energizer bunny or something! I know ya want to get it doen but.....

I was just going through some of my old posts and was wondering if you had any tomatoes yet this year?

wow what a job! maybe the bill is for half month, did it say how many days? evelyn

I didn't realise just how much you had to move until I clicked to get a bigger picture. Well done you, what an effort.

well done. you have got loads done on the house and it's nice to see the photos. love the front of the house, the stone is beautiful. I feel quite lazy by comparison when I read your blog. but I'm hooked! :-)

Oh my you're putting me to shame! You are going all out there Gill. Love the house front. I can't believe you spend so much time having to cut grass and no danger money either.