The first one isn't in focus sorry, but it shows Molly's favourite toy, her Hedgehog, she takes it to bed with her on a night. I had to resew its nose as she chewed it off. 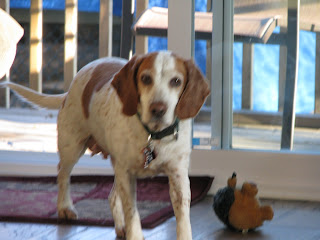 This is Molly sitting on the sofa. I was shocked to see her jump on the sofa, as she normally only does it when dh is about, as I shout at her to get down. Mind you with those eyes, how can you refuse her anything? 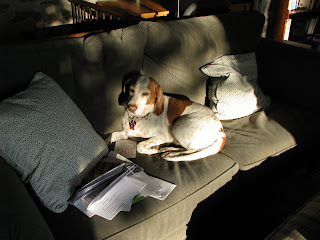 Though saying that on Monday she was driving me crazy with her barking. I was cutting the lawn and had her tied up, but she wouldn't stop barking, at what I have no idea.

I have been letting her wander about on the back deck, by blocking off the steps with the patio chairs. Well today she "escaped," fortunately she didn't wander too far and I was able to catch her without having to run after her. So until dh makes a proper gate for the back deck, I can't let her off the leash.

When we first got her, although she is short haired she shed like a crazy person. I am pleased to say that seems to have come to a stop, not that there isn't dog hair on the floor, it's pretty minimal, which is good.

Can't believe its September today, where have the last four months gone too, as we moved into this house on May 1st, 2009. I am finally beginning to see a difference, and can see where some of our hard work has gone to. I will have a before and after photo on Friday for you.

They have gone and changed the time for Coronation Street to 6:30pm now, what the heck??? What a stupid time of day. Luckily we can pick up the channels from out west, so I'll have to find it on one of those to watch at a later time. Its bad enough that Eastenders is on at either 12 noon or 4pm, but to move Coronation Street is just not on!!! At that........Gill stomps off in a strop!!
Posted by Gill - That British Woman at Monday, August 31, 2009

I love Molly...she looks so comfy on that couch. Our Ginger loves jumping on the couch too and with the look she gives us...well she seldom is made to get off.

Oh my, Coronation Street? I haven't seen it in years...I try to keep with the Beeb's offerings on BBCAmerica...but they seem mostly to cater to SciFi these days...love your Molly and dh really does need to get that gate up. Here's what you do...get out the measuring thingy and get some wood and lay it by and nails and such and he'll ask what you're doing and you say building a gate for the deck and then next thing you know he'll take that little chose off your hands...it's how I get most of the crap I don't want to deal with done around here.
Sandi

I get that crazy shedding from foster cats when they first come to us. A move seems to be a trauma for them and they'll shed like mad for a few weeks to a month and then stop. Maybe it's the same with dogs, then. Your Molly is adorable. :)

Your Molly sure is a cutie! (Almost as cute as my Molly!)

Quite the soap addict here, I watch Corrie and Emmerdale as they are on and have the omnibus of Eastenders recording on Sundays, lol.

Funnily enough, have never missed my US NBC soaps . . . these here in the UK seem so much more realistic and not as far-fetched!

i know corrie at 6.30. i just caught the end last night. i don't mind the new time actually.
tho' the show is so bad now i don't care when i miss it anymore.
:-)

Maybe the mower made her ears hurt. Does she normally bark when you are mowing, or is she usually indoors? Then again, perhaps she didn't want to be on a leash.

Molly is gorgeous.. If she starts shedding again you can buy dog shampoo which has anti shed stuff in it. xx

She truly is adorable Gill.