We went to the Toronto Humane Society on Saturday and I fell in love with Molly. She is a 5 year old Beagle, and they said she was a stray. She was just fixed on July 26th, 2009, but to look at her you would think she had just had pups. However they did say she wasn't lactating so not sure what is going on. They did operate on her as she had three lumps that were all non-cancerous.

She has really settled in well and we think she was well looked after as she is a good weight, just under 40 lbs and does know some of her commands when she is listening. She waited to pee and poop outside, which is a good sign. I took her for a walk around the acreage and she was eating grass, so she may have an upset stomach, we'll have to watch her.

She did however shed like a crazy woman on the way home in dh's van, so he wasn't thrilled about that, so I now have to clean his van to keep him happy. It will be the one and only time Molly will be in the van, as he hates having dog hair in it, he was the same with Maxine. 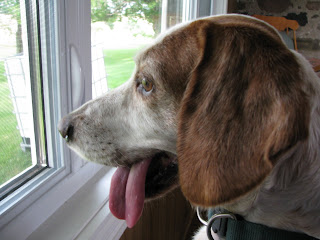 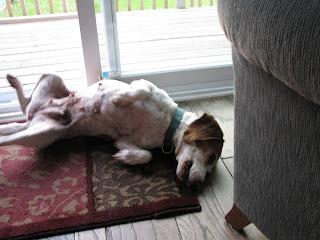 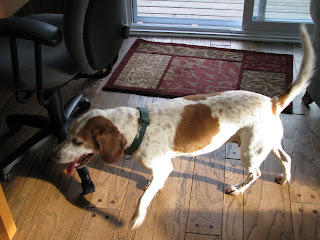 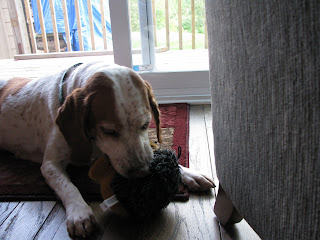 So as I said we go to the Toronto Humane Society. Now that is in a rough part of Toronto if you ask me. We didn't click there was a parking lot behind the shelter, so we park on the street, and I say to dh I hope the van doesn't get broken into. As there were three young women hanging out in front of their house with the music blaring, and they looked iffy to say the least. Anyhow we discovered that there was parking so I made dh move the car.
Today was Caribana downtown, so the traffic was horrible. Have to say I haven't been to Caribana before, and from what little I saw from the road I'm not missing much. The trucks were full of these huge speakers. I would have been deaf if I had, had to stand on one of those trucks, listening to all those boom, booms all day!! You should have seen all the licence plates from the States, especially from New York State and Illinois. Plus the Toronto Argonauts were playing at the Rogers Centre, so a lot of traffic going there.
On the house front, after many problems we got the toilet repaired, however as with everything in this house, nothing is simple, and it took a whole lot longer than it should have done to put it in. We didn't get anything else done, as we were out most of the day getting Molly.

As I am writing this on Satuday night, Molly is settled into her basket...... 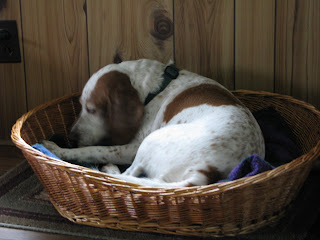 Fantastic! I love Beagles. Now you REALLY have a home.

Molly is adorable!!! What a great life she'll have on the acreage!!

a welcome addition to the family. Hope your house job go well today

Congratulations on you rnew arrival. If she looks like she has had pups it may be because she has had itters in the past. If they are too close together, it leaves it's marks!
All dogs eat grass...it is their way of worming themselves...instinctive.
She looks lovely and how nice to give an older dog a hom ;-)

Congrats on the new addition to the family; dogs are great, if you have the room. I'm jealous.

my dog eats grass too. what a sweet dog! hope you aren't allergic?
I saw caribana on the news, not that newsworthy in my honest opinion. music was loud and horrible, seems like a drunken revelry. must be a slow news day in Canada?

First time visiting your blog. Love that you adopted a needy dog. We have 6!

She is gorgeous and looks perfectly at home.

She is gorgeous!! I love beagles too :-)

What a beautiful dog. Looks like she has settled right in. Perfect for your homestead.

What a pretty little thing!

I love your Molly. We lost our Ginger two summers ago and the house hasn't been the same since.

Welcome Molly. I think you have found a very good home. Good luck Mom and Dad with the doggie. Hope it all works out for you three.

Welcome home, Molly! You're going to fit right in!

Hi, I found you on Margaret's Ramblings. Molly is wonderful. I am having puppy fever now. We just have Gracie, a three-year-old German shorthair now, but usually have two dogs. I am glad you went to a shelter. That is probably what we will do when and if...

I wrote a post a few days ago about all the dogs we've had in our family. We couldn't do without 'em.

I think the dog and the basket look made for each other.