Photos, and for the women out there, you're going to LOVE (not) this one!!!!

Tuesday was a super busy day for me, and I spent most of it outside in the garden. Ds came over and he trimmed half the border of the property with the whipper snipper, which was such a help to us.

One of the first jobs of the day was to dig up all the potatoes as the tops were dying. I was pleased with what I got, and am hoping to blanch the bowl of small potatoes and freeze them so we can eat them on Christmas Day. However when I was looking through a recipe book regarding this, they don't recommend freezing uncooked potatoes? My Aunt in England does this though with great success? Any tips from you? 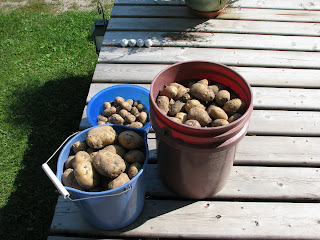 I also did some weeding while I was in the veggie plot and had another trailer load of weeds. I cleaned out the butternut squash bed, and am pleased to say I have plenty of flowers on the plants, but no butternut squash as yet. Still I am hopeful. Remember I hadn't planned on doing a veggie garden at all this year!! 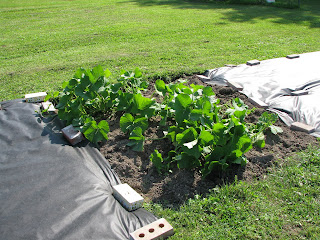 I also laid down some black weed barrier between the veggie gardens to kill the weeds in the hopes by October I can dig some more land for vegetables for next year. 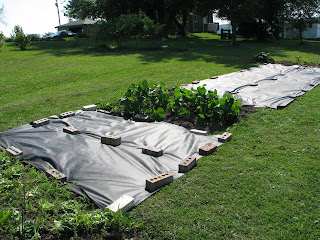 I also cleaned out my tree nursery, only to discover I only have two trees left and they don't seem to be growing that well? Still they were free, so I'm not out of pocket. 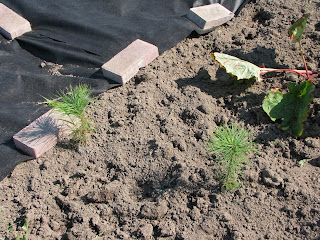 Here is a photo of my grapes, there seem to be quite a few bunches, not sure what I am going to do with them though? 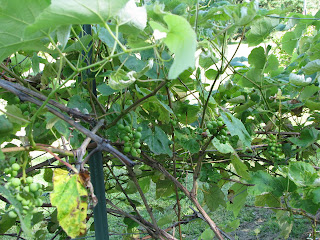 Remember last week when I took some photos of the combining in the field opposite us, it was in this post. Well Jim is now baling hay, and we were watching this while we were eating our supper. Here are a couple of photos: 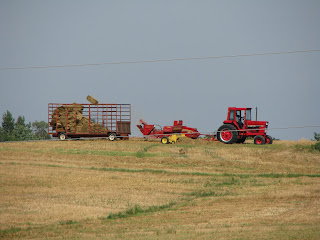 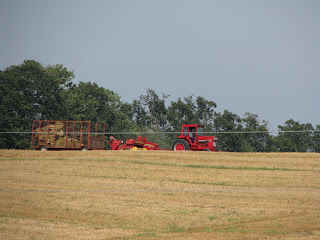 A sheik "explains" the differences between men and women's brains (I am rolling my eyes, just writing this, as I have watched this) I first saw this over at Crafty Mamas.

I am actually lost for words for a change, with this. Don't you just want to smack him over the head or tell his mother to do it!!
Posted by Gill - That British Woman at Wednesday, August 26, 2009

Email ThisBlogThis!Share to TwitterShare to FacebookShare to Pinterest
Labels: farming, gardening, you tube

we have the same problem with potatoes at work. it is a potatoe blight and will kill the potatoe. you either have to dig them all or cut all the tops off to keep it from spreading. I have never had good luch withn freezing potatoes. they will store for quite awhile in a cool dark dry place.

Maybe we should bring all our soldiers home. But before they get on the plane, each one will be required to train one Iraqi woman in the use of his battle rifle. She gets the rifle and ammo. I predict a quick end to that war.

I don't freeze potatoes either. Even when the tops have died down I leave them in the ground until the second or third week in Sept. I then dry them (don't wash them) and put them in our basement. I make sure they are dried well. They usually keep well until late Feb. I plan on getting some of that black weed barrier this week too. Hope it works well.

get your potatoes directly from the garden peel wash or scrape remove any deep eyes bruises or green colouring form of flesh .Cut into half water-blanch for 3-5 minutesdepending on the size the potatoes should still be somewhat firmafter blanching cool and drain then pack them in freezer bags leaving about 1 /2 inch of headspace ,Label seal and freeze potatoes can also be boiled whole with the skins on before being frozen . Cook until nearly done. Remove ,cool peel skins off wrap in plastic wrap and place in freezer bags .label and freze .To prepare ,finsh cooking in water or microwave then your potatoes will be ok for xmas lunch just think only 125 days to go !!!!

Gill, I think it's fine to blanch and freeze potatoes. I've done it before and lemme tell ya--it's soooo nice to just pull already processed potatoes out of the freezer. I much prefer those to canned potatoes, which come out a bit rubbery and odd tasting.

Manchester Lass, Now and Then said...