oh and it is meatless, just in case you're thinking I have found a good way to use up all the dead mice...LOL

Anyhow, the mice situation is that I only caught two mice on Sunday/Monday, BUT I have managed to lose one of the traps???? I mean it's gone, both me and dh have looked and we can't see it? It's the strangest thing ever. We know where they are coming in though, so that's good; we just have to get on with blocking up the holes!!

I tried a new recipe on Monday called Jumbled Pasta Bake from this website I didn't have any Carnation Milk, so just used regular milk. I had some zucchini that needed to be used up, so this was a good recipe to use it in. I split it into two casseroles and each one will feed three people. I will freeze the second one, and I used a combination of breadcrumbs, parsley and grated cheese as a topping, as I didn't have mozzarella or Parmesan cheese for a topping. 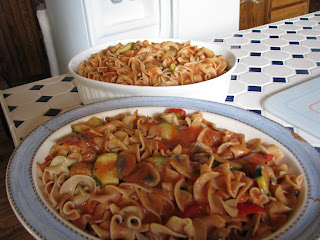 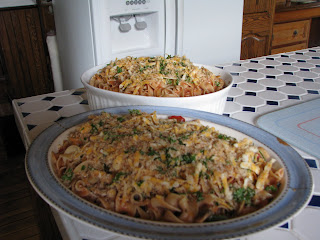 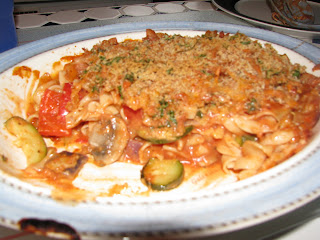 By the way for those of you who look for a post first thing in a morning, the Internet was so slow last night it was crazy. I attempted to upload a photo a gave up there was no way it was going to be doing that. The sooner dh sorts out something else the better it will be!!!

I should have mentioned this yesterday but this is my 701 post!!
Posted by Gill - That British Woman at Tuesday, September 29, 2009

In our previous house we had a mouse motorway running through our airing cupboard in the bathroom. We once lost two traps - we concluded the traps snapped shut on the tails of the mice and they ran off plus the trap!

Only G. Gordon Liddy would take the mice!

Gill, if it's a small hole you can put an SOS pad (or a couple) in the hole (if it's not too big) until you can get it fixed. They won't go through it!!

MCC is Mennonite Central Committee. They have a huge sale each year. It's a two day sale where they auction off quilts, have a pancake breakfast, sell craft goods, baking, veggies and meat along with books and yard sale items. All the money raised this year went to projects in the Sudan.

That pasta bake looks delicious! Better not walk around without shoes for a while until you locate that mousetrap though...and congrats on being such an awesome poster!

vegetarian dog - its not just dad thats thinking it
and 701 blogs - just think all that time typing instead of doing.....
heres a good one for you - im typing and sending this from the wagon parked up for the night in a layby - now theres me catching up with technology at last
nick

I appreciate the skills of your blog writing and the time sharing with us.
I find the valuable information is provided by you.

I recently came across your blog and have been reading along. I thought I would leave my first comment. I don't know what to say except that I have enjoyed reading. Nice blog. I will keep visiting this blog very often.