Photos from Meaford....and another new to me quilting store

Now I will say the only reason we headed to Meaford on Tuesday was that there was a quilting store there and I wanted to take a look. One of the first things we saw when entering the town was all these scarecrows hanging from the lamp posts which was different. It turns out on October 2nd though 4th, its the annual Meaford Scarecrow Invasion. Here is another link about Meaford

I did ask the lady in the quilting store about what else to see in Meaford and all she could think of was that event? Not very helpful if you ask me!! 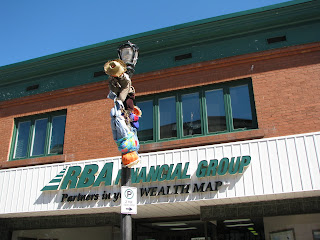 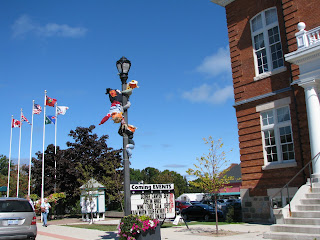 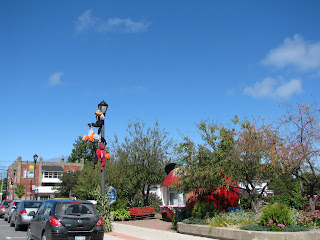 This mural was painted on the side of this wall and it was quite neat I thought? 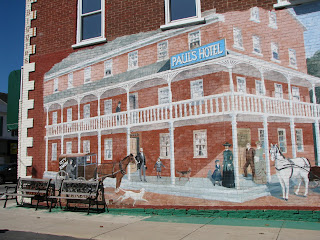 On Thursday afternoon we had to run a couple of errands in Shelburne, so we decided to eat out at lunch time. The owner of the No Frills in Shelburne, who is the nicest guy ever, recommended The Junction Family Restaurant in Dundalk for really good fish and chips. As we were going that way, we decided to go there. We have had better, and have had worse. If we're passing there we will pop in again.

We then headed to a small "village," called Maxwell, as one of the ladies at the knitting club mentioned they'd been there and liked it. Its called Threads That Bind and its a lovely little store. I of course HAD to buy a couple metres of material, like I need MORE material. Its a bit far for me travel too, but I see they are going to have an online store. They did have some really nice jigsaw puzzles, with a quilting theme that I would love to own. It was a nice drive and there are a number of Mennonites that have moved in the area. I of course forgot my camera, so didn't get any photos.....

Email ThisBlogThis!Share to TwitterShare to FacebookShare to Pinterest
Labels: a day out, Meaford, photos

In a small town close to us they have scarecrow days the same weekend. They have a town wide yard sale, a large flea market, along with a number of other events and the town decides what the theme will be for that year. One year it was Elvis, so all the scarecrows were Elvis (quite funny actually). We usually go to the town wide yard sale, however this year we've decided to go to a large craft show instead.

Wow you're finding all the quilting stores. That's a good thing!!

The decorating committee from Meaford were on Breakfast television this morning.

Hi Gill, just been catching up on your last week, its go go go isn't it! I can always think of good excuses to buy fabric LOL.

Small towns are nice. Enjoyed your photos, the one of the mural was lovely.