We were woken up the other night around 1:30am, by a blood curdling scream. We have a pack(s) of coyotes in the area, and one pack was killing something, and that something wasn't a happy camper. The coyotes were howling, and the next minute so is Molly....scared the living daylights out of us.

Then on Wednesday morning around 7:30am, I was hanging out the laundry and saw four smallish deer playing in the field behind the house. I was surprised to see them out and about at that time of day. It was a nice way to start the day though.

Miss Molly decided to go walkabout after "escaping" off the deck AGAIN. Thank goodness her nose keeps her occupied, as she didn't get too far before I got her back on the leash. I am terrified she goes onto the road, as she has no road sense.

On Wednesday was my book club meeting. We had to read "The Secret Scripture" by Sebastian Barry. I personally wasn't keen on the book, but it was really interesting what everyone had to say about it, and how they understood the book. Between me and you they were all a lot more intellectual than I was. Still I enjoyed myself. They also have a knitting get together every Wednesday from 2pm until 4pm. So I brought along some quilting that needed to be hand stitched and got on with that. I might go every Wednesday just for the get together, as they are a nice bunch of people.

October's book for review is Margaret Atwood's "Payback: Debt and the Shadow Side of Wealth." Even the title scares me.......when I read the review I figured it really wasn't my kind of book, so I think I will skip this one!! One of the guys at the book club on Wednesday was saying it was hard going, and he was a right intellectual!!

Here are a couple photos of the book store, it's really pretty isn't it? 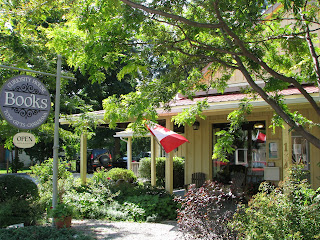 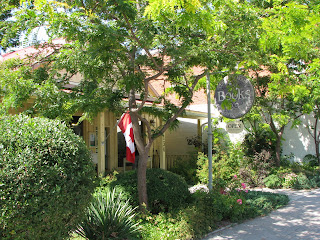 Creemore Springs is the name of the local brewery and beer. 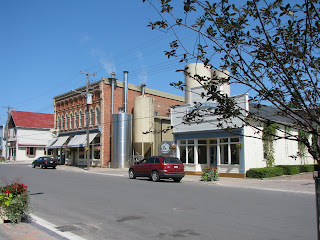 This is looking up the main street of Creemore. 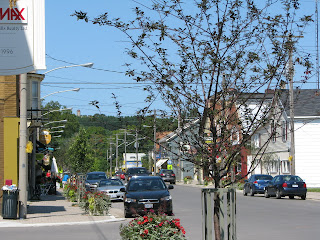 I had a major problem getting the photos to load with Blogger. Is anyone else having the same problems?
Posted by Gill - That British Woman at Thursday, September 03, 2009

I listened to Margaret Attwood reading Payback on BBC World service and was so hooked I borrwoed the book from the Library. I'm sure you'd enjoy reading it and hearing others opinions too. She has an interesting way of describing her views.

Our bookclub book is Dewey. Loved the book and can't wait to get to bookclub on the 7th. It should be quite interesting because many of the people who read the book aren't cat people.

I'll have to mention these two books to our bookclub.

Oh go to the Atwood Payback bookclub thingy. Sure she did them as Massey lectures but not at all what you would think. I mean, look at her. High powered finance? I think not. (BTW She reminds me of my arty auntie.)

The book store looks so quaint and pretty!

the book place is quite lovely so serene looking,
wow coyotes! you'd better keep an eye on Molly!

Wow, what a cute little bookstore! So quaint, and a perfect place to knit or sew while discussing books!

never liked Atwood so can't blame you. i am reading a series by Bruce Alexander.

Sounds like a lot of fun. I really need to get back into my reading and haven't picked up a book for quite a while, though I have plenty around here to get stuck in. The photos were great and very interesting. I can see waking up to that going on would have been pretty scary. Not having any trouble loading up photos, so it is probably just a temporary glitch.