Me and dh spent the morning in the house. He was finishing off installing some shims in the attic, while I was tidying up downstairs. I had a look at the attic to take some photos, but honestly I don't think you will see much of a difference, as all the jobs he has done are "behind the scenes jobs." However if you want I will take photos, just let me know.

I washed out the hummingbird feeder and packed that away for Winter. I haven't seen any hummingbirds now for a couple of weeks, so I am guessing they are heading south? The Canada Geese are very active at the moment, so not sure if they are getting ready to head south also? 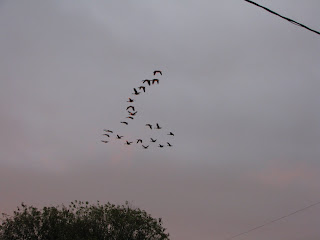 In the afternoon we headed to Orangeville as we had a couple of errands to run and dh wanted to pick up something in Canadian Tire. I wish I had, had my camera with me, it was the funniest/strangest sight we have ever seen, there must have been between 75 and 100 snowblowers lined up in rows of five down this middle aisle in the store. I have never seen as many snowblowers. So of course a manager was passing so I got talking to her about them. She said they were sold out of snowblowers by the middle of September last year and expect to sell all of these within the two weeks.....WOW

An associate of hers was standing next to her and said, "we are in Orangeville and one things for sure, we're guaranteed snow up here." We already have a snowblower, and the neighbour called me the other day to say he would pop over for a visit to discuss how much he was going to charge us to plow us out. Fingers, toes and everything else crossed that we have a mild winter.

When we got back dh put the light fixture up in the family room. As you can see we are going with a "Tiffany type shade theme." 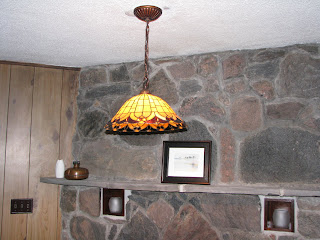 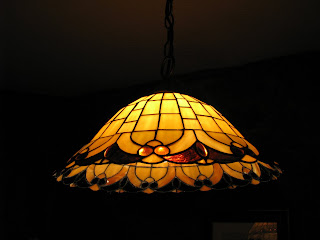 I have matching wall lights as well, but there is an electrical issue with the sockets, so dh needs to look into that.

Finally here is a photo of Molly. She is driving us crazy eating her paws and generally scratching herself, from 2am until 6am. I put her one "human" allergy pills, but she had a bad stomach yesterday, so only gave her the one. I am going to dope her up today in the hopes she sleeps through the night, as both me and dh are getting sleep deprived with her scratching. 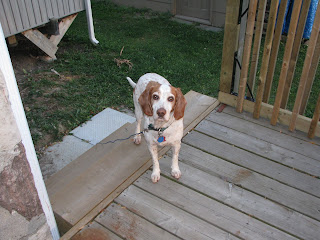 Posted by Gill - That British Woman at Saturday, September 26, 2009

I love you light fixture!

On another note, you may want to look up homeopathic allergy remedies for Molly, one of my mother's German Shepherds has terrible allergies and she only ever gives her homeopathic and natural treatments and they work quite well and shouldn't upset your puppy's tummy.

Beautiful light fitting, Gill. So glad you're enjoying life in the country. I've always been a country gal at heart and love watching the Canadian geese fly over us here in the Pacific NW.

Oh poor Molly, that must be so awful for her!

Snow....I always think I miss the snow, but when you have to get to work I remember how awful it was!

I love your light fixture.

I'm thinking Molly must be allergic to something, whether it's her food or something in the house. Hope you can get her settled down tonight.

Are you using Benadryl for Molly? I had to put Peanut on it too, she is allergic to grass! Sheesh. Works great for her. Benadryl is safe for dogs - just check the dosage online.

We use Benadryl for DearDog. Our vet says it's fine.

Any chance she just has dry skin? She may need more fat in her diet. Dogs don't digest fat the same way humans do. They need it for shiny coats and thermo-regulation.