Sprinkles/Hundreds and Thousands, another quilting store and on a hunt for a family doctor....

So on Tuesday I was looking in my fridge and discovered I had a carton of whipping cream that needed to be used up, so I made a trifle. I have a photo, but as I am writing this on Tuesday, I can't upload photos, AGAIN :0(
(Wednesday morning and it took seconds to upload this photo??) 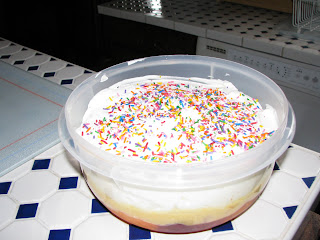 Now the classic way of making a trifle in this house, is sponge cake, then jello, and fruit if I have it, on a special occasion I soak the sponge in sherry. Then custard on top of that, using Bird's custard powder, then whipped cream on top of that. No trifle is complete without sprinkles/hundreds and thousands sprinkled on the top of the whipped cream. However that is the only way I will eat sprinkles. When I go to the donut shop, a donut with sprinkles on would be the last one I would buy, however I always buy them for the kids as they are their favourite donut.

I know in Britain they call them hundred's and thousands, in Canada and probably the States we call them sprinkles. How do you make your trifle?

I had to go into town this morning to Shopper's Drug Mart they had a promo on when you spend $50 you get a $10 certificate to spend later at Shopper's so I stocked up on a couple of things. While in the store I got talking to a lady while I was looking at some of the quilting magazines and she told me about a quilting store, which was just around the corner. It's called Lilac Lane Quilts and is run by a super lady called Liz. She was so helpful and although I didn't have a good look around as I had a headache, I can see me going to that store on a regular basis. Plus Liz is a wealth of information on local things, which is always helpful!!

In the same plaza there were two doctors offices, so I figured I'd call in and see about registering. Went to the first office and managed to talk to a very helpful lady, and she said one lady doctor would be willing to see us in January 2010, but she only worked Monday to Thursday mornings, and Thursday afternoon, her last appointment being 4:45pm. She doesn't have hospital privileges though, and would only take us on if we had no major medical problems. Left there very unsure about all of that, and said I would get back to her. However she also gave me a phone number for the hospital where you can be put on the waiting list.

I then called in at the other office in the plaza and basically all she said was no they weren't taking anyone on. There was a third office on the main street on my way home, so I called in there and she gave me another number to call and register. The number is for Health Care Connect and is 1-800-445-1822. However this is for people who have NO FAMILY DOCTOR at all. You can't be registered with any doctor.

We are still registered with our family doctor in our old city, and don't want to give up that doctor until we get another one in the closest town to us. The only reason we want to change doctors is that it is a 45 minute drive from where we live, and he is constantly running an hour behind, so a visit to the doctor's office is a three hour experience!! Anyhow, I ended up leaving our name and number on the hot line with the local hospital, and when any doctor takes on new patients we will be notified. No idea when that will happen, but at least our names are now on the list.

As with many areas, family doctors are in such short supply in this area.
Posted by Gill - That British Woman at Wednesday, September 30, 2009

They keep telling us that with government-run health care we'd have it better than we do now. Why am I not convinced??

Have not made trifle once since arriving, must do.

Have to say, I absolutely love your countertops though! :) Countertop envy, lol.

In Australia those would be mostly sprinkles too, though I saw a few 100s and 1000s on the trifle, the round bits. I think the others we call dollar fives?

My Nana made my trifles, and Mum too probably. Jelly roll (have nearly forgotten what we call it) sherry, jelly or jello, not jam or jello. Peaches, custard, (jelly port wine flavour?) and chopped walnuts. I think that is it.

I haven't adjusted to the doctors here, I have been going there more lately, and feel a little better about it.

I should be grateful, I forgot it is hard to get into doctors in a new place. I have kept my own doctors, and used them nearly 2 years ago for something in particular. It is 2 1/4 hours away. We still go there for the dentist.

We have 2 doctors in the town closest to us who are no longer taking new patients too. Our health system is in a crisis everywhere. With a move planned next year that is one of our biggest concerns. Hope you can find one who is GOOD!!

Keep your old fam dr. I got left high and dry and in very serious trouble on account of being left without a primary physician when he closed up practise and moved 3 hours away. In retrospect, I should have followed him - I was that critically sick and could not find anyone taking on orphaned patients within a two hour drive.

Our area is the worst in the province. We have half the number of primary physicians that the rest of the province has.

Oh dear that sounds awful not being able to get a doctor near you. Hope you are successful soon.

I think the UK has more problem with dentists. Why? Because lots of them only do private work and don't take NHS patients. Those that do are overloaded.

Now, why am I not convinced private medicine would work better than the good old NHS?

hope you get a doctor soon! we call them sprinkles and your trifle recipe sounds just fine to me!

Gil I think ALL Drs run an hour behind!

I had a female Dr about an hour away that I only went to for my yearlys. I had a male Dr that used to be right across the street from where we lived that I went to for everything else. Well he moved 45 mins away and for several yrs I still went to him.

Now 2 yrs ago I moved and both those Drs are too far - I got a new one right nearby but she does the same as you mentioned, works only 2 days per week.

Don't give up your old Dr if he is easy to get in to see, these new ones are not!