I got a good telling off, #2 carrots and other stuff

Everything I am going to talk about happened on Sunday, however as I had already prepared Monday's post, I had to wait until today to tell you all about it.

First of all who told me off.......this little fella did: 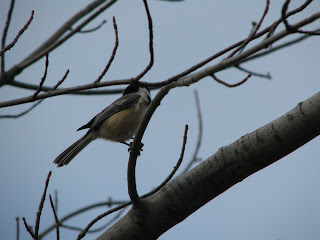 Why, because I decided to fill the bird feeder when he wanted to feed. I mean he wouldn't shut up while I was filling the feeder, and as I said to him, he would get a better meal if he left me alone for a few minutes, as I was filling up the feeder with a variety of seeds; but on and on he went.

On Sunday we had to go to a Funeral Visitation (a Funeral Visitation, in the United States and Canada, a funeral custom where a mourner visits the deceased person's family and views the body lying in the casket, either at a funeral home or church. ) It was for one of dh's friends mother who had just passed away. She was the double of my Nana when she died, quite eerie.

We had to go past Holland Marsh and I saw a couple of signs for #2 Carrots ideal for Deer, Cattle and something else, can't remember what the something else was. So me and dh were discussing the fact that we didn't know what the difference was between a #1 carrot and a #2 carrot. On the way back, I remembered I needed some carrots so we called in at a farmer's market at Holland Marsh, and in there was these huge bags of carrots. Too many for us, so I picked up a 10lb bag for $3.49. Anyhow, I asked the lady what was #2 carrot and she said they were carrots that got broken in the washing machine's and were not good enough for the main grocery stores. I asked how much the bag's in the store were and she said $5, and the bags weighed between 40 to 50lbs each. Bargain or what? However I just couldn't see me and dh ploughing through a 40 lb bag of carrots before becoming utterly and totally sick of carrots. By the way, does anyone know if there are #3 carrots?

Although this is a crappy photo, here is what they look like: 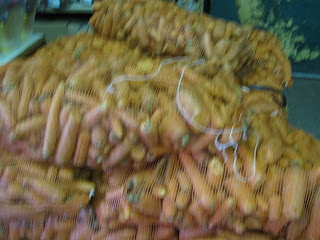 I also took this photo as I couldn't get over how much they were charging for bunches of greenery, and people were buying them!! 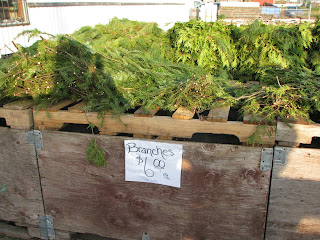 Now I am not a big fan of those fashion magazine, like Vogue or Flaire. Anyhow, dd sent some magazines up to me via ds, and one of them was Vanity Fair, which I would never purchase in a month of Sunday's. That was until now. It was the September '09 edition and boy was it interesting, I read a very interesting but scathing post on Ruth Madoff. They had articles on Farrah Fawcett, and Michael Jackson and lots of other interesting articles. I must remember to ask dd to keep anymore she gets. It turns out the people who lived in the condo before them didn't bother to cancel their magazine subscription and never left a forwarding address. They send all over mail back to sender, but keep the magazines!!!
Posted by Gill - That British Woman at Tuesday, November 24, 2009

Hi, thanks for visiting my blog, I'm sorry it's taken so long to get back to you but a w.i.p. is work in progress.
That would be an awful lot of carrots to eat but I guess it would help you to see in the dark :)
Yvonne x

So, was that 6$ a branch or 6$ for a bunch of branches? If it was for one branch, then yeah, that's highway robbery!!!

I'm not sure if I would like to go to a funeral view thingy.

I haven't bought any Christmassy glossy mags yet but may well do !

you could pressure can the carrots and they would last for forever. that is outrageous for greenery - i cut mine out of the woods and wire it together......
kris

Vanity Fair does have some interesting articles....once in a while I'll find a used copy for sale at the library...

Now what I would really love is a subscription to the UK Country Living!!! although their website is quite good and enjoyable.

Have a great day!
Niki

I also don't go in for all those fashion mags because they are so ridiculously expensive.

Oh yes agree with the carrot and coriander soup, my all time favourite.

Heck I'm glad we don't have those funeral visitation thingies. I remember my grandad took me to see his mother who had died and held me over the coffin. Streuth what was he thinking about! He was a lovely grandad, loved him to bits but I was only five and I can still remember it. I've never looked at a dead body since, it must have done something to me.

I buy big bags of 'horse' carrots too. They taste just fine, feed them to the rabbits and chickens, we eat a lot of veg, cooked and quite a lot raw - grated carrot in most salads, colslaw and whatnot. They freeze ok too - how about carrot jam? They did alsorts with them during the war!

6 dollasr for a piece of greenery? are people insane?

Hmm, do you have a juicer. Carrots are great juiced and you could use tons this way and not really feel *over carroted.*

#3 carrots. hmmm, that fact that I didn't even know that were numbered means that I am not the girl to ask such questions.

Kimmie
mama to 7
one homemade and 6 adopted
*expecting from Ethiopia!