Face to face meeting and some photos......

Now granted I have moved 45 minutes away, but that's no excuse. I have seen my friend face to face in person, only a couple of times since we have moved. She did come up to pick raspberries, but other than me popping in at her work to drop something off, I haven't seen her. Granted we talk when I call, or via the email but that's it.

Technology seems to be taking over from actual getting together face to face meeting. Its so much easier and convenient to go onto Face book, or to email someone, rather than taking the time to arrange a get together. Life seems to be so busy for everyone nowadays, which is silly, as we have all these modern convenineces to save us all time. So in theory we should have more time on our hands, not less? It's such a shame and its a sad state of affairs if you ask me and something we are all guilty of. So maybe we should all try and make an effort to meet our friends face to face once in a while?

The photos below are of the library at Shelburne. The oldest part of the building was built in 1910, the newer part was built in 2004. Such super and helpful staff that work there, and a joy to deal with. I love the stained glass windows they have in there.

(as always click on the photos for more detail) 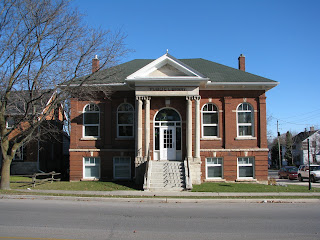 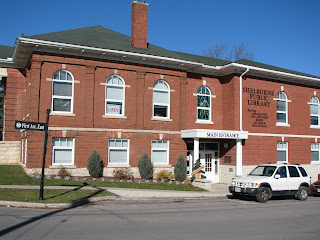 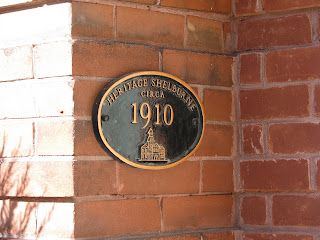 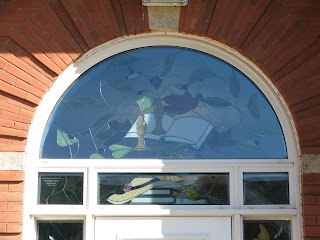 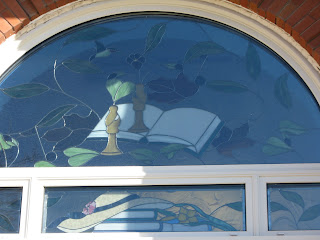 Remember I was talking about the sitemeter the other day and how fascinated I am with it. Well here is a few examples of how people find me:

BRITAIN WIND GALES - I know I'm forever rambling on about the weather but even so.

BRITISH WOMAN PORNO.....icky, icky, icky - funny thing is I am the most straight laced person out there!!!

who took that photo of a woman whose head was covered by british flag - and up pops me???

titled british woman - maybe someone thinks I could be royalty??? I know I'm always on about how fussy I am when it comes to parking my royal butt when using public washrooms/toilets.

british woman creates lightsleeper - I'm not getting this one? Are you?

only mad dogs and Englishmen... - I did do a post with that title here but somehow or other, I don't think they were looking for that?

heavenly hollyhock fabric - can't believe someone was searching for that, I have a couple of metres of it, but it's not for sale!!

Then of course, a lot of people find me searching for recipes, due to the recipe posts. Thinking about doing something like that again, obviously not with veggies or fruits though.

Ha ha! Amazing what folk search for isn't it?!
That building is lovely, As for friends, I don't think many people have 'real' friends anymore! Most are in www land....XXX

I'm afraid its all to easy to email or text nowadays - I'm as guilty as anyone!
Hope your not getting as blown away up there as us - this British weather - Bracing or What! and Jolly Wet!!

I wish i had time to get togetehr with my friends more often. no excuse but with full time work and caring for my family, running my boys to their stuff, it is hard to squeeze out time. also my volunteer stuff takes up some time too. I miss the interaction

Amen to that thought.
My bff and i have ti meet 2 to 3 times per year she lives in Chicago and me in Florida.
Email and phone does not place of a good heart to heart up close.
sue.M

Gil, I too use Sitemeter. How do you find what people are searching for? I don't see that anywhere?

Amazing what people search for.

I love that library building...wow!! And I totally agree with you about meeting face to face with friends. So sad when e-mail and facebook take over getting together with friends. I'm guilty too!! Hugs

Now that I am retired I find that I have more time to meet with friends. In the winter I go to the theatre, dinner and a play, once a month with two friends. Meet with others on a faily regular basis. I still write "snail mail" letters to two school friends in England, have been doing it since 1954!!!. I must be more old fashioned than I thought I was. The library building is lovely. Patricia

Thanks for commenting on my blog, and I'm here to set some things strait for you.

Yes, Georgia pudding is served on the plate with the turkey dinner. It's also wonderful with ham too.

As for the Jello salads and such, they are a bit more versatile. They can be served with dinner as a side dish, or as a light desert afterward. For Thanksgiving, I have little dishes just for fruit or jello salad. I usually take a bite of them through out the meal. :)

On a completely separate note, I have a site meter too. I found you from a comment section, I think.

Funny how we reach places on the Internet. One simple search can lead you into a totally different direction. I'm fortunate to have a group of friends who aren't really interested in the computer, apart from checking their e-mails, and some not even that. We get together face-to-face on a regular basis and we have a blast. I don't really enjoy Facebook and only got on there because my son started up on it, so whenever he says, "Check Facebook Mom, I've put a few photos up." that's when I visit that site.

The brickwork and pointing behind the sign 1910 is very bad! I was quite shocked when I saw it. The public library is gorgeous. Who wouldn't want to go in there.
How interesting how people find you. The connections can be quite obscure but there you are, found!
Blessings, Star

The library is truly an amazing looking building. What a tranquil place for a bookworm!

I am still giggling over some of those searches you appeared in, Gill. That's just too funny, you wild woman, you!

This made be laugh. You wouldn't believe the searches that show up on mine.

Just dropped by your blog (via Skywatch for the record!) - love the recipes, we'll have to try some next gardening season.