Faster than a speeding bullet!!!

That's what our Internet is like now. We got hooked up to a local company Zing Networks on Wednesday. So now we don't have to deal with the dratted Bell 3G stick anymore!!

It's working a charm, and it's so nice that both me and dh can use our computers at the same time. I have just uploaded a photo and it's after 6pm. That would have been impossible to do with the Bell stick.

The photo I uploaded was of another Dove in the Window block I made on Wednesday afternoon. 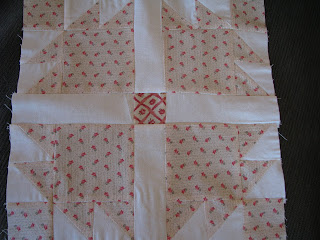 Have you ever had a day when you are sewing and you spend most of the time just pulling out the stitches as you are not happy with it? Well that's what happened with me on Wednesday. Still I continued on with it, and I managed to get it finished. It's in pink and cream. I think I will do the sashing's in two shades of green, not sure yet.

On Tuesday when I went shopping I called in at Hallmark Cards, as I wanted to pick up this years Son and Daughter Christmas ornaments. I have bought one each for the kids each year for a number of years now. Anyhow I searched high and low on the stand, but couldn't see the Son and Daughter ornaments. Didn't see a Mother or Father one either, did see grandson and granddaughter ones, expecting mother ones, but no Son or Daughter ones.

So I asked an assistant, who in turn couldn't find them, so she asked someone else, and that assistant said they have stopped making them. However they have brought out a Christmas ornament hanger with "Son" and "Daughter" on it, that you can use with one of their ornaments.

I thought that sucked, and it turns out I am not the only one disappointed with their decision not to continue making these ones. I think I will be emailing Hallmark to tell them I am not happy. Meanwhile I will have to go to Carlton Cards and buy one from there for the kids.

Also I forgot to mention yesterday, there was a pet store in the mall, and as I was walking by I saw the cute puppies in the window. So of course I stopped and had a peek. There must have been around a dozen puppies there, including an English Bulldog puppy which was going for $4,500, yes that's right FOUR THOUSAND FIVE HUNDRED DOLLARS. I double checked as I couldn't believe it. The "cheapest" dog was a little Yorkie and that was $1,300. I couldn't get over the prices of them, and when I asked an assistant if they sell a lot of puppies she said yes, unbelievable!!

Poor Molly wasn't well on Wednesday, she had a bad tummy and she vomited, not sure what's wrong with her. Will have to keep an eye on her.
Posted by Gill - That British Woman at Thursday, November 12, 2009

On Molly, any chance that you could call a vet school at whatever university has a vet school in your region? That's what we do for the really bad stuff down here. Many times they have research programs going and you can get excellent care and meds for much less than the regular vet. All the latest stuff. You might turn up just the help you need.

As for the net, glad to hear you have speedy service now. Be careful not to shoot yourself!

Hello Gill
They do say - good things come to those who wait - I'm sure the wait for a good internet connection was worth it.
What a shame about the tree ornaments, its nice to know you can get them elsewhere
Take care
Cathy

wow that price is almost the same as a used car! sorry about the ornaments, the kids will understand.

Poor Molly :o( As for puppies, I would never, ever, buy one from a pet store, kittens either. They may sell them for a lot, but most of them come from puppy and kitten mills where the parents are over bred and their genetic background is not looked into. That's how you end up with dogs like poor Molly who have terrible allergies, or heart conditions (like our first puppy), or hip problems. The best place to get pets are breeders or, if you can't afford that, from rescue networks.

Thats an obscene amout of money for a dog - and I bet there are loads of homeless dogs in the pound or re-housing shelter or whatever you call it. People have more money than sense!
Parceled your paper up, will post it tomorrow.

I sure do hope Miss Molly starts feeling better soon. It's so hard to see our little fur babies sick.

Emailing Hallmark is a good idea, I think. It's important we let the manufacturing corporations know when they discontinue a good thing!

Hi Gill,
We have our dog on Vanectyl P. year round. Sometimes she is on 3 pills a day and other times..like in the winter she is on 1 pill. It so far has been the cheapest thing for us to do. She is on a special diet that has made a huge difference but she HAS to have the pills. They are hard on her but the chewing is worse. It is the best it gets. Pets cost so much these days it makes you wonder how much a family can afford anymore. Not blaming the Vets..they have to make a living as well.
Good luck..Judi B.

I wish more people would pick up a puppy from the local rescue places. Over a thousand dollars for a dog? Tragic.

Gill,
The Dove in the window block is just so pretty.

Gill I'm wondering if that's why she is chewing her paws so much. Is something else going on? As to the pet store...many of those stores sell puppies from puppy mills. At the price they were asking, I'd be surprised if anyone bought it. Hopefully they get their puppies from a reputable person.

Your block turned out great. My best friend is my seam ripper. I use it constantly!!

Nice to hear you have fast internet.

Truly dogs are one of God's gifts to us, but we seldom factor in all the extras that will be coming. I have never had a dog that did not come with extras. I like your quilt, but even better I like your camera. When I click to enlarge your photos, they are so crisp and give up so much detail, much better than so many on-line pictures. What kind of camera do you have? I have none, so I may as well discover what is good and what I would want:)

What lovely handwork you do. The colours and patterns are so appealing.

Agreed that the price of puppies in pet stores are incredible. A friend of mine fosters dogs. There are so many animals looking for good loving homes. Molly was lucky to find you. We have a big black tom cat, Nemo, who found us three years ago. He was a stray that decided to stay. We are glad that he did : )