So I made a trip to the "big" city on Tuesday, as I had some errands to run. One place I went was to Mississauga, so I figured as I had to sort of pass by the area, I may as well call in at the Lindt Chocolate outlet store, as I needed to get some chocolate deocrations for the Christmas tree.

I picked up these boxes of chocolates, to give as gifts, or to eat ourselves, not sure yet!! 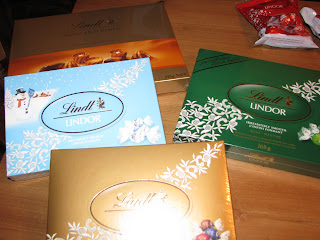 Hear are the chocolate decorations.... 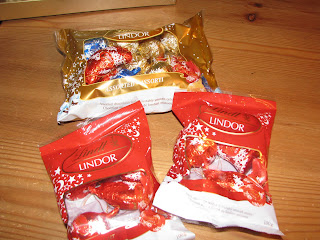 Now all their Halloween candy was on sale, so I picked up a couple bags of them, they were only $2.60 per bag, and of course I had to taste them just to make sure they were alright, as I wouldn't want any harm to come to anyone. 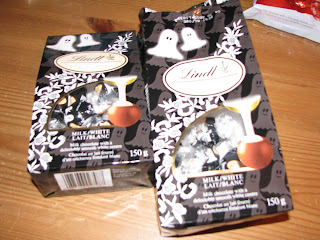 You'll be pleased to know that after sampling a few of the Halloween candies, they are fine, but I do feel I should try a few more, just to make sure!!! By the way all that lot cost me under $45, which is a great deal.

It was super foggy on Tuesday and it made for hard driving.  I do admit to being one of those drivers who barely stick to the speed limits; however on Tuesday I stuck to, and or drove under the speed limit, as you could barely see in front of yourself.

A bit of a funny story also.  I was sitting on the toilet minding my own business on Tuesday morning when the house started to vibrate/shake.  I am thinking what the heck, or words to that effect.  It turns out they were working on the shoulders on the road, and they had the big rollers pounding it down.  That was all very interesting, as it was something I wasn't expecting!!
Posted by Gill - That British Woman at Wednesday, November 25, 2009

I remember when they repaved the road in front of our house. They had one of those pounding rollers, so I can imagine what you were thinking there on the toilet. LOL

my son would be in chocolate heaven - a whole shop of Lindt !

I bought piles of goodies earlier to fill the advent calender. Might need to nibble a tester !

How very strange for you on the loo !

Darn - I thought we were going to read an earthquake story!

I'll test them for you. pop them in the post, there's a love.

I love chocolate from Lindt. Of course you had to test the Halloween candy. I would have too.
Did you have an earthshaking experience then?

So, did the earth move for you hehe?

Gill, I've never heard of putting chocolate on a tree. What if a piece got too close to a light and started melting! Nope, you better eat it and save the mess. I sure would.

Wow good thing I don't close to that store. Taste some for me too!

I'm like that when I go into Thorntons. Their bargain chocolates are brill. I always buy their top of the range Easter eggs after the event. Mmmmmmm!

Your toilet story reminded me of the time we were in Barcelona and my husband was on the loo. He came running out asking why the building was shaking. I was wondering why the rocking chair I was quietly sitting in had started to rock of its own accord. It was an earthquake! Yes in Barcelona. At least you were spared that problem.

Gill,
This is why I love your posts.
They really do make me laugh.
I thought it may have been a plumbing problem you were going to post about.
Chocolate my favorite treat.

yummmm i cant believe the have a whole store of it.
Sue

LOL thanks for that bit of humor! And yes, taste testing chocolate is most important, I mean wouldn't it be awful if one of your holidays guests suffered any unfortunate consequences if you didn't? Ah, the sacrifices we make.

In Australia it is getting a bit tricky to buy chocolate now because of the weather. I have some in the house though.

I always follow your blog...and your mice woes! I just wanted to mention that chocolate on the tree will probably yield in an increase in mouse activity...

Too funny about the house. We live close to a train track so have the same thing happen often. When in the bathtub we always say we don't need a whirlpool tub, we have our very own when the train goes by. Hugs..

Ooh! Lindt chocolates, my absolute favourite. We always had chocolates on the tree when we were kids, and special European candies (and no LizBeth, they don't melt from the lights, but then we never hung them too close to them).

My sister and I used to sneak the candies and chocolates from the less prominent parts of the tree, loosening the wrapping only enough to get the chocolate out, then reforming the foil to make it look like it was still intact. Oh my! I haven't thought of that in years LOL. Thanks for the memory.