I don't know about you but I am filling the bird feeders on a more regular basis, nearly every other day. On Friday I tried to take some photos of the birdies. Normally we have Blue Jay's feeding at the feeders, but there were none on Friday for a change.

I saw a Downy Woodpecker at the feeder for the first time, they are cute little things. 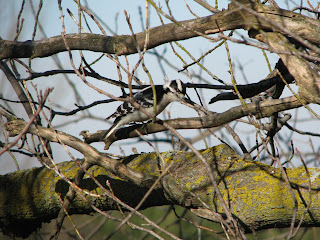 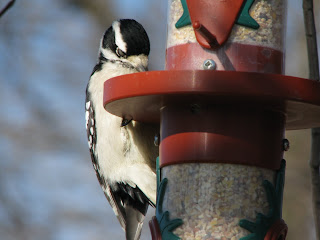 I was able to identify that bird, but I am not sure what the following two birds are? 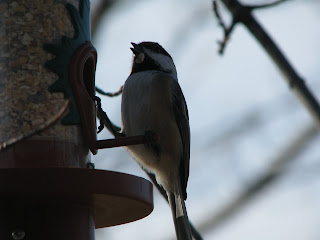 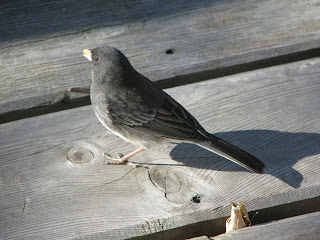 So what else have I been up too. I have an ear infection AGAIN. I have been sniffling for a few days, but its my ears which are driving me crazy. I feel as though the Atlantic ocean is swishing around in there!!! I have a nasal spray which I am using to clear out my nasal passages, and according to the Internet I could take an antihistamine, as my sinuses look full as well.

We, or should I say dh has got the back of the knee wall insulated. What a horrible job that was. Poor dh was drenched through with sweat within an hour of being behind there. On a more positive side we should have the insulation finished by next weekend, fingers crossed. We have been blessed with lovely weather, during the past couple of weeks, so that has helped a lot. However we don't seem to be able to get past 15 oC upstairs on a night? Is that normal for an older home?

Also on Thursday night I was finally able to get my car parked in the garage. Partly thanks to my dad cleaning the garage out, so thanks dad for that. We still have "stuff" to move but its a lot cleaner than it was. Oh and when we bought the insulation for the attic, we had a miscalculation and it looks as though we may have around a dozen packages to many. No problem though, as we can use it in the new extension basement when we start on that. So we are ahead of the game I guess there.

Oh, and finally, if you want to "see" where we live, check out this link

Couldn't resist this photo of Molly, lying there in her basket with her head on her ball. 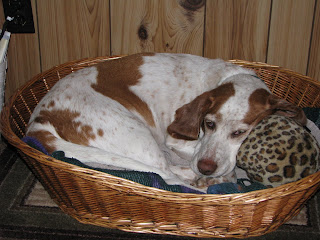 I clicked on the link to see where you are - another reason to come to Canada!!!!! It looks so lovely!

It's lovely to see pictures of strange birds, unlike any that we see here.

You always have such lovely pictures. . . . . . Hope Molly is feeling better, or is she just blasted on medication? Either way, she looks comfy.

What lovely pictures of birds, every time I try to get some they fly away, I had a brilliant shot of a Wood pecker all set to go and he flew off as I pressed the button!!

Regarding your comment on my blog, chickens will ALWAYS come home to their house at dusk. They can't see very well in the dark so like to be in familiar surrounding before dark falls. You just keep them confined to their house for the first week and then they see it as home. It helps if straight after you let them out you always keep their feeders near the house and feed them first thing in the morning and then early evening. It cuts short their wandering time if they have to come home for tea.

I would highly recommend you getting some they are as friendly as cats and dogs, so you can have lots of fun and you get eggs into the bargain!

Hi Gill! LOVE your pictures of the birds, and I'm enjoying your blog too!! The 2 birds in question, are a Chickadee (at the feeder) and the 2nd is a "Dark Eyed Junco" or a Snowbird. Both are winter birds that we see a lot of in Virginia as well. I love feeding them too and seeing all the different varities that come to the feeders. But I haven't set them up for winter yet--I'm still in denial that the colder weather is actually here! Hope Molly is feeling better--She's sucha cutie! ~Kim~

What wonderful photo,s.. my favourite has to be Molly though.. Having a Molly myself and a Bertie too, i realise that balls and teddies are the most important things to them.. oh and walkies too xx

Thanks for your visiting on my blog.

We can't seem to keep the bird feeders filled here at the Farmstead ~ seems the squirrels and coons want to partake in the treats, too. Heehee!

Sheesh ~ I sure hope Miss Molly and you both start feeling better soon. Ear aches and itchin' are just no fun!

You have some great bird photos! I don't know about the first of your two mystery birds, I was going to say he's was a Chickadee, but he looks a bit big for that. I know for sure that the second one, the little gray guy, is a Junko. They hardly ever get on feeders and eat off the ground. I sorry about your ear and sinus infections, I hope you feel better soon! Oh, and that photo of Molly is indeed very cute :o)

Love the picture of Molly. She looks so content in that picture.

Our upstairs doesn't get much warmer than 15 C either. It's all insulated too. We find that quite comfortable. Hugs..

The first bird definitely looks like a chickadee. My dad used to say that there was a similar bird in England called a Tit. ( He may have been pulling my leg though).
We have driven often through your neck of the woods. Yes....it is a very beautiful part of the country.

Thanks for the comment! Coincidently I popped over here from Canadian Saver's yesterday but didn't get a chance to comment!
I love all your pictures, looks like an amazing fall day! Here in AB we don't quite get that nice of colours on the trees.... :(

love th4e pics! sorry about the earache. love your village!

Pretty, pretty birds, and such good photo's of them.
Sorry to hear you have 'swishy' ears! Take it easy - get some resat!

thanks for all your comments. PaulaBRett I can't access any of your blogs? Sorry.

Lovely pic's Gill. My Darling Husband put a little feeder right outside my window where the computer is. I love to see the little visitors each day and the kids love it too!
Blessings, GG

Lovely photos, I really like the woodpecker shots. Do you have any hummingbird photos?