I used to do it all the time, but have not done it in ages. So I decided to make a list of meals for the next week or so and see if I can stick to it!! I find it saves time and money if I have a plan, as I know ahead of time what I am going to make, so no last minute rushing around.

Here is my menu plan:

As I said my main downfall will be trying to stick to this.

I also went to the quilting store on Thursday as I needed some material, and help on this block I am doing. Both A.J. and Jacky are great people and Jacky comes from Britain. Jacky is one of these people who does things in her head, she doesn't need a pattern. Whereas I need a pattern and follow instructions to the letter!!! Suffice to say after talking with Jacky, I am not following the pattern they gave me to the letter, as Jacky said so!!!! I wasn't supposed to say that, as she told me not to write that on my blog, "as Jacky said so!!"

Anyhow here are some more photos from the store. I swear you could spend hours in there and still not see everything!! One of these days I am going to go in there and have a really good browse around, hopefully I'll also have a pocket full of money as well at the same time. 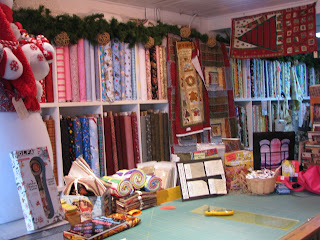 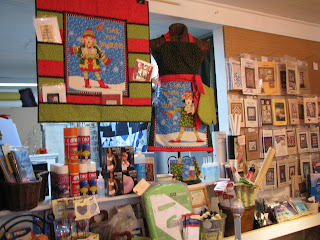 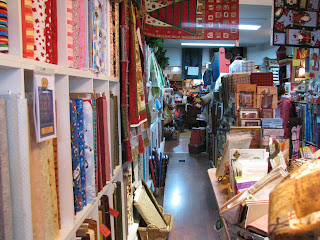 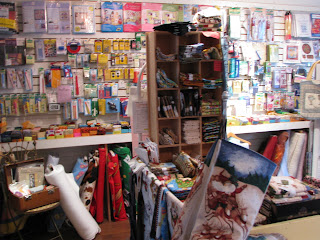 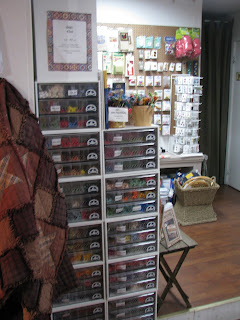 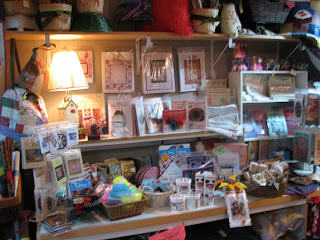 I got the material what I wanted and even booked a class for December, which was bad of me, as money is very, very tight at the moment, but it was only $15, and I don't think the supplies will be much, as we are using scraps of material that we have around the house. I want to make this something as a Christmas gift, so I can't mention what it is on my blog!!
Posted by Gill - That British Woman at Friday, November 20, 2009

I want to but have never been able to menu plan on account of too many cooks here freelancing.

Husband and I always make a menu list and manage to stick to it when shopping. There was an article in the news a while back that said the average British household throws one third of their food away - absolutely amazing statistics. I think the only thing we throw away are the crust ends of bread. It really helps if when shopping to stick to the list! By the way - we are eating liver tonight as well!

ooo the photo's of the quilting store look great! There was a shop like that in Norfolk when we went on holiday last year, I was like a child in s toy shop!
menu planning - details on blog somewhere!
sunday - roast chicken
monday - chicken casserole
tuesday - shepherds pie
wedneday - use up rest of mince for spag bol
thursday - sausage casserole
friday - fish pie
saturday - veg curry (use rest of veg for sunday dinner)

Yum, I am coming over too!
Love the pics of the shop, it was almost like a virtual outing - thanks ;-)

I've been doing meal planning for quite a few months now and find it has helped with both waste and general 'spend'. Put the following weeks menu up on my blog every Friday which I find, for whatever reason, helps to keep me in line.

Mmmm...beef stew! About time I did that again, love it in the slow cooker!

I used to do that...plan the menus and all...I see two things I'd leave off at once...liver and liver...
Love the quilting shop...I'd be in there forever, asking for a job, anything to play in material, laces and threads...buttons and bows...
Sandi

Oooh what a great quilting store. I wouldn't be able to take my pocketbook or debit card in there...I'd be broke in no time. Can't wait to see what you'll be making. And using scraps, that's the best way to quilt. Hugs..

Gill, I really, really like that little quilted Christmas card holder ~ what a brilliant and creative idea! Wow. I would have never thought of something like that. Quilters are an amazing breed. Heehee!

Since you're on the topic of menu planning, here's something I've set up for myself: http://farmnsanity.com/wordpress/?p=391

It works really well for our family. I do substitute meals here and there when there is something new we'd like to try ~ but with 35 meals and that are tried and true keepers, we seem to get pretty good variety.

Take a peek and let me know what you think!

I love that store. When I used to have lots ot time & my kids were small, that was my favourite type of store.

I wish I had the stamina to plan a weeks menu ahead but mine would have to be vegetarian.

Great fixings, and the quilt store sounds very nice. I have never been a sewer or quilter, but admire greatly those beautiful quilts I see. I bought one a few years back which is still on the bed in our guest room, which I have decorated in an Amish theme. I was a painter and painted a couple of Amish children that were tin candle holders, and put them each side of a beautiful Amish scene, one of my favorite wall print I had bought. I guess I was a painter and not a sewer :) Have a great weekend.

I wish we had quilt stores like that around here. We have one small one that has prices through the roof! I am amazed they sell anything.

I can't do the menu plan thing - as soon as I plan something, something happens to change it and the whole week is off - I do one day at a time :)

How was your Pork?
That shop looks just heavenly, I think I would just spend too much, if I was let loose in there!

Hmm...I never menu plan really. I just get two pieces of meat and two pieces of fish a week, plus veggies and one frozen pizza (Ristorante, so it's healthy, like spinach pizza, or mushroom or mozzarella) and I fill in the rest with pasta so I can have leftovers for lunches.

i love liver, will have to buy some sometime soon

Menu plans help, even if you go astray a day or two. I changed tonight's supper on a whim, but I have stuck with the rest of the week, so that's pretty good!

The quilting store looks amazing! I have spent more time in various craft stores lately - it is very dangerous!

I think I'd best not show my husband your menu, he might start to think he's missing out!

i have been menu planning for the last several months and it has made the biggest difference. This Thanksgiving will be so much easier. Thank you so much!