Dh was off on Saturday. So he worked in the attic putting more insulation in there in the morning, while I talked on the phone, and then went grocery shopping and to the library.....I know, what a help I am to dh!!!

After lunch we then went to Barrie as I had to go to the dreaded Wal-Mart!! I called into Michael's as well and managed not to purchase anything.......well done me. Then on the front of the Mark's Work Wearhouse flyer this week, there was a $10 off coupon, when you spend $10 or more.........so we got dh a new travel mug, and instead of paying $13 + taxes, I paid under $4 incl taxes, go to love that!!

On the on ramp to the highway I took this photo of the Canadian Flag, thought it was neat with the sun behind it: 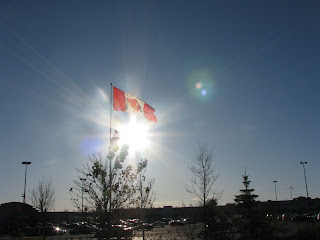 We pass Georgian Downs race track and slots on the way to and from Barrie, never been in it before, not a gambler. 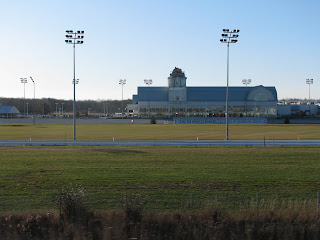 We passed through Cookstown and I took this photo from the car of a decorated Christmas tree: 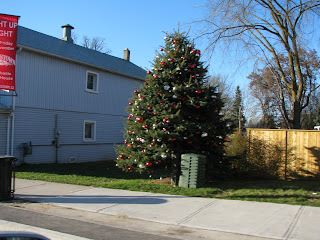 I have yet to stop in Cookstown and look at the stores. It apparently has a really good quilting store there......maybe that's why I haven't stopped, as I need more material like a hole in the head!!

This farmhouse is on the outskirts of Alliston and I just love it. Maybe ours will look as good one day? 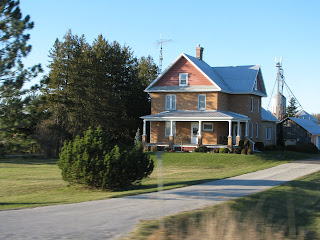 We pass this house on the way too and from Alliston. Yes you are seeing right, the place is full of hearses!! There was a pink one, a purple one, and now there is the old fashioned ambulance sitting there, which dh loves and wants.......over my dead body!!! 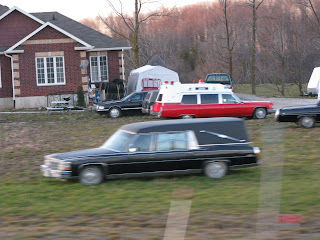 I feel so sorry for the next door neighbours as they are trying to sell their house, and it has been up for sale for as long as we have lived here!!! Who on earth would want to live next door to that?

The sun was just gorgeous on Saturday and was like a big fireball in the sky. Here are a couple of photos, as with all the photos, they were taken from the van: 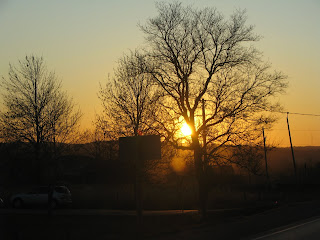 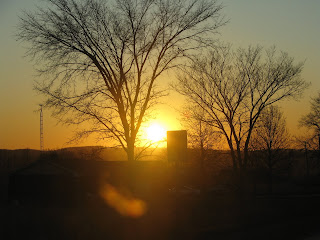 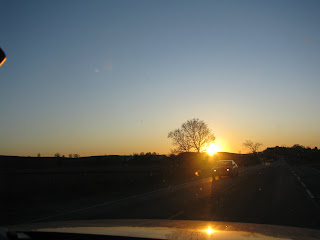 Email ThisBlogThis!Share to TwitterShare to FacebookShare to Pinterest
Labels: Barrie, grocery shopping, mall, out and about, photos

Well, I'm kind of with your DH, the ambulance would be cool. But really, I'd rather a purple hearse.

What a beautiful farmhouse!

You certainly capture the sun at the right moments. The flag shot is particularly arresting.

living next door to some one who collects hearse's what could be better !
well at least we know where you are moving to next then - i mean it looks like the ideal property with excellent views
nick...

It all looks so lovely!! and so Canadian!!

The sunset photos are lovely along with the old farmhouse. The hearse's....not so much. Thanks for stopping by my page!
Have a wonderful day.

Yesterday was a beautiful day. I missed the sunset because I was cleaning up a garden. How stupid was that!

EW! You are so right about that house with all the hearses outside.

Thank you Gill! I shopped at Marks on Saturday and forgot my card, I will stop by there today and get a credit for it!

...and i wouldn't live next door to the Hearses!

have the same card, wonder if it has expired or did I throw it out. i don't have time to shop beyond the essentials so haven't made much inroads of christmas shopping.

Actually, the ambulance would be really cool ~ it would make a fabulous Grocery Getter...and in times of a great to-die-for sale, you could turn on the sirens so you could get there faster!

I'm with you on the hearses - fascinating from afar!

Lovely photos, all around. But I can see what that house would be hard to sell, talk about creepy neighbors!!!

I love love love the picture with the Canadian flag!
I also managed to go to Michael's yesterday and spend absolutely nothing, very hard for me to do! The line ups were crazy.

What wonderful pictures. Glad you got out and about. Hugs..

Loved seeing the pictures. I used to live near there before moving to Winnipeg and always admired that farmhouse. Thanks for the memories.