Busy day on Saturday and a Happy Valentine's Day....

We're not big on Valentine's Day in this house.  I will give dh a card but that's about it, and he will probably give me the same.  He has to work today, but will hopefully be home by mid-afternoon.

We had a busy day on Saturday.  Dh worked on putting the baseboard up in the closet.  Bit more complicated than normal as he had to join pieces and deal with other issues.

I did my usual morning chores, of doing the ironing, cleaning out the fire, bringing in the logs, picking up the poop and feeding the birdies.  Below are a couple of photos of Northern Cardinals.  The first one is a male and female pair. 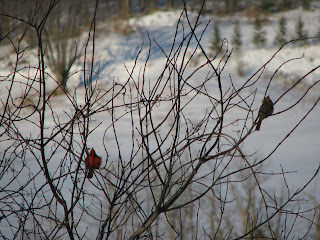 Below is the male Northern Cardinal. 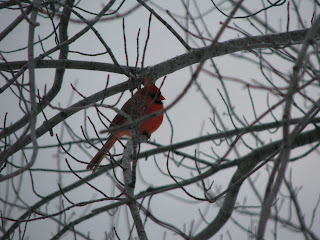 I had ordered the closet organizer through the week, so we had to pick that up.  We also wanted to go to Lowes to check out a couple of things.  Glad we did as we were able to pick up some cordless Levolor  cellular shades like these that they custom cut to our sizes for only $58 a window.  There was also 15% off them as well.  I also got three spray cans of paint that covers rust, regularly $9 a can for just over $2 a can, in Hunter Green.  Not 100% sure what I will use that for, but I have a couple of projects in mind.  At that price you can't go wrong.

Got back home and dh did a little bit more in the closet, still a ways to go though.

Molly meanwhile was lying on the newly upholstered ottoman.  She looks depressed doesn't she....................though maybe not, it's her usual expression...LOL 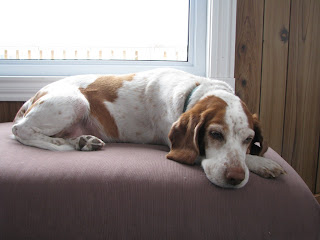 When I was talking with Karine's mother on Friday, she though Molly may be a Beagle/Spaniel mix and I think she may be right, what do you think?
We are half way through the month, did you remember to put your money in your Daily Saving Pot today?
Today's Money Saving Tip:

When in a store, always check out the clearance section, as you never know what you may find!!!  Also I am finding our hardware stores are carrying more and more blinds that they can custom cut to fit your windows at much cheaper prices than custom ordered blinds.  It's worth checking them out!!!  Make sure you get an employee that can use the cutting machines properly though, as it easy for them to make a mess of the cutting. We originally bought blinds from Home Depot, and they made a mess of the blinds, she didn't make a straight cut and they were crooked, and we had to return them!!!
Posted by Gill - That British Woman at Sunday, February 14, 2010

Lovely head photo for your blog. Molly definitly looks pure beagle to me!

Lovely pictures of the birds and I love your header photo Gill. Molly does look a bit fed up but comfortable on her new seat. Ax

Hi Gill..love the new pictures. Molly sure looks comfy..lol. Horses are a huge part of our lives. Even on the most stressed day I find the horses will change your outlook. The little ones are just a riot. We are having a ball with them.
Kally is now 5yrs and a Choc. Lab. We paid a lot of money for her..and have had nothing but trouble with her health. She has been on V/P since she was a year old. We know her life will not be long but other putting her to sleep there is no other option..and I am not ready to do that. She also has both back hips out of the socket..grrr. We got her for breeding and when we found that out had to change that and have her fixed. Needless to say that between the allergy problem and the hips I would never have done that to her or to people buying pups. She is showing more and more problems with her back end so one day we will have to face the issue. We love her so much it is going to be hard..never mind the ongoing allergy issue. Price we pay for having pets I guess. My horses have never cost me what this dog has..lol. Geesh
Anyway good luck with Molly and will chat again..Judi B.

Love the picture of your Molly. She looks so peaceful.

In answer to your question on my blog...yes it is his son!! He also directed a couple of Beverly Lewis's movies and other inspirational ones. Hugs