It was a million degrees outside, okay a bit of an exaggeration, but honestly looking at my face you would have thought it was that hot. So I decided to hibernate in the house with the a/c on, and cook :p

I took out a piece of pork and popped that in the crockpot with an onion chopped, a can of cola, a can of mushroom soup, some chopped up garlic and a couple tablespoons of soy sauce. 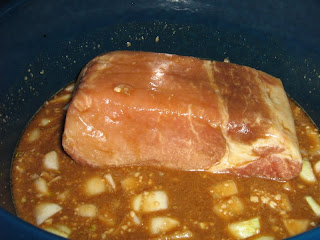 Popped it on low for 8 hours, however an hour before it was done, I took a couple of heaped teaspoons of corn starch/corn flour and mixed it with cold water and popped that into the crockpot to thicken up the gravy. 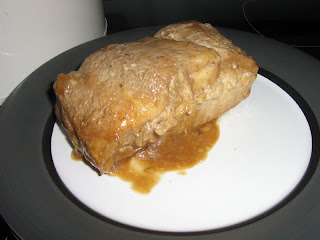 We have a restaurant over here called Swiss Chalet, and they make a dish called Messy Chicken Sandwich, so we had the same but called it Messy Pork Sandwich. All it is, is two slices of bread, put the sliced pork in between the bread. Cover with lots of the gravy, its yummy. Sorry forgot to take a photo, too busy eating!!!!!

So while that was cooking, I decided to make some lemon curd. I had seen the recipe over at Our Red House Kate had originally got the recipe from this blog: Cross Roads It looked such a simple recipe so I figured I'd give it a try.

Place all the ingredients in a pan, bring to a boil and boil for five minutes. NOW, YOU MUST WHISK THIS THE WHOLE TIME, OTHERWISE YOU WILL END UP WITH LEMON SCRAMBLED EGGS!!!!!
Despite me whisking this the whole time I still ended up with bits of cooked egg whites...icky...so I sieved my lemon curd, and I have to say it is yummy, tart but yummy. 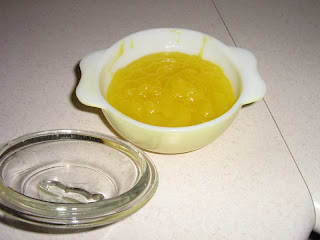 When I was grocery shopping yesterday I was in the produce section, with my trusty homemade produce bags!!!! I saw the produce manager and asked him to reduce some apples and pears for me to make sauce with. He gave me two containers of pears and one of apples. I popped the apples in the fridge for another recipe as he gave me 17 pears for a total of $1.98. 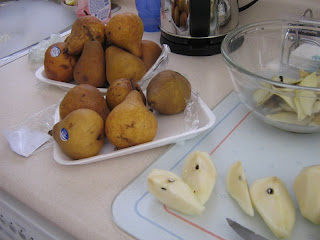 So I peeled and sliced the pears, popped a handful of raspberries in the pan with the pears and boiled them on top of the stove for ten minutes until nice and soft. I did add a splash of water to it. When cooked I popped them into the blender and pureed them down to make pear and raspberry sauce. 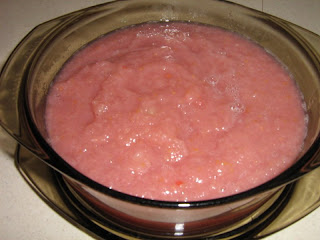 Dh takes a Tupperware container of the sauce everyday. Its one way of getting him to eat his fruit, and I know there are no additives or preservatives in this mix. Plus you're using something that would normally get thrown out.

That sauce looks really good! Thanks for stopping by my blog earlier this week. You had asked about my Rhubarb Pie recipe and if it was possible to make it with peaches. I don't know if that would work, since what makes that pie really sing is the tart of the rhubarb contrasting with the sweet cheesecake taste. Peaches are so sweet it may not be the same sensation.

I have to say though--my niece said she made the butter crust and put apples in it and thought it was amazing. So let me know if you try it!

thanks for getting back to me and thank you for posting on my blog!!