Now I have to say I am not a big fan of cruises or ship's, or basically anything to do with boats, but what I am about to talk about fascinated me, and if you are ever in the area, is well worth a visit.

The Welland canal is a link between Lake Ontario and Lake Erie. The ships are lifted 326 feet by 7 locks within 7 miles. We went to the Lock 3 Observation area and were fortunate enough to witness two ships coming in and out of the lock.

When we got there the ship Irma was already in the lock and was heading for Lake Erie. 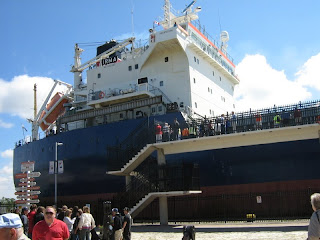 Just after we got there Irma started to leave the lock. 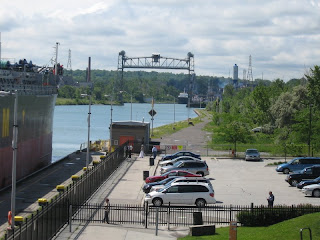 Another photo of Irma leaving the lock. 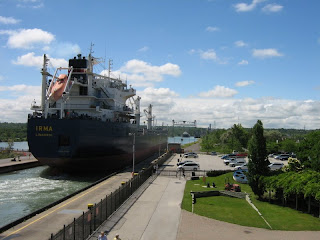 As Irma was leaving the lock we saw another ship heading towards us getting ready to enter the lock, the Quebecois.

Here is a photo of the Quebecois heading into the lock. 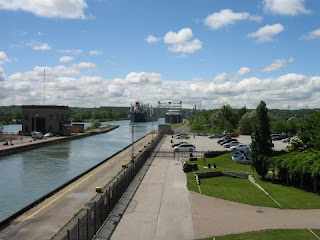 In the background you could see the bridge that was a vertical lift bridge right at the top. 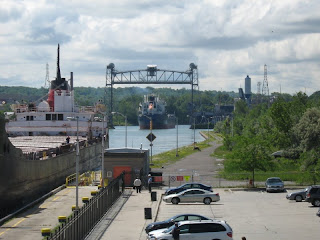 Then in the middle. 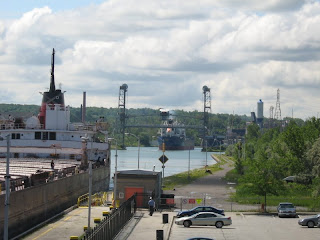 Then back down again. I pity help anyone having to wait for that bridge to be lowered as it was up for at least half an hour, so you either would have to turn around and go another way or wait until it was lowered. 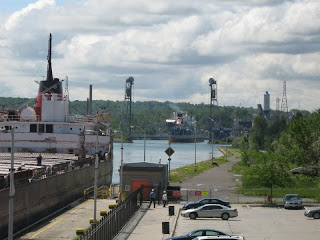 Now as luck would have it, I got talking to one of the wives of the crew on the Quebecois, who was picking her husband up for the afternoon, they lived close by. The crew were mainly from Newfoundland and were going to Hamilton with a load of iron ore. The ship was based is Wisconsin and generally travelled from there to Hamilton. She was a really nice lady. The crew worked four hours on, and eight off. Looked like a pretty boring job if you ask me, and she agreed!! Anyhow we got fed up of being on the observation tower, as you could only see so much and snuck around the side to get a better view of the lock doors. 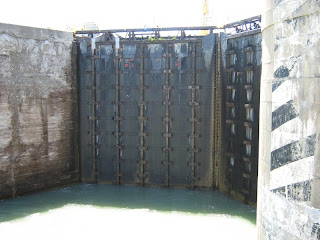 Then the lock gates started to open. 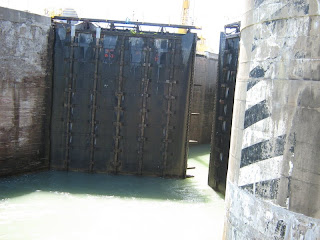 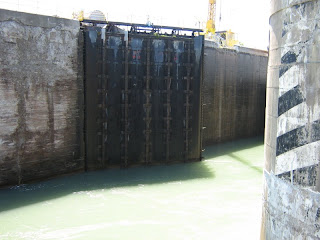 The Quebecois leaving the lock. 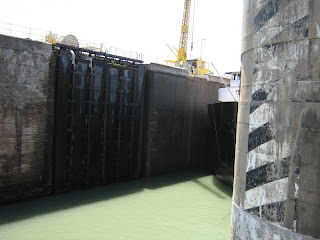 Quebecois out of the lock. 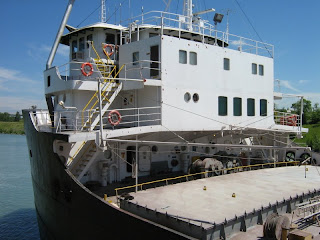 Heading towards Lake Ontario with the QEW bridge in the background. 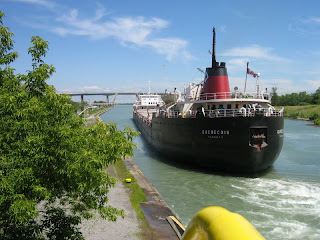 We spent a good hour there just watching these ships come in and out. I got burnt to a crisp as I wasn't wearing sunscreen and was too engrossed in what was going on. There is so much more to do in the area, including visiting Port Colborne, Welland, Thorold, and St.Catharines.

All are pretty close by to both Niagara Falls and Niagara-On-The-Lake.
at June 24, 2008

Email ThisBlogThis!Share to TwitterShare to FacebookShare to Pinterest
Labels: vacation

Oh wow, that is so interesting and GREAT photos Gill. I really enjoyed your description of those huge ships inside the locks. How interesting. Hope you don't suffer too much discomfort with that sunburn.

Thanks Denise, I tend to burn so easily, so I should know better.

Akkk!!! Too bad I was off the 'net for a bit...I'm JUST down the road from there. Literally! Could've had you over for tea :)

I know, if I had been organized I could have made and dropped off your produce bags, I haven't forgotten about them, I've just been busy.......

wow..that would be fantastic to see. And I have never seen a bridge that lifts up and then down like that. How interesting. :-)