Sunday's sermon and other "stuff"

So I went to church on Sunday and this week the reverend talked about Jesus being like a Mother Hen and how he protected all his chicks..........I have been thinking on and off for weeks about getting chickens!!

Anyway it was a full house......not really but there was a heck of a lot more people there than prior weeks, as St.Luke's is amalgamating with two other small churches, and Sunday was the Vestry meeting aka. annual general meeting.

I decided to go, as I have never been to one, so we all congregrate in the basement of our church, as it turns out the other two churches don't have heated washrooms.  Now you have to remember the median age of the congregation must be 60+; I am one of the youngsters!!  So obviously a heated washroom is a priority.

We had to bring our own lunch, although I have to admit, they put on a good spread as well if you didn't fancy your packed lunch!!  It was good chit chatting with people and getting to know people.

When it came down to business I was pleased to say the reverend made sure we all kept to topic, as we had two lots of churches business to go through, as two of the churches didn't amalgamate until the end of December, and the other church is just in the process of amalgamating.

So the gist of situation is that the weekly offering is down $12,000 from the year before, and although not in dire straits more fund raising is needed to keep these three churches solvent.  It turns out one person who was a main benefactor of the church has passed away; and people have become very laid back in their giving.  So they are going to be planning some fund raising, and one fund raising solution put forward, is you buy gift cards through a certain company (no idea what it was called) and a certain percentage goes to the church, which I thought was a marvelous idea, as it covers a lot of companies that we would all use on a regular basis.

Also one of the other churches raises funds by saving grocery store cash register receipts.  I didn't get too much info on that, but to my mind that too is a win, win situation.

I was wondering for any of you who go to church, have you got some successful fund raising ideas that you would care to share.  Our church does not have a website; the reverend does not even have a computer, he's not computer literate, so I said I would look into what it would take to build a website for the church.  I personally have no idea how to do it, but could ask ds if he would like to do one for us when works settles down for him.

They have also decided to put my name down on the reader list, which means one week I will be doing the reading........as I pointed out I didn't think this was a good idea with my accent, but they just ignored me.....knowing my luck it will be a week when there are so many long words in the reading that I have no idea how to pronounce it will be a nightmare!!

Oh and a sort of funny story.  I sat behind an elderly man, who it turns out is as deaf as a post.  Although he has been going to church for 50 + years, he still can't follow the service.  So he kept turning around to me and asking where we were at etc, which was fine when the organ was playing, but when it was dead quiet it was amusing.  Even funnier was when he turned around to me, just when it went dead quiet, and said, "how on earth did we get to that page?"

Still he's a lovely guy and he even sat next to me at the meeting.  I told him we had a date for next Sunday, same time, same place.  He's 84 next month I think he said; I'll ask him next week when I see him, and I think I will sit next to him, to save him turning around all the time!!

A bit after the fact I am afraid, but here is a photo of the bouquet of flowers that were handed out to each medal winner at the Winter Olympics, thought they were unusual: 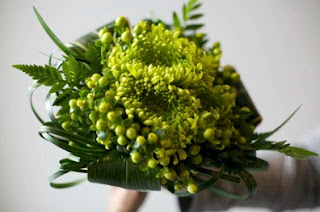 The bouquet is made up of a combination of spider chrysanthemums, hypericum berries and aspidistra leaves.
So it's the start of a new month, for those of you following the original Daily Savings Club programme that means you will be putting 75 cents per day in your pot.  I  hope you're hanging in there with this, as it is so worth it.

If you can be flexible book your trip away last minute and save some money, there are numerous online sites that offer these savings, including Last Minute   Expedia   Last Minute Club  Also on these sites are attraction discounts as well.  Check out these sites for your country.
at March 01, 2010

Our church has craft fairs, bake sales, a big yard sale.....good luck with the reading
kris

The Today show had a very interesting feature on the women who created the Olympic bouquets. Go Canada!

I also don't go to church, but you make it sound fun! I think those bouquets looked ugly - we kept calling them the broccoli & corn husk bouquet :)

Some people listen to the lesson on an audio Bible to make sure they pronounce all the words correctly. There are several online. Here are a couple:

Our little pastor has another approach. When he knows my husband is going to be there, he pulls him aside before the service and asks him how to pronounce the difficult names!!

Liz, where it was sunny and snowy at the same time today

I enjoy reading your stories about church, Gill. I can sense a new-found excitement in you ~ I think it's great!

As has been mentioned, there is always the traditional bake and rummage sales. Also, a lot of groups around here have been teaming up with online coffee and tea companies to raise money. People place their order for coffee or tea online, and a certain percentage of all sales go to that group.

Good luck with your church and fundraising.
Your photo of your dog made me melt.

i am not a churc goer, but chris does ever week....... we open the allotment andfield to the public too every year to raise funds for the church here........

Hi again Gill, send the husband back to work, so I can blog again!The churches around here do mostly rummage sales. My husband's church sent us empty contribution envelopes evey now and then. They probably mean that we have no excuse not to contribute!
Americans love the British accent, I'm sure it's the same for Canadians. Enchant them with your words!