It was another glorious day on Friday, and I got my first true load of laundry hung out. So I had to take a photo of it. I was extra careful not to include my bloomers in the shot..........don't want to frighten y'all!  It was blowing a gale so was dry quite quickly.  Do you see the snow still in the background?  We are supposed to get some more snow next week.  Hopefully it won't amount to anything.......... 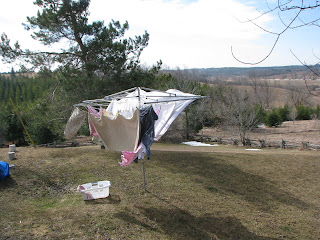 My column for next week on the Eden Valley Messenger is about Barbecuing, so I thought I'd take a photo of our barbeque, and then I found a joke about men and barbecues.......... 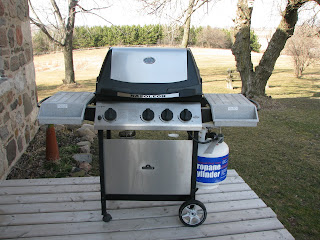 Definition of Barbecuing ... It's the only type of cooking a "real man" will do.

When a man volunteers to do the 'BBQ' the following chain of events are put into motion:

1.The woman goes to the store.


2.The woman fixes the salad, vegetables, and dessert


3.The woman prepares the meat for cooking, places it on a tray along with the necessary cooking utensils, and takes it to the man, who is lounging beside the grill, beer in hand.


4.The man places the meat on the grill.


5.The woman goes inside to set the table and check the vegetables.


6.The woman comes out to tell the man that the meat is burning.


7.The man takes the meat off the grill and hands it to the woman.


8.The woman prepares the plates and brings them to the table.


9.After eating, the woman clears the table and does the dishes.


10.Everyone praises man and thanks him for his cooking efforts.


11.The man asks the woman how she enjoyed "her night off."


And, upon seeing her annoyed reaction, concludes that there's just no pleasing some women.

Did you remember to put your money in your daily savings pot today?  We are more or less two thirds through the month of March, it's flying by isn't it?

Make your own laundry detergent and fabric softener its a heck of a lot cheaper than buying it.
at March 20, 2010

I hope you don't get any more snow Gill - but what will be will be I suppose. Like the definition of "Barbecuing" - so true! A

Spring must definitely be in the air if the washing can dry with snow on the ground too. Love the picture.

Now that joke started my morning off with a laugh, thanks Gill. Nothing like the smell of sun dried washing is there :)

Well, you should see the snow this morning. As for the laundry on the line, it'd be clear to the Gulf by now if I'd hung it outside. The wind has been howling. Around here they forecast "blowing snow." Not what I grew up with, that's for sure!

Thanks for the links for detergent and softener. Still working on my project. Need all the help I can get. Pennies add up.

Liz, in the Republic
PS Do you have a Search button for your blog, or is it just lost in my browser? I was trying to find something on your blog a few days ago, and I couldn't find anyplace to enter a search. Thanks.