I also went to the post office today to mail some things. One of them was an envelope that was going to Ireland. When the lady in the post office came to weigh it, it was 202 grams, and was going to cost me nearly $13 to mail. She said if it was 199 grams or under it would be $6.40, so off I go home to reduce the weight. What a difference a couple of grams can make, don't you think?

At this time of year I think most people probably feel more charitable to others than at other times of the year, don't you think? I know I do, and although we don't have a lot to give monetary wise I do try to do the odd thing. I go to a couple of shows each year and get a pile of samples and freebies from them. So this year I decided to put together two gift baskets and drop them off at the woman's shelter. Here are photos of them: 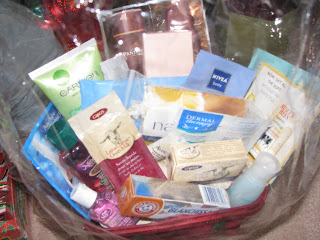 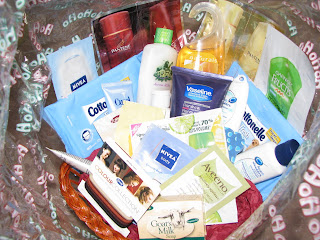 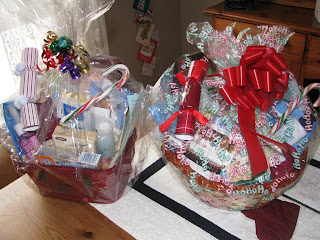 The shelter that I donated them to, is for women and their children. So with it being cold season, I also picked up a dozen boxes of Kleenex and dropped them off at the same time. It wasn't much, but better than nothing. One of my goals this year, is to get on sale toiletries and keep donating them to the shelter. (on a side note, did you notice the tiny Christmas crackers on the baskets, I buy them in the Boxing Day sales, super cheap, it adds a festive touch don't you think? I add these to all my gift bags)

Last but not least, I am all excited about a present under the tree. My mother and step-father send us gifts every year (thank you both) and we have had those parcels now for a month or so, as she sends them surface back in October. I finally got around to unwrapping them from the brown paper and putting them under the tree. Now being the nosy person that I am, I of course had a good look at my carefully wrapped present, and you know what, part of it looks exactly like the box that my Wedgwood ornament came in last year. 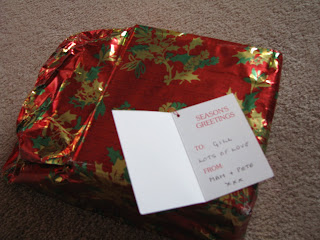 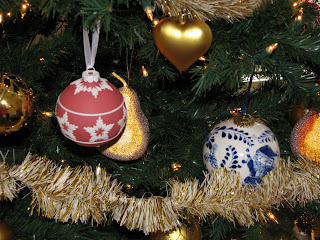 So I am now all excited, only 6 more sleeps until Santa comes!!!!!

Wow, busy time of year. Next week, we can all relax...

Now Gill-don't you know Santa gets cross when people peep at their presents?
Good for you doing baskets for the shelter- great idea

Maybe they thought there was a letter bomb in your card? and OMG to the price of posting, both topics are bonkers total. I love what you did for the shelter for women, that is such a nice idea. Well done and big hugs for you for doing it. take care fiona

Such good ideas you have with the baskets.
And to drop them off at the womens shelters, too.
I can't wait to see what's in the box and for the Christmas card post!!!

Such a great idea to give those baskets to the women's shelter. I see your Delft Blue ornament! It's lovely and makes a good decoration! Thanks for drawing my attention to it!

What a great idea to give the gift baskets to the shelters. Now I'm motivated to see what I can come up with really, really quick!
Kris

How thoughtful of you to make the gift baskets for the shelter. Thanks for passing that along. Were you able to reduce your package by the 3 grams?

Wow, a wonderful gesture in the Christmas season. Have a great weekend.

postage is such a pain...here too. the postal lady asked me if i wanted to rebox something to save $2.00. since there were no boxes that would fit the items i left it in the flat rate priority box and asked her to proceed...lol.
actually faired pretty good on posting all my boxes earlier this week...$52. everything i have to give goes across the us or to italy.

the baskets are lovely idea for the shelters :)

great idea about the gift boxes for the shelter! evelyn

thanks for all your great comments.......

Your so thoughtful to do that for the shelter, I do that every year too.!They so need it!!
Diane

Postage almost puts me off sending to our loved ones in Australia and New Zealand, but I think while the children are small/young it's exciting to have something come in the post.

Your baskets look wonderful - I will have to make enquiries about that locally - unfortunately it will have to be for next year now.

I can't believe I am already in MAryland for the celebration!
Wonderful gift ideas smarty!
I have heard people are getting their mail sliced like yours, folk are so poor they are trying to get money from the envelopes! how sad!

i love that idea. the gift baskets are really neat. good for you.
:-)