It always amazes me how much we all pay for the same thing, and what the differences are. So with that in mind, how much are turkeys where you live?

I was super pleased to be able to get that little fellow below for $1.27 per pound at Food Basics yesterday. I am generally pleased if I can buy them for $1.49 per pound so this was a bonus as far as I was concerned. I was going to buy two, but dh isn't that excited about turkey!! Isn't it strange when someone get all excited about turkey prices!!! 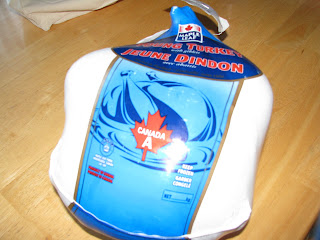 Now for Gas/Petrol prices. Not long ago we were paying $1.30 a litre, we're now down to 76.2 cents per litre. That is over a 50 cent per litre drop???? And they say the gas companies are not playing games???? What's your take on all of this? Also what is the price of gas where you live. My prices are all in Canadian Dollars.

For those of you in Canada and the States, here is a great site called Gas Buddy that tells you where the cheapest gas is in your neighbourhood. I found this site via the Bzz Agent site.
at December 06, 2008

Our petrol prices have dropped from around $1.70 to roughly $1.16 at the moment. This is Australian dollars.

I think our government and the fuel companies are holding us to ransom over the petrol prices, because they know we all depend on it to get around. Diesel is expensive and hasn't dropped very much in price, which is not good news for the farmers in the midst of drought.

Around the Ottawa valley we are at about 71 cents / litre. But diesel remains very high, which my tractor driving husband doesn't appreciate. Good deal on the turkey we haven't seen anything below $1.49/lb

Hi Gill,
Turkey prices are running the same as your ,however I had coupons and got them for .39 per lb. I baked one for Tgiving, one for making ahead dishes to freeze, plus 1 meal of reg. sliced turkey (sweet&sour, pulled bbq, soup,and broth) Have another for other meals.
Gas prices are averaging $1.59-$1.61. News said before long maybe $1 per gal.U.S. $.
You know Frugal is my middle name lol so always looking for sales and frugal recipes.
HAve a great wk.end!
Blessins',Lib

I haven't looked at turkey prices as we're not going to be spending Christmas at home this year. As far as the gas companies are concerned, my take on it is that they have had to bring the prices down as people worldwide aren't traveling as much and their profits have gone way, way down. That may be a little too simplistic and I am not expert obviously.

I will pop back tomorrow with some petrol and turkey prices for here and you can be truly appalled!

As of yesterday, UK Morrisons supermarket had petrol at 88.99 pence a litre, Asda's were 89.99 pence. That's down from a high of £1.21 a few months back. It has certainly made a difference but I don't think the prices they increased of groceries for transport have followed the price drop. But then you can guarentee someone is making a good profit somewhere.

Your 'gas' prices go up and down for two reasons: the price of crude oil, and the exchange rate between your currency and the US dollar. There is almost no other reason for movement. The (in Europe) large proportion of what you pay that is tax is pretty fixed. And in most places the market for gas/petrol sales is extremely competitive, with very little profit to the oil companies from this part of their business.

All of profit that these guys (who are still very small compared to oil-owning governments) make is from producing and selling CRUDE oil. This is a totally different business, and no oil campany would last 5 minutes if it tried to use its crude profits to keep petrol prices artificially low. Crude prices are a function of supply and demand in the world market.

All of which explains why your gas has gone up and down as you describe; without looking at recent USD v Loonie exchange rates, your gas prices seem to be tracking the price of crude, which went up to 140 dollars per barrel a few months ago, and has now fallen very quickly to 40. There is nothing more to it than that.

Count yourself lucky that you don't live in the UK, where the Sterling v Dollar exchange rate falls have meant that their fuel prices have fallen far less.

And the bad news overall is that the only thing that will save the planet is for carbon fuels to be extremely expensive. So if these now-low prices continue...

We went from Rand 10.75 to R7.30 recently. Our gas prices are fixed by the government, all petrol stations charge the same price and they are changed every few weeks. I'm in South Africa.