Shock, horror a chocolate crisis and other stuff!

I first read this over at Cambridge Lady's blog, its a bit of sad news for everyone, especially those of us who are chocolate addicts.  It seems that the Karft Company in America is taking over Cadbury's in the UK, read about it here  Now why that should upset the chocolate addicts amongst us, is that its a well known fact that all American chocolate tastes like cheap cooking chocolate (sorry but its true you guys), so if they play around with the formula or even worse make the chocolate bars in the States and ship them back to the UK all will not be good.

If I am buying imported chocolate it has to be made in the UK.  There is a difference between the taste of Cadbury's chocolate made in Canada and made in the UK, and the UK winds hands down.  It is one thing I do believe that the UK does better than us North Americans, and that is make half decent chocolate.  I was talking to a guy who works in a chocolate factory and he was saying that they have brought out Dove chocolate over here based on British chocolate, as its a lot creamier than the American rubbish.  Again not a huge fan of Dove chocolate, but won't say no to it.

Now on a more serious note with this, as per the news release the people are worried about losing their jobs in Britain as Kraft is known for cutting jobs and saving costs, so need to be aware of that as well......still worried about how my beloved Cadburys chocolate will taste though?

I was watching Breakfast Television on Tuesday morning, while I was doing my ironing and this week they are featuring You Tube videos of local people and they featured this lady, who has a spectacular voice.  I can see big things for this lady, where are you Simon Cowell!!


On Tuesday while I was taking the garbage bin out of under the sink, the phone rang.  So I left the garbage bag in the middle of the kitchen and went to answer the phone.  Stood talking on the phone for ages in teh family room, and heard Molly pottering around in the kitchen.  She had got into the garbage and I had, had soup for my lunch on Monday and it come in a bag, so Molly was licking out the bag, and it resulted in Molly having an orange face!! 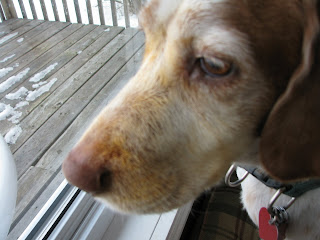 Molly is not going to be happy on Wednesday morning as I am putting her in the shower with me!!!

Did you put your money in your Daily Savings Pot today?

For organic weed control, use regular black and white newspaper, 5 sheets or so thick, and lay it over the garden and then dampen with a hose. The paper will break down and add organic material to our clay soils that will make it easier to dig in as well as a happier place for the plants to grow. You can start a garden with this same theory by just weed eating the grass down to almost nothing and laying the paper over top of the freshly "wacked" area, wetting and then cutting a hole in the paper to plant!
Posted by Gill - That British Woman at Wednesday, January 20, 2010

I fear for our beloved choccy, it really is the best in the world, but I wonder for how much longer?....xxx

There's a store near us that sells the Brit Cadbury bars -- and they are SO much better. I was rather dismayed to hear of the takeover as well.

Yes it is true Gill - Kraft have bought Cadbury's and there is speculation as to the workers keeping their jobs. I think you are probably right about UK chocolate being better than that in US but also found when I was in Australia that my favourite chocolate there just didn't taste the same and I'm not sure if that was because it is manufactured elsewhere or if it has extra additives.

No leave our chocolate alone !

Molly !!! well she does have a longish nose for getting into soup packs

Hi,
I lived in Keynsham where one of the Cadbury's factory's and I now live near another of their factories, and the reason Cadbury is selling up is because it was going to close these anyway and move to Poland, reducing production and production costs.
It would have killed Keynsham, a lovely little Town near Bristol, and Kraft have promised to keep it open.
A sad day when a company (Cadbury's) which started off on the moral high ground, caring for workers and their living conditions, sells out to these very workers in the name of modern business.

Hello Gill
Lots on our news as well today about the takeover of Cadburys. We have a factory just down the road from us so they will all be antsy about job losses
Take care
Cathy

Hi Gill! I heard about Kraft buying Cadbury, and have to say that I do love Cadbury chocolate and like you, I hope it doesn't change--But I also love Hershey's which is of course an American chocolate--I've had it my whole life and to me there's nothing like a Hershey bar (or a Hershey-Kiss or 2) to chase away the blues!! Okay, any chocolate bar does that! :-)))

Love the orange face on Molly--One of our dogs got into red jello once and I thought she was bleeding before I realized what it was!

Gill, you are a true dog lover. God bless you! Hope Molly loves her shower.

I still believe in capitalism and free enterprise. We need competition in the choco world! If Kraft does to chocolate what they have done to macaroni 'n cheese, we have cause for concern.

Liz, where the light is shining a little brighter in the Republic this morning

BTW Using newspaper is not organic: lots of ink in those newspapers which contains dodgy chemicals lol.
Still, you can use the same principal with long-life weed surpressor.!

I Agree about North American chocolate, it's pretty much worthless! I only ever eat imported chocolate unless I'm really desperate and eve then it doesn't even really satisfy my craving.

As for Molly licking your soup bag, not too long ago the youngest of my mom's three German Shepherds put his paws on the (turned off) front of her stove and started eating the soup she had heating on the back burner right out of the pot!!! He's all black, so she knew right away what he had been up to when she came into the kitchen and saw him sitting near the back door to the room with flecks of orange carrot soup on his nose!

I think it's likely Kraft will cheapen the Cadbury chocolate. I find nothing compares to Belgian chocolate. We have Dutch chocolate every year for Christmas. It's just a darned good Chocolate. I've heard French chocolate is the most pure as the government regulations on chocolate are very strict. Too much wax in American chocolate. Lindt is very good, but I believe it's all imported (maybe i'm wrong there.) I think it would be too expensive for Cadbury to produce their chocolate over this way then ship it over that way. I can see them getting cheap ingredients though, and you know what that means.

And to answer your question: Scott is still singing. He's in Atlanta now I believe doing a play then he's back to Cleveland again. Mostly nightclubs and such.

I think that 'Cheap-Mart' has had a bad influence on all goods in the US.
It's not that they try to make it taste bad, it's that they use cheaper materials, and, of course, it is not as good.
I always make a point of buying quality products.
And visiting local, small stores.

I'm surprised that Cadbury sold out to the Americans. Hmmm.

Well sometimes the free market just doesn't work. They'd be stupid to change Cadbury's chocolate but let's face it sometimes managers are just plain daft! US takeovers of companies in the UK haven't worked a lot of the time. Caterpillar are a supreme example of US mis-management in the North East of England.

If Cadbury's chocolate quality quality declines in the UK, people here just won't buy it. Let's face it Hershey chocolate is horrible, nobody here would touch that sort of stuff. YUK!. There's plenty of great competition too. Hope the US managers realise that. It'll be Thorntons for me if Cadbury's changes! Whispa bars for ever!