Do you believe in your "gut feeling?" And a recipe for Cheesecake...

Ds went to look at a house on Saturday, he is looking to purchase a house this year.  He has got a real estate agent looking for a house for him, and if any house comes up that he thinks ds would like he lets him know.  So this house has come up and its a foreclosure and from the photos it looks great.  Ds went to look at it and for a number of reasons, including his "gut feeling" he doesn't think he'll go for it.

As I said to ds I think if your "gut feeling," is telling you no then that's good enough.  I personally swear by my gut feelings, as if it doesn't feel right, it probably isn't.  Also with buying a house, you have to have that "right" feeling other wise it won't work.  Ds didn't like the layout of this house, and as he said he would only live in it while he was renovating it and then sell it again.  As he is an accountant, now through the end of April is his busiest time of year, so he also doesn't have time to renovate a house in a couple of months ready to put it back up for sale again.

Without making out that ds is the most perfect child in the world........okay he is....LOL  He does possess his father's skill for diy, and his mother's instincts for knowing when something is right or not and her vision for seeing through dirt and horrible decor to see what a house could look like.  Dd is also perfect.......had to write that otherwise I would be in big trouble!!!

I also rely on my gut feeling when meeting new people.  I was forever telling my boss at work I wouldn't trust so and so with a ten foot barge pole.  Nine times out of ten I was right.  So something has to be said about that gut feeling of yours.

I made a Sour Cream Cheesecake on Sunday using this recipe  the good thing about this recipe it makes a lighter cheesecake as instead of using 3 packets (1 1/2 pounds) of creamcheese it used only a pound and a tub of sour cream.  I had a can of strawberry pie filling that I used for the topping.  It was as good as it looks and that will be our dessert for the rest of the week.  If you haven't got sour cream, substitute creme fraiche.  This is a really easy recipe, make it first thing in the morning and you can have it for dessert at night. 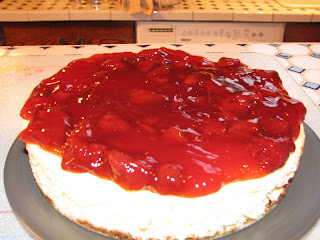 Did you remember to put your money in your Daily Savings Pot today.

Skip dessert at a restaurant, and eat it at home.  It generally costs around $5 each for dessert in a restaurant.  I worked out that the cheesecake cost me less than $10 to make and we have enough dessert for the two of us for a whole week, which is fourteen portions, at less than $1 per portion.  Something to think about......
Posted by Gill - That British Woman at Monday, January 25, 2010

I agree with you about the "gut feeling" Gill. One house we bought was because it suited our needs at the time but I never liked living in it, whereas the next one I loved the minute I walked in and it was a very happy house.

With you on the dessert at home too, so often those in restaurants are bought in and all taste the same.

What do you mean, THINK about eating cheesecake? Last ALL week? FOURTEEN portions? Argh! You've got to be kidding! What is your gut telling you? Do you REALLY trust your gut???

Liz, hungry in the Republic, putting sour cream on the grocery list, and already have the cream cheese

some call it gut feeling, some call it 6th sense others feel it is your guide or angel giving advice. Whatever you call it, it is the feeling that allowed pre-historic men to avoid the bit sabre-tooths so we are still here today, and I have never had anything bad happen from following my 6th sense, but all kinds of crap when I have ignored it!

We've always used our "gut feeling" with regards to houses and it's always worked for us!

I believe in that "gut feeling" too! It's guided me through lots of decisions in my life and is usually right-on...It's the same one I'm having right now looking at that cheesecake--My gut is telling me that a piece would be perfect for my breakfast! :-)

Hi Gill, you've won a book from my blog.

Please send my your postal addy by email within 7 days to claim your book :)

Gill ~~
I love your daily money saving tips, and especially love this one.
Blessings, GG

We always trust our gut instincts. And that cheesecake looks totally yummy.
kris

I also swear by my gut feeling, it has never steared me wrong!

As for that cake, it look absolutely, positively SCRUMPTIOUS!!!

It's a good thing I don't have a spring form pan or graham crackers as I wanted to go make that cheese cake right now! And there is no way I'd be waiting until after dinner to eat it either :)

I know someone who makes cheesecake and then freezes it in slices so they don't eat it all at once - I happen to think frozen cheesecake sounds delicious though, so it wouldn't work for me LOL :)

As for the gut feeling - when we looked at our current house the 1st time, I KNEW it would ours.

Oh Ahhhh just look at that cheesecake, how lovely? By the way it wont last you all week because anyone who is near enough will be popping round to 'help' you with it!
Gut feelings are usually there for a reason so I agree, go with them.
Take care
Sarah x

Heh my kids are perfect too!!!

You should see it outside. We are getting an old fashioned winter blizzard. I can't see across the street. The roads are mainly closed. It's unreal!! Hugs

my gut feeling tells me your cheesecake would taste very yummy! I am sure there is something better around the corner for DS.

I just came across your blog. You're so right about the gut feeling. You have some great recipes. I'm going to enjoy going through them all.

Gill, I left you a picture of my bucket. It's a bucket for sure.
~Liz, with buckets in the Republic

Sisters of the Blog said...

I agree with following your gut instinct. The minute i walked into my house, it called me, and i had a telepathic conversation whilst the real estate agent was showing me the house saying that i just wasn't ready for this yet.

And yet, the house is perfect, and i'm so happy to be living here.

My DH LOVES cheesecake--he and i usually get together with another couple and a dear friend of theirs to celebrate birthdays, as 3 of the 5 have August birthdays. One year, i made cheesecake for all of them. I don't care for it, and the recipe wasn't as simple as this one. The middle was a bit mushy, so i guess i could have let it cook a tad longer.

But, everyone oohed and aahed and was so happy to have it.

The recipe you have is simpler than the one i followed, and i'm sure DH would like it if i were to try this one.

Hope your Ds can find a house that truly calls to him. He'll know it when we sees it.

Fantastic looking cheesecake!!!
I'm definitely going to try that recipe.
Gut feelings have guided me in so many decisions and they have never let me down to this day.

A house is too big a purchase to get wrong if your gut feeling isn't right.

That cheesecake looks good. Is there any left?

Mmmm. Will get the man-child to try this one. The cheesecake he made last week was fab but far too fattening.

Yep, go with your gut feeling, it's there for a reason. That cheesecake looks so good! I love cheesecake.

I may be intuitive, but I don't always trust my gut instincts (except when it comes to cheesecake)!

Is Alliston a city, or still a town (with pretensions). I remember being there back in the 1960s when I went there with some university friends from Waterloo. Seems eons ago.

That cheesecake looks WONDERFUL. It's my favorite dessert.... well along with creme brulee!!

When all's said and done I follow my instincts and they rarely let me down. Where people are concerned even hubs still asks me what I think of a person and I would let him know if I had a good feeling or a bad feeling. Maybe it's hereditary. My Dad was an exceptional judge of character. Your cheesecake recipe looks wonderful.