Photos and other stuff, including a rant about screwdrivers!!!

I've come to the conclusion I like the word "STUFF." No idea why just like the sound of it when you say it..STUFF....

Anyhow on Saturday afternoon, I made up this month's quilt block for the block of the month club. Its called Fair and Square and for the first time ever, I actually followed the pattern, without running into a problem? So there is hope for me yet!! Planning on getting the black, white and red one done on Sunday. 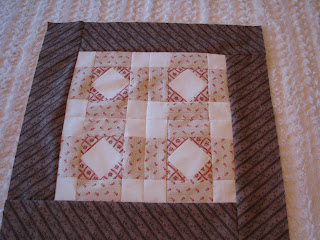 Now one of the things dh is busy with is building a closet in our bedroom.  The photo below is the before photo, actually at this point he had pulled off the crown molding on the ceiling and pulled all the baseboards off. 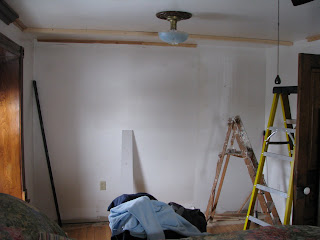 He had got the framing up and all the drywall up.  We now have to tape the edges and mud over the screw holes etc and sand it all..icky!! 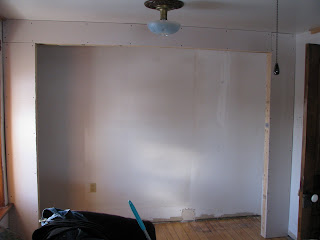 We are putting in sliding doors that will be in solid pine, and I will stain and varnish them to match the other doors in the house.  Quite excited to think we may have a proper closet by sometime in February.  Mind you not sure when we'll get the doors as depending on whether we get three or four doors, (can't remember what was decided in the end), it will cost between $400 to $500 just for the doors.  However it will look as though it has been there since the house was built when we get it finished.  I'm of the view if you want something to look right, 1. get my dh to do it (he's very, very picky and everything has to be just so), and 2. do it right, don't be cheap.  In this case we could buy cheaper doors, but they wouldn't look right with the rest of the doors in the house.

Did you put your money in your Daily Savings Pot today?  I did, got my money put in for the month and a bit more.  So I am just going to keep putting more money in there, the more the better, don't you think?

What's wrong with trying to do things yourself  around the house?  Of course rewiring or replumbing your house may be out of the question, but painting a room, installing some laminate flooring, even doing some landscaping yourself is a great way to learn a new thing and save you money.  If you're not sure how to do something, like changing some taps, ask someone at the store, or even better go online there are how to's on there.  Or if you know someone who is handy around the house, get them to come over and show you what to do, you may have to feed them, but its a great way of getting together with people and maybe you have a skill that you can barter with them.

I know I am going to try and do drywall taping for the first time today with the help of dh, when he comes in from work.  I figure putting drywall plaster stuff over the screw holes and imperfections will be just like icing a cake, so it can't be too difficult????

I do have a confession though......I am just plain useless when it comes to using any type of tool, though I did use a screwdriver on Saturday changing the needle in my sewing machine!!!!  Also I have no idea what so ever what tools are called.  Those different heads on screwdrivers just baffle me, and I hate it when dh or my dad ask me to get the "Whatever" screwdriver; what they should say to me is get the one with the criss-cross on it, or the square thingy on it, or the straight edge thingy on it, but no they insist on using the name and I have no idea which one they are talking about.

Whoops, that Money Saving Tip turned into a rant didn't it!!
Posted by Gill - That British Woman at Sunday, January 24, 2010

You made me laugh with the rant about the screwdrivers. I'm exactly the same. DH will ask me to grab a certain screwdriver and I haven't a clue what he's asking for. I solved it by buying one of those ones with interchangeable heads and just hand that to him!

Heehee, make up new names! Thats what I do, I don't remember what all the tools and gadgets are called, usually end up with names that represent the face that is pulled whilst they are being used or possibly the actions required to make them work!
Good luck with finishing off the cupboards, they look like they will be lovely, plenty of storage space!
Sarah x

Your screwdriver rant made me laugh! But no worries, I'm useless with screwdriver names as well, I usually just call them 'square', 'cross' and 'star'!!!

Putting mud down is NOT a piece of cake, let me tell you. It's a tough job even though it looks easy. Just remember, the less mud you put on the less sanding you have to do. Ask me how I know!!!

Anxious to see the doors when you finish. Sounds so nice. We had an old, old house when I was in high school. What a trip remodeling! Retrofitting A/C was wild. Poor mum had fiberglass insulation up her nose. Awful.

Screwdrivers I have mastered, along with reading a measuring tape properly. It's the one thing we women have to conquer. Feel the fear and do it right! Hell, Mike Holmes won't expect anything less.

As for doing the drywall compound, yes it is a lot like icing a cake, only we don't get to eat it, but we will see the evidence for ever if it's not done right.

I use the new low dust type and make sure you knead it a few times on the hod or bucket whatever you our using. This will get all the air bubbles out before you apply it to the wall.
If you don't do this you will have small air bubbles which may not be covered when you paint the wall. I just hate that look. For an extra 5 min. of time you can have perfection.

Oh ya, if Mike Holmes reads your blog you know where to find me.

I'm not too bad with the screwdrivers, have no idea what they're called though. I just find one that fits the job. Not that I do much, generally changing batteries, putting toys together and the odd IKEA stuff. Yes stuff's a great word. Covers a multitude of sins and has a great sound to it!

Now tomorrow I'm having a go at replacing the stuff around the sink and the shower cabinet. Sick of waiting for the "hubsband" to get around to it so I asked Sonny Jim what I needed. Hope I do it OK and get it done before hubsband comes back or he'll be full of criticism. Makes you laugh doesn't it! Or maybe cry.