I bought a new ironing board cover on the weekend, so while I was changing that, I figured I would do some sewing while I had the ironing board out.  I sewed the borders on the pink and cream quilt blocks.  This one has brown borders.  I am not going to do quilt as you go I don't think with this one, as I want to put some borders on it.  In fact looking at this photo a cream border will make it pop don't you think? 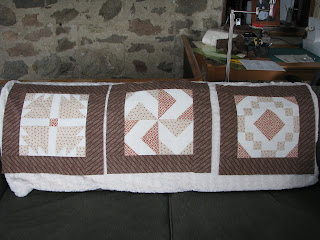 While I was sewing I had the radio on through the computer, never done that before, it helps if you have good speakers and we seem to have pretty good ones.  Anyhow this song came on, "Lay It On The Line," by Divine Brown, it's another one to ask dd to put on my i-pod before gardening season.  Do you listen to the radio through the day?

My mother rang me on Wednesday and we were talking in general and I was saying that I had been busy washing the kitchen floor by hand.  Its not something I do very often, I generally use a mop and bucket.  However what we were both saying is that no one would notice if I wash it by mop and bucket or by hand, and sure enough dh never noticed I had washed the floor!!!  Still it felt good to give it a good clean.  I moved the fridge and stove out and gave that a good clean behind there.

It was super windy on Wednesday as well.  It calmed down a bit by mid-afternoon so I went outside to snow plow.  First I had to shovel in front of the garage door as there was a huge snow bank in front of it.  I was pooped by the time I had shoveled that.  It was higher than my knee.  I had to shovel it out of the way before I could get the snow blower out of the garage.  One good thing though, I didn't have to kick the door to open it today.

Our driveway is a P shape, and due to the high snow drifts that blew in on Wednesday the curve of the P is no longer usable.  The snow drifts are too high for our snow blower to go through.  Luckily the straight side of the P is clear so that's good.

Did you remember to put your money into your pot today?

Clean out your closet. Go through your closets and try to get rid of some of the stuff in there. You can have a yard sale with it, take it to a consignment shop, or even donate it for the tax deduction – all of which turn old stuff you don’t want to use any more into money in your pocket. Not only that, it’s often a psychological load off your mind to clean out your closets.

Hi Gill, Glad your blog is staying the same. Your quilting blocks are great. The quilts will look amazing when they're finished.
Elcmae

When in Canada I listen to CBC most of the day, I have a tad of a crush on Gian Ghomeshi, his program Q (10 am) is f.a.b.u.l.o.u.s. When in the UK I tend to listen to radio/music more via laptop!

I think a cream border would look lovely with that quilt Gill :o)

As for the radio, mine is on all the time at home and at the office, usually with a classical music station.

Even if the world is falling apart outside, you just feel more like you have your part of things under control when the closets and the pantry are organized. You are so right about that being a psychological boost!

Liz, in the Republic

I listen to the radio all day - right from when I start my commute until I sit down for dinner. I love listening at work, too. I actually just blogged earlier this week about how I tune into BBC stations all day to feel a bit closer to home!

Your quilt is beautiful. You don't have to hand-sew all those pieces, do you? Surely it's machine sewn? I can't imagine how much work it is!! Looks lovely!

I am a big news junkie so start the day off with the TV on local news then on to Sky News for national & world news for about 15 minutes. The rest of the day is usually spent listening to one of our local stations, 5 Live, Radio 4 (especially The Womans Hour) or my own music. I do love the radio, and a couple of years ago we bought a WiFi radio that we can take around to any room and listen to all the stations available on the internet.

That said, lol, I usually end up on one of the ones I mentioned. May be tons of choice, but I know what I like :-D

Gill, I really like your Pink and Cream quilt. I am seriously contemplating attending a Quilter's Guild meeting this evening. I always admire quilts ~ I just don't have the creativity to piece one together!