It was blowing a gale force wind on Sunday which in turn made it feel freezing cold outside.  However that didn't seem to stop the snowmobilers and there seemed to be plenty of them out and about on the trails.  Its not something I have ever done is snowmobile, as I am not big on outdoor activities when its minus 100 outside!!!

I was talking to my mother on Sunday and she was telling me all about the going's on in Britain with the rotten weather they have been having.  It seems to me a lot of problems stem from the "Health and Safety" issues, maybe someone from Britain could explain it better than me.  What we both were saying that people have gone soft.  My mother was telling me when she was born, she was born at home and her god mother made my mother her first snowman, out of the snow that has blown in through the crack in the bottom of the window panes the day she was born.  Yes it was a minature snowman, but the windows were that drafty and old.  No one had central heating like they do now, and the year she was born was a bitter, bitter cold winter.

We lived in the country and very rarely were the schools closed.  My mother was saying the city schools are closed, as some teachers can't get to work.......so why close the school, get teachers to take extra pupils in their class.  Over here if its too cold to let the kids out at recess/playtime, they have indoor recess, where the teachers do something fun with the kids.  Things are a changing as they say and I don't think for the better do you?

On a more positive note when we were out on Saturday I picked up a couple packet of seeds.  A packet of cress, as I love egg and cress sandwich.  Over here parsley is the garnish of choice, but quite often in Britain its cress (please correct me if I'm wrong.)  So I have a craving for an egg and cress sandwich, so plan on growing some. 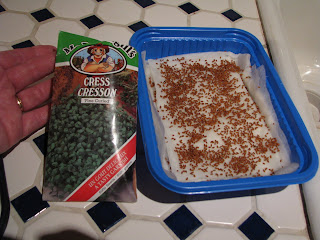 I also picked up a package of heirloom sweet peas. 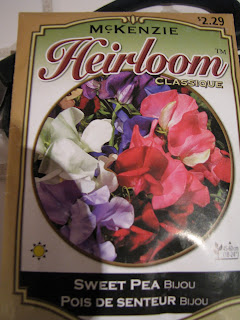 Now granted our risk of not having frost will not happen until after May 24th, I can dream what my garden will look like and there is nothing more lovely than a bunch of sweet peas.

Did you remember to put your money in your pot for the daily savings club?

Turn off the television. One big way to save money is to watch less television. There are a lot of financial benefits to this: less exposure to guilt-inducing ads, more time to focus on other things in life, less electrical use, and so on. It’s great to unwind in the evening, but seek another hobby to do that.

I want to make some changes to my blog, is there anything that you would like to see more of?  Or anything that you want to see less of?  Any and all suggestions would be greatly appreciated........
Posted by Gill - That British Woman at Monday, January 11, 2010

Oh yes this country has gone mental...When I was at school we walked a mile there in PROPER snow...in our wellies and took our slippers to wear indoors. It's any excuse to shut them up now. Pathetic...xxx

I don't remember walking to school in the snow but I do remember walking in the smog, holding the hand of the person in front and back so we wouldn't get separated, because we really couldn't see a hand in front of our face.

I love reading your blog! especially the saving tips and I have started my own money jar and think it's a great idea! Recipes with pictures are what I would like to see more of other than that I enjoy reading your blog, thanks and keep up the good work!

health and safety in the uk is getting past a joke i was tipping next to a council depot last week down south and was asking them why they hadnt gone out to grit and they said the roads were too dangerous to go out on and played the health and safety card - just plain lazy i say - any excuse
as for changes , put a counter on like mine and you can see who is looking and from where - its an eye opener

It is mad here that everything seems to come to a standstill each year we have heavy falls of snow. The powers that be obviously don't make contingency plans. This year many roads and pavements remain very icy and hazardous because we haven't enough salt or grit to spread on them! Hospitals are treating record numbers of broken limbs.

Love your blog and can't think of any changes I would like to see.

My Mom used to tell me the same kinds of stories. When my Mom was growing up, they had to work so hard, just to survive because they didn't have much. I think I take a lot of what I have for granted and I don't know that I could put in a days work like she used to have too! I'm very fortunate....

I can never understand why people want to go out and "play" when it's so cold!! STAY WARM, and I hope you get a break from it very soon!

Looks fine to me. Same layout as mine too. I've toyed with the idea of two distinct blogs but I don't think I'd cope. At least you can put pictures in the middle of your blog, I can't!
can you explain something. What are Team Members? I dont get it.

i would love to see you talk more about what you're cooking. not necessarily recipes but even just a mention of what the menu is like in your house for the day...gives me inspiration lol.

I never had to walk to school but my father liked to tell us how he had to when he was young, and the snow was so deep that during his more then 2 mile walk to get there, they would actually walk right over top of the fence posts! Things have changed, alot not for the better, but there are still some things that I think have improved. Like computers and blogger! :-) I heard about the weather in London and how much snow they had gotten. It was being said that here in germany we were suppse to get that same storm front that caused all the chaos in england, but in the end our storm came up from the south some place! According to your weather indicator, it is realllly cold over there. I guess I won't complain about our temps anymore, cuz it does seem that others have it even colder! I hope you have sunshine though. that is something we toooo often have to do without.

I'm still here. haven't commented for a while because I'm way behind on reading but hope to catch up in the next day or two.
did I wish you Happy New Year?
if not,
I will now.
:-)

Just came back to see any updates. I missed the part before where you asked about changes, and can tell you that your blog is fine the way it is. I think that's why many of us enjoy it so much. Thanks for stopping by. Funny about your comment. I was going to make that WW soup before I saw this recipe. Have a good one and stay warm.

I'm with you about closing the schools. Here in Montreal they hardly EVER close the schools, I remember a few times in High School the roads were kind of bad because of freezing rain or snow and some of the teachers were late, so they just collected the students from the late teachers' classes into one of the cafeterias and had us wait there until the teachers showed up. Voilà! But then again, this is Montreal. We're really built for the winter ;o)

Hello,
Chatted with my lovely friend who is stuck in Chicago and we both agreed that England is clueless about snow.
Chicago has a very brutal, snowy winter every year, not every other year or every few years, but absolutely without fail, EVERY year!
Anyway,that's it for now, time to go out into our mild winter and pick up Child.
x jo

I think we've gone soft here too. Bus drivers now drive into the lane, drive up to the house to pick up the kids and drive out again. We walked over a mile just to get picked up by the bus when we were in school. They have more days off than they should and if the windchill is below -35C they don't attend school. We never had that type of "softness" when we were going to school.

Have a wonderful day friend. Hugs

Gil, I enjoy whatever you write. I particularly like the 'life in the country' bits and updates to the house.

Yesterday's winds took my breath away. I think you're a bit colder than us, but living right on the lake the winds come in unhindered and so bitterly cold. Bone chilling.

Just the other day I was thinking "I want a snowmobile!" It's more because I don't like walking in snow with my feet problems and all the ice. I'm scared of falling, though I do it regularly enough without major injury so far...

I was 5 and walked a mile to school by myself! Snow and all kinds of weather. I was highly distractible even then and remember regularly getting in trouble for being late because I stopped to pick flowers, build a snowman, gather leaves, follow a bunny... My five year old goes NOWHERE without supervision.

Our school closes right and left it seems, which I really cannot stand! Hopefully it will warm up soon
kris