I got the deal of the week this morning, I called in at No Frills to pick up some pectin, and they had a canning kit (photo below) for $1.99 Can you believe that? I mean the the tongs alone are $6.99 at Canadian Tire. I saw the exact same package in Canadian Tire for $13.49 just the other day. 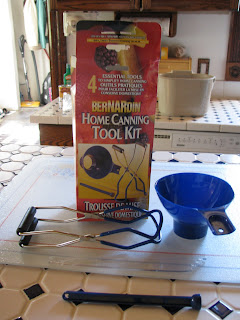 So I decided to make some jam today and used the light version which only uses 4 1/2 cups of sugar per 6 cups of crushed raspberries, and the "light" pectin. It only made four jars, but it looks and smells good. 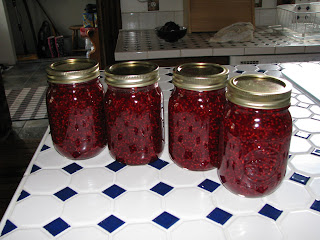 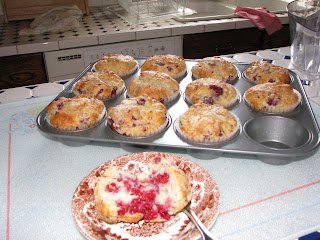 I also made a Raspberry Coffee Cake, using this recipe. Again simple recipe, and one that I will make again. 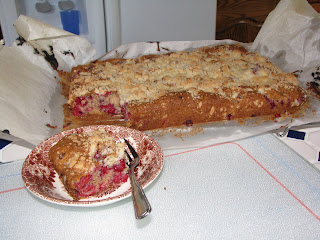 Finally I made some Blackcurrant Jelly, and to cut a long horrible story short, which included it boiling over on my stove, still haven't got that mess cleaned totally off the stove top. The jelly could be used as glue, plus it is only half the amount it should be. Can any expert jam/jelly makers tell me what I should do? As I have no idea what I should do, as I can't even spread it. It wouldn't be so bad, but I don't even like the rotten stuff!!! 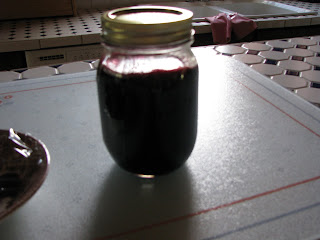 I wish I had taken a photo, but I didn't. I picked up a roast of beef On Thursday when I was in No Frills, it should have been $8.89, and it had a $5 off sticker on it, so I put it in the crockpot using the recipe below.

So all in all I had a good productive day, though I was pooped by the end of the day.

I saw a Northern Flicker in the garden also on Thursday night, but I couldn't get a photo, as it flew away. Here is a photo of one, taken from this site: 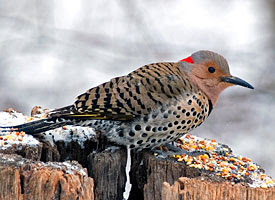 Also at the end of the field, I saw a wild turkey with her young. Again I went to photograph them, but if course they disappeared!!! Here is a site with more info on them.
Posted by Gill - That British Woman at Friday, July 17, 2009

Can I come over for some snacks? Those pictures made me hungry - well actually I'm always hungry, side effect of being pregnant, LOL!

I wonder if the muffin recipe would work with strawberries...Hmmm.

what a day you had...busy bee you were.
you are feeling better i take it?
hope so.

can you mix the blac currents with some other berry? it sounds like it was boiled too long, maybe a little less boiling next time? We are big meat eaters (I have two male teens) and it is killing the budget. We ahve no choice as veggies just don't fill up growing teens. I noticed hamburger was 12 dollars a family pack the other day, wow ridiculous! evelyn

ooh put the kettle on, i'm coming over for homemade jam and muffins.
they look lovely :-)

You did a lot in one day. Can't tell you about the black currant jam, that's one I haven't made.

We have wild turkeys here too. I've only seen them once when the babies were small. I've seen them often though when they are full grown.

Don,t forget to tell that if there is yorkshire left over you can have it with,jam,treacle or sugar.

Hi Gill,
Welcome to the country life, filled with work and fun!Lol
It is hard work but so worth it.
I've had a super busy summer,no time for posting ! Now we're cutting fire wood ,gardening etc.
Hope you have a great wk.end!
Blessins',Lib

A great productive day and can understand why you were so tired at the end of it. It all looked lovely. I remember the Crockpot beef dish with the Yorkshire puddings as I made it after you posted it and we all thought it was delicious. No clue on the blackcurrants, it's been years since I made any jam and never blackcurrant.

Oh my gosh all that wonderful food looks absolutely yummy! I love raspberries will definitely have to try these out.

I made the muffin recipe this morning with strawberries. The batter was really thick so I ended up adding another 1/3 cup of milk. I only managed to get 16 muffins out of it. The kids and I had some for a mid morning snack and I found them very dense, almost cake like. They were tasty though.