Not sure where the weekend went too. One minute it was Saturday morning, before you know it, here I am writing this on Monday night.

We got the stairs put in on Saturday morning, dh's boss and ds both helped dh and the carpenter put them in. Below are some photos of them....however we are not allowed to use them until I have them stained and varnished, so at the moment they are a bit of an ornament...LOL We have put a couple of sheets of plywood over the opening to prevent anyone using them. It's my goal to make a start on the staining this week. They are also a accident waiting to happen, as we have no banister or railings up at the moment, luckily we have no small children living in the house, just to senile adults...LOL 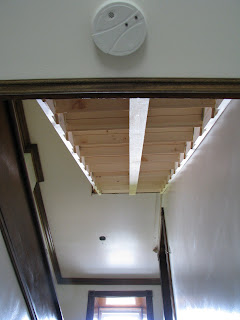 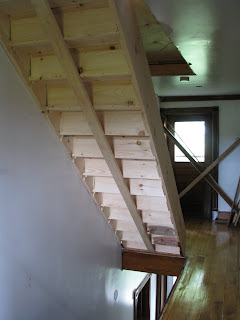 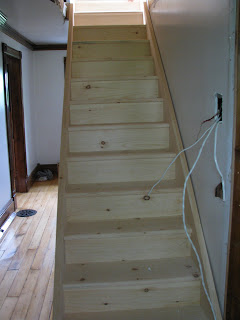 Dd and boyfriend also visited on Saturday and then later in the afternoon we went out and picked some things up at Lowes we needed, including an outside light. When we got home we opened the box and it was the wrong light in the box.......so will have to take that back and exchange it.

Sunday was a strange day weather wise, as it kept raining on and off, however I did manage to make a start on cutting the grass as I only did one hours worth of cutting the grass this past week. The weather has been terrible with a lot of rain, so I was determined to get something done, as if I wait until the grass is dry I could be waiting forever at this rate. Dh did some electrical work in the attic, but it's a long slow job.

A lady and her daughter called in to see if she could pick some blackcurrants and I helped them pick half a pint before the heavens opened. She said she would pop by after work on Monday night. Well "S" did call in and we "clicked" and I do believe we will be firm friends for ever more. We have so much in common and she is a really nice person. We picked another 4 half pints of blackcurrants and 2 half pints of raspberries,she is going to be busy making jam.

I spent most of Monday cutting the rest of the grass, and I am pleased to report by 8pm Monday night the whole of the grass on the property has been cut!! I think I cut a good four acres, of the 4.8 acres we own. So it's not a five minute job.

You know Monday was a good day, and it felt good to live where we live and own what we own; it was one of those days, if you know what I mean?
Posted by Gill - That British Woman at Tuesday, July 28, 2009

Yup...one of those days that make all the work worthwhile.

time flys doesn't it. you have been a very busy bee. my goodness mowing all that grass :) you must be getting the hang of it.

have a good afternoon ms. gill.

you are constant motion person!

I love Lowes...too much says hubby...the stairs will be so lovely when completed...not that they're an eyesore, now!
Sandi xo

I can appreciate the work you have done on the stairs. Twenty years ago I helped my mother and step father put theirs in a four story house. We had a party after we had recovered to celebrate. My thoughts will be with you while you are doing the staining, LOl