Well as promised here is the before and after of the work that was done in the landing ceiling to get it ready for the new stairs. 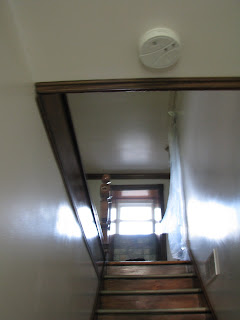 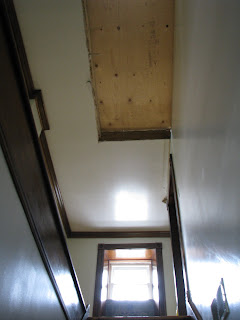 I know you're disappointed, its nothing exciting, but it was vital work, otherwise we couldn't put the stairs in. Next week's photos will be more interesting when we actually see stairs. Its very dusty in the house, not helped by the fact they used a chain saw to cut the joists, as that was the easiest, fastest way to do it. It was noisy though when they used the chain saw and it set off the fire alarm!!! Still it's a great job over with, can't wait until next Saturday when the stairs arrive.

Now for the allergies part. My poor eyes feel awful they are all swollen, red and puffy. They seem to be worse at bedtime and in the morning, is that typical? Also not sure what is going on with my ears, as there was gunk in my other ear Sunday morning, that's generally a sign of me getting an ear infection {{{SIGH}}} I swear if I have to go back to the doctors again this week, I will not be happy :0(

Afternoon out: that is a bit of an exaggeration, we went out for a couple of hours on Sunday afternoon to Home Depot, and to do some grocery shopping. I just needed another "A" word.

When we got back I actually made a start on weeding the veggie garden. I did more after supper and managed to get a trailer load of weeds. I can sort of see the veggie plants now, I mean it was a forest of weeds. Nothing though is really doing that well, other than the raspberries and blackcurrants!! Still as I said before, we hadn't planned on putting in a veggie garden this year, so anything I pick from there is a bonus.

Dh was a love and repaired my headlight on the car, which saved us another bill from the garage. He also did some more work on the fireplace and he installed my dragonfly door knocker. I should take a photo of that as it is cute.

One thing I do know for sure this weekend sure flew by, as do most days.
Posted by Gill - That British Woman at Monday, July 20, 2009

Had a friend who put in a dishwasher for his daughter using a chainsaw. Think his daughter was used to it, but his son-in-law didn't know quite what to think. Of course, it was all over before the fellow could do a thing about it. . . . . . At least the dust won't be forever!

Gill, I'm concerned about that ear. As to the allergies, B is always worse in the morning. With all the dust from the renovations at your place, I'm sure they are making the allergies worse. B always has way more problems when we are renovating.

Nice to see the hole cut and ready for the stairs. Hope it all goes as planned.

a good morning ms. gill.
sounds like you had a busy weekend.
i have tons of weeding to do in my herb garden. have not tended to it in the longest time. raining today so, maybe i will get into it one evening after work...since nature is softening the ground to make my work easier :)
we mowed yesterday and everything looks so nice. i do the hand mower and hubby the ride on.

hope you get a handle on those allergies sooner than later.
hugs

My son, and my mum, neither of whom usually suffer badly from hay fever and allergies, have been hit really hard this year. Teen is on a clarityn a day - I wonder if a new plant species or pollen (extra strength) has come out to haunt the planet?