We saw Celine Dion in Concert on Thursday night.......

and she was good, I mean really good. We bought the tickets last November and paid the most we have ever had for a ticket at $211.50 each. However we had great seats and they were worth every penny. I had hoped to take some photo's of the outside of the Air Canada Centre but there was construction everywhere, as they are building condos all around it.

Her opening act was a guy named Gordie Brown. Now I have to say I have never heard of him, but he was the best opening act we have ever seen. He was a comedian and an impersonator, and he was good. He had the audience in stitches and we all stood up and clapped at the end of his act.

The photo below is of him impersonating Elton John. 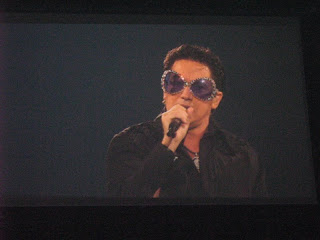 When Celine came on the whole place was on their feet. She can sing and other than the chest thumping thing that she does you can't fault her. Her voice is as good as on her Cd's. 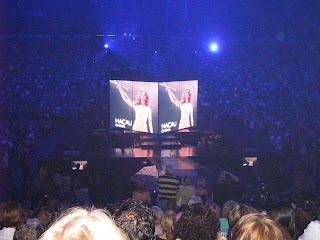 She had a square stage and she rose up out of the middle to start her show. In costume one, which was my favourite. 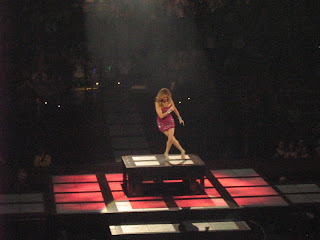 Where the band was located, those sections also rose and lowered which was pretty neat. 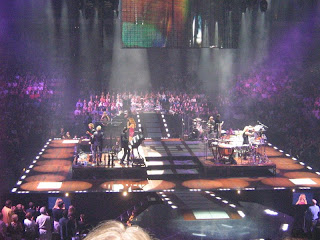 It also had a moving floor, like the ones you see in airports. The dancers did some nifty moves on that floor. 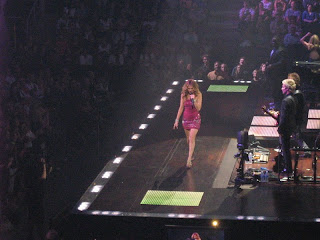 As I said the stage was square in the middle of the Air Canada Centre, basically in the middle of the ice rink, as that's where the Toronto Maple Leafs play and the Raptors. There were two arms extending out of it and we were sitting pretty close to one of the arms. Both Celine and the dancers kept coming to the end of the arms, so we got a great view of her. 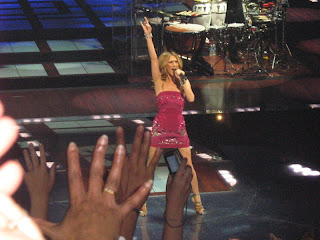 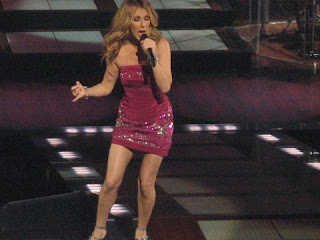 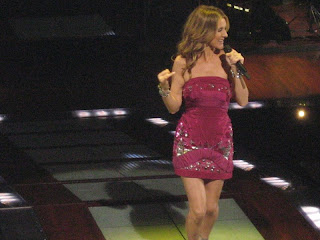 Now this is Celine in her second outfit, wasn't keen on this one. 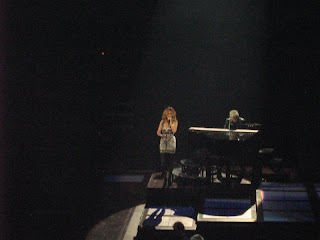 This was her third outfit, wasn't keen on this one either. 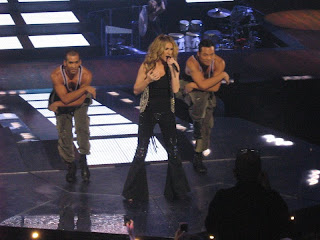 It was the shoes/legging/strap things on this outfit that was weird. 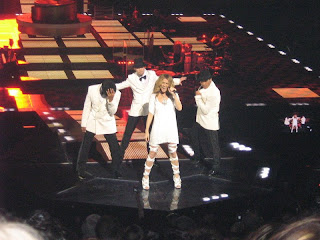 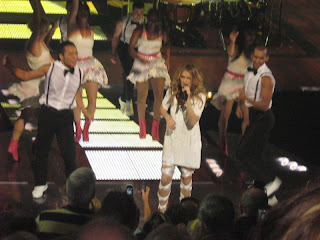 This is what she wore on her 1st encore and it was a lovely dress, unfortunately she didn't face our way so I had to take a photo of her on the jumbo-tron. 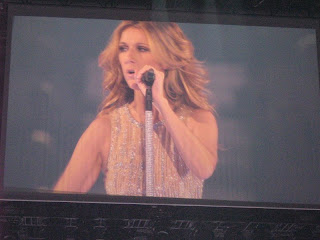 Her 2nd encore she sang the song from Titanic Now I didn't take a photo of this outfit, as I took a video instead. Now as ds points out if I post it on this blog, I could get into trouble. I didn't like this outfit either, it was a black floaty dress.

I sound like the fashion police don't I...LOL However as I said at the beginning, you can't fault her voice she has a lovely voice.

The only downside to the night was going home. It should have only taken us 30 to 40 minutes and it took us 1 1/2 hours to get home, as Highway 427 was down to one lane due to roadworks, however you first had to get three lanes to go into one lane. Whose ever bright idea that was wants fired, as not only was their a Celine Dion concert on, there was a concert on at Molsen Amphitheatre, plus the CNE is on, and the Chinese Lantern Festival at Ontario Place. The roads were busy, we were not impressed.

Then on our highway to get home the new part where Daisy (GPS system) always has a hissy fit that too was closed off, so we had to make a detour there. Luckily we had turned Daisy off as neither of us were in the mood to hear her wittering on!!!!

Despite that we had a super night. If any of you get a chance to see her in concert do, its well worth the money, and I am not a big fan of hers normally.
at August 30, 2008

Hi Gill! My friend saw celine in Boston, and loved it as much as you, and sh, too, commented on the opening act, she said she was crying he was so funny! Have a good weekend, Barb from ocean waves quilts.

Wow, great pictures, Gill! Your seats really must have been great (and should be for the $)
I would like to see her one day. I'm not a huge fan, but she does have an incedible voice.

I remember the QEW/427 so well, we lived in Mississauga for many years, and worked in Toronto.
(I can't remember if I've mentioned that to you already)

Have a great long weekend,
Niki

Wow, wonderful pictures and so happy you had a fantastic time. There's nothing like sitting in on a live show and I hear she puts on a great one.

Hi Gill, I am not a great fan of Celine Dion, but I have heard that she gives an amazing concert. I also agree that she has a huge, amazing voice...her outfits...eh! Those were expensive tickets; hubbby and I went to see the Blue man group in Vegas...the tickets were pricey as well..but the show was to die for!

I love Celine! glad you got to see her. best friend and hubby saw her in Boston and it was the concert of a lifetime! evelyn

It sounds like you had an amazing time, and you must have had great seats to get such super photos.

Hi Gill - thanks for the show - it looked fabulous. Love live performances, always a thrill.

I always enjoy your posts so have left an award for you on my blog - hope you can pop in sometime to collect.

Gill, glad you had a great time.

It was worth every penny, and we are so glad we went, as neither of us are big fans of her. She's back in Toronto in September but we are away, and honestly I'm not sure if I would see her again.

Thanks for all your comments,

Glad you enjoyed the concert. She must have spent as much time changing her outfits as she did singing.

We saw Neil Diamond in June. He was brilliant. Do go to see him if you have the chance. And he only changed his shirt once.