I think there was something in the water around here....

as we have 8 little boys all around the 2 to 3 years of age that live within a few doors of me. 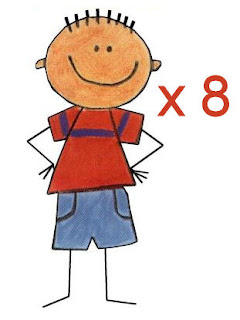 "R" lives next door to me and will be 3 in September. He is a cutie, love him to bits, and its been a joy to see him grow up. He was only a week or so old when he moved in with his family next door to us. He has a super imagination, he was digging for treasure the other day, while me and his mom were talking. He then recites his A,B,C's for me. Then he decided to water my rocks. However poor old "R" is a klutz, every time I see him he has another boo-boo, I don't know. He also gets on well with dh, which thrills dh to bits, as dh loves kids. His sisters are also great neighbours.

Now behind me are twin boys "M" and "C", along with their big sister "Y" They had their third birthday party yesterday. Now they are not identical, but are very similar. I generally can tell them apart as "C" has curly hair, and is more rambunctious, in fact "C" can be a little devil when he wants. One of his tricks is to hurl toys into our back yard. I don't mind the balls at all, but when he throws toys over, that's a different thing.

So last time I saw him do that, I went to talk to them (we have a six foot fence all around our yard, its a standard thing up here), and asked them who threw the toys over (I knew is was "C"). So both "M" and "Y" shout it was "C", so I told "C" that if he threw the toys over again, I was going to give the toys to boys and girls who wanted toys, as obviously he didn't want them anymore. Well, that worked for a while, but I see I have toys in the back yard again......oh well, they are cuties, and had stunning deep brown eyes.

Two doors down from the twins, is another couple who have a boy and a girl. The girl will be around 5 or 6, and is called Melissa,, and the boy is around 3 and called Mitchell. I hate those kids' names now, as the mother is constantly screaming at the kids, as they are both little devils. They also have the Chihuahua that is constantly yapping, the one I keep saying I am going to wring its neck!!!! I am a dog lover, but this one never stops yapping.

Opposite me, there is a couple with two boys, "K" was 3 in March, and his younger brother "N" was 1 in May. Don't know them that well, but from what I see "K" is a bundle of energy, and keeps his parents on their toes.

Next to them is "N" and he is a sweetie as well. You don't see much of them, but when I do see "N" he generally has his toy cars or trucks with him.

We then have a couple of other boys who will be 3 going on 4, living in two houses. Both sets of parents are Filipino's and keep to themselves.

Girls are few and far between on our street it seems. We also have triplets on the other end of the street, I think its two girls and a boy. They are oriental and its generally the grandparents walking them in the triple stroller, and they speak little to no English. They will be coming up to a year old I think.

Our street is a mix of people from all ages. There are young couples starting out with no children. Couples with children and a couple of empty nesters like me and dh. It makes for a nice mix of people.
at August 04, 2008

Email ThisBlogThis!Share to TwitterShare to FacebookShare to Pinterest
Labels: children, our street

You almost have a football team!

Hi GIll,
Must ne in the water!lol
I Love where we live no neighbors real close by .:o)
Hope you have a great day!
Blessins',Lib

they will have lots of playmates when they grow older. it seems to go in cycles, more boys then girls, then more girls. when mine were born there were more boys. evelyn

Oh what fun! I really wish I could adopt grandparents around here for my 4 children. We hardly even talk to our neighbors! My kids only have their grandpa, but he's usually pretty busy and doesn't do a whole lot with them. My mom is out of state, as is my dh's family. :( Makes for pretty quiet and lonely holidays.

evelyn.......you're right one minute there are a lot of boys being born, next lots of girls.

We used to have a lot of small children in our neighborhood, mostly boys on this street but they all grew up and moved away. You could really get a barometer on how many kids there were around Halloween. Ours has dropped dramatically. For the longest time no small children but then a family moved in with three of them, all little girls. The cycle is turning :)))

I wish there were some 3 year old boys around here! My Ds who is 3 is usually the only boy among girls. You sound like a great neighbour! :)

I must admit it would be mine tossing toys over the fence. Either one tossing it to annoy another, or one trying to see who will toss it back. I'm hoping our move gives us some great neighbors with loads as children.