Altogether now."Well I had the time of my life....

bill medley: Now I've had the time of my life
No I never felt like this before
Yes I swear it's the truth
and I owe it all to you

jennifer warnes: 'Cause I've had the time of my life
and I owe it all to you

bill medley: I've been waiting for so long
Now I've finally found someone
To stand by me

jennifer warnes: We saw the writing on the wall
As we felt this magical fantasy

Both: Now with passion in our eyes
There's no way we could disguise it secretly
So we take each other's hand
'Cause we seem to understand the urgency

jennifer warnes: You're the one thing

bill medley: I can't get enough of

jennifer warnes: So I'll tell you something

Both:This could be love because

(CHORUS)
Both: I've had the time of my life
No I never felt this way before
Yes I swear it's the truth
And I owe it all to you

Well if you haven't figured it out yet, that's THE song from Dirty Dancing, and we went to the theatre today and saw it, at the Royal Alexandra Theatre in Toronto. 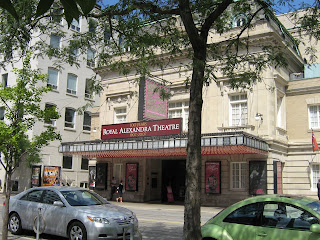 They had a number of tickets on sale for $45 each, so we decided to take advantage of the deal, but they were up in the nose bleed section, and for someone who is afraid of heights I wasn't thrilled, but I concentrated on everything else and I survived. I only took the one photo inside the theatre and got told off for doing that, and its a crappy photo. 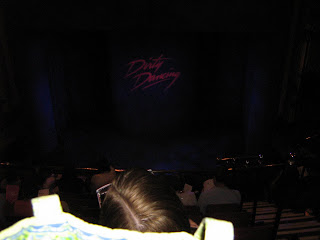 Now I must admit I prefer the movie. Its not to say that the actors in the theatre were not good, but honestly who can top Patrick Swayze? If I wasn't married and Patrick came up to me and offered to whisk me away to a tropical island would I resist, heck no, I'd be dragging him to that island as fast as my little legs would carry me!!! I also think Jennifer Grey has that something special about her in the movie, and the girl playing baby just didn't have that same innocence about her.

Just in case you need a reminder of how good Patrick Swayze looks watch this. Told dh he doesn't hurl me up in the air like Johnny does, but as he reminded me we both have bad backs, plus I must be 100lbs heavier than Baby!! I melt when Johnny sings the song close to the end......I think I am having a hot flash now....LOL

The actor who played Penny was good though, and had legs up to her arm pits. I think she took my share of legs when you know who (God) was handing legs out, as I have short legs.

Now one of the singers was Melissa O'Neil who won Canadian Idol in 2005. Don't worry if you haven't heard of her, most people haven't, but she is a great singer.

Just along the road from The Royal Alexandra Theatre is the Princess of Wales Theatre. We saw the Phantom of The Opera there, and in October, the Sound of Music starts. Here is a photo of the theatre: 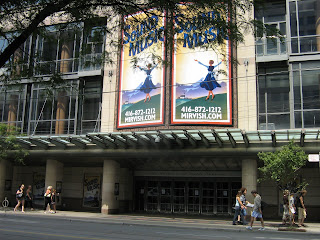 Across the road from the Royal Alex is Roy Thompson Hall, which is quite a weird shaped building. Here is a piece about Roy Thompson himself. 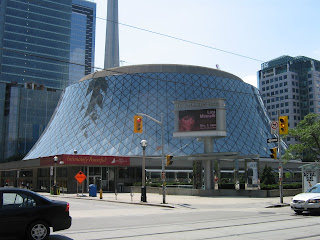 Now one of the good things about today was we met dd for lunch as she lives close to downtown Toronto. So it was good to see her in the flesh. Remember the accent post from the other day? So I order omlette and toast and when I see the toast it has no butter on it, so I ask the server for some butter........well here we go again, he has NO CLUE what I want, dd has to translate for me.........how sad is that............of course dd and dh found this amusing? Did I mention that I DO speak English. This was the view from the restaurant, the CN Tower. 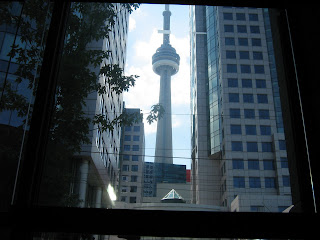 Would you believe that going up the top of the CN Tower was how I discovered I didn't like heights, I was NOT WELL at all, and have never been up since. No amount of money would get me up that thing again, I'm telling you, I swear the whole building was swaying back and forward at a great speed.......did I tell you I feel as sick as a dog on the bridges that we use to cross over from Canada to the USA, they also sway!!! No wonder I am never in a good mood by the time we get to the customs booth........dh reckons one of these days I am going to get the glove search and it will serve me right...........he finds that amusing.

I took other photo's but didn't want to bore you.

Now have to say "Daisy" (GPS system), was pretty quiet on the way downtown, as dh followed her instructions, however on the way back she had plenty to say as dh took the collector lanes rather than the express lanes, as its faster, and I will agree with dh on this. Then of course we got to the highway close to home, which is new and of course she got lost and had a hissy fit {{{SIGH}}}

Pleased to say that as I am typing this I have got the feeling back in my behind, as they were the most uncomfortable seats ever, figured that was a piece of information you would want to know.

I will say I am not convinced theatre is the be all and end all. I prefer live concerts, and you'll be pleased to know we are going to see Celine Dion on the 28th of August, so will have a post on that. We generally go to a couple of live concerts a year. That's the joy of living so close to Toronto.

Great post Gill - glad you had a good time. We don't go to the theatre that much - have seen the favourites - Phantom, Les Mis etc, but the one show that really sticks in my memory was when we went to see Anthony Newley in Scrooge, probably about 12 years ago. He had always been a favourite of mine but had never seen him on stage. It was fantastic, he was fantastic. A good memory.

Who was Roy Thompson, and did he want a hall that shape named after him?

Did you know it's Patrick Swayze's birthday today? Happy Birthday Patrick. I found out when looking for other birthdays as it's my son's today.

Great post and it sounds like you had a real good time. I will look at your links when I get home.

I know what you mean about the butter thing, unless I say budder here I might as well be speaking a foreign language.

And I share your fear of heights. I discovered my terror at the top of St Paul's in London.

Thank you for visiting my blog, and for your kind comments.

My daughter thinks PS is hot, too. She just absolutely drools over him. I always thought he looked like he'd been beaten by an ugly stick. lol!

I wonder if you would have enjoyed it more sitting closer and lower....

Did you hear, though, that Patrick has pancreatic cancer? Very sorry of that. I've enjoyed all his films that I've seen.

well here we go again... dont talk to me til after the concert! Lol... enjoyed your post my friend.

And I hope you enjoyed your day.

Have a blessed week

I work in downtown Toronto so pretty much take for granted all the sights - it is nice to see it through someone else's eyes for a change.

I am trying to imagine how you pronounce butter so that ppl don't under stand you....can't. I think you will have to record yourself and post it :)

Gill so glad you had agreat time! I have heard of Melissa of course, didn't care for her singing though. I loved the movie too! evelyn

Gill, that made me so homesick! Cush used to work just across the street from Roy Thompson Hall.

I love Patrick too.