I popped out to A & P this morning as I wanted a couple of things. They had the Ristorante Pizza's on sale for $3.99 and I had 75 cents coupons, so got some of those. Anyhow here is what I got for free today: 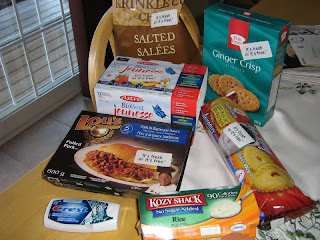 Can you see the Pulled Pork packet, that is the fourth one of the meat entrees I have FOF-ed. All the ones that are expired are the 44th Street Meatloaves. As they are all expired, I sub them with either the Lou's or the Maple Leaf meat entrees. I swear they are putting the expired ones back on the shelf, which is fine as far as I am concerned as I will just keep pulling them and getting another meat entree for free!!

Also yes, you are seeing toothpaste, they have an expiry date on them, as does deodorant!!!

I will say I am going to be over budget this month, but I am stocking up the freezer and want to get as much free stuff as possible before the programme expires at the end of the month.
at August 15, 2008

Email ThisBlogThis!Share to TwitterShare to FacebookShare to Pinterest
Labels: FOF-ing

those are rediculous steals!

Just kidding....glad somebody is saving money at the grocery store!

Dang your a good shopper!!!
Have a good weekend
Diane

Hi GIll,
Trying to catch up on my visits. Still canning toms. here.
Looks like another great find!
We are so stock, I know when we have to go to the grocery we will be in sticker shock!
Have a great wk.end.
Blessins',Lib

Hi Gill, no problem at all and am happy you found something you liked. Thanks for always stopping by my blog and leaving all the lovely comments. Always appreciated. Dropping in to see what you have posted is always an enjoyable part of my day.

Thanks for your visit. You are quite the shopper. Every time we make a trip to the super market the prices have increased. We took a cruise to Canada three years ago and we had the best time of our lives. I would enjoy your English accent. Also, I am going to try your recipe for cabbage rolls. I love anything with cabbage.

Have a good evening.
Sweetie

I wish I could find deals like this in the U.S.!!

Hi Gill , you ask me what cream peas are . I didn't know what they were either until the other day . Anyway , they look like green beans only they are bumpy, hehehe.
You just shell them and cook them like you would crowder peas. They are pale green when they are shelled , but when they are cooked they turn brown . They are bigger than crowder peas . They were very good . Oh I forgot, there is a pic of them on my blog.

Wow, it's awesome you're getting all this stuff for free but scary that they have enough expired stuff to start a program. =/

Great job as usual! Although I haven't been posting or taking pics I've gone FOFing 3 times in the past week and a half. 1st & 2nd time about $45 worth. I got the same stuff each time (my store doesn't always learn to pull the expired stuff off the shelves either). 3rd time it was under $10 but I just needed a few things so didn't spend a lot of time. I'm well stocked on deodorant (5 of them, 2 brands) & sunscreen (2 bottles) for next year, LOL!