Answer to some questions and more photos.

For those of you asking about Molly, her allergies are sort of under control. I have her on one half pill of Vanectyl-P twice a day and that sort of works.   Any less and she scratches and chews like crazy.  I have enough pills to last until the end of the month, and then I'll talk to the vet again.

Back on this post I mentioned we had a strange nasty smell coming from the top of the basement stairs.  Pleased to say we have discovered the source of this smell, it was a dead mouse.  Actually a dead stinking mouse.........dh has a light with a camera on the end of it, and it was behind some pipes.  I had to use tongs to haul it out of there.  So we are back to smelling pretty nice in the house again :0)

On Monday there was a lot of activity at the bird feeder.  The chickadee's were out in force.  We had six Blue Jays at the feeder at one time.  There were some Dark-eyed Junco's and a couple of Northern Cardinals (both males)  and even a Downy Woodpecker (a female).  Sorry I only got the one photo of the Northern Cardinal. 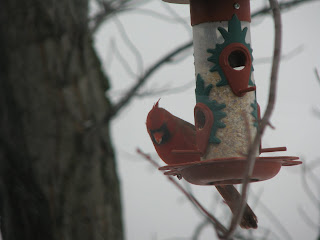 I managed to get another block done for the second block of the month quilt I am making. This one is in creams and pinks. I was hoping to have a couple of different greens in my stash for the sashings. 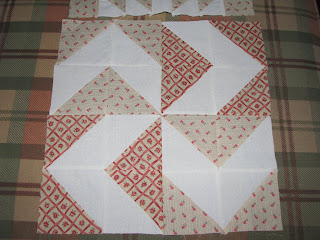 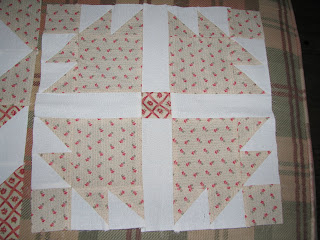 "Away in a Manger," a classic Christmas Carol, I am not sure who is performing this, it may be "The Southwell Boys Choir"? They have such beautiful voices though don't they?

Ewww, glad you found the dead stinkin' mouse. Good to be rid of it!

Gorgeous photo of the cardinal.

what is a month quilt ?

In answer to your Q we have a single storey roof under the bedroom window. The cats have worked out they can get on it & come in through the window. If its shut like last night they scratch on it. Needless to say I feel like their servant as they then need letting out of the bedroom !!!!

glad you found the smell! been there and done that.

Glad you found the stinking mouse.
Love the cardinal pic.
Have a warm and cozy day!
Blessins',Lib

How interesting to see the birds - so different to our own garden birds!

The Cardinal is gorgeous. I like the photo by the feeder.

Ah, I can empathise. We let the cats out, we let them in, out, in. Oliver gets up in the attic by climbing on the wood pile in the garage. I know we have mice up there!
They are pretty miffed with the 75 cm of snow, too!

Glad you found the mouse! And I love your quilt blocks - very pretty
Kris

Glad you found that dead mouse.

What a beautiful cardinal! DH loves them. Will have to show it to him when he gets back.

Glad you found what was causing your stink.
Love the way your blocks.
I have added a post on my blog regarding the milk bags mats.
Patricia

Glad to hear you got the mouse out of there! I'm at work so I can't listen to the Christmas Carol, but I'll try to when I get home. But their collard though it looks like it might be Kings' College Boys' Choir.