I decided to make a start on the Christmas baking.  I made a batch of Chewy Oatmeal Cookies.  The recipe is here and it is super simple and is quick to make. 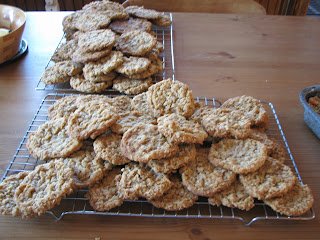 I then made Rice Krispie squares, here is the basic recipe  I  added Christmas sprinkles, toffee bits and chocolate on the top. 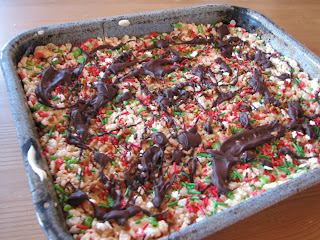 I then found a recipe for Ticky Toffee, no idea where I got it from, but it must be British as its in ounces. So I thought I had better make it and taste test it to make sure it was okay for you to make. I know what a martyr I am!!!

Anyhow here is the recipe:

3oz Marg - I used marg, but will try butter next time
5oz Granulated Sugar
I can Condensed Milk - my can was 300ml
1 tbsp syrup - I used maple syrup

Melt marg in a heavy based saucepan.  Add sugar, condensed milk and syrup.  Heat gently, stirring continuously until the sugar has dissolved.   Bring slowly to the boil and simmer gently for 20 minutes, stirring all the time.  Remove from heat and flavour with a little vanilla essence.  Pour into a lightly greased 7 inch tin.  Mark into squares when cool.

Okay now what happened with me when I made it.  I cooked it for 15 minutes and my poor arm was aching, so figured I do the drop a little bit into some cold water trick, and it was rock solid.  So, if I were you I would cook it for 10 minutes, and then drop a little into some cold water to see if it will set up.  Mine is okay if you like rock hard toffee that you have to suck to get it to soften up.  Now one bonus is, it takes you forever to eat a piece of toffee, but it makes it difficult to talk!! 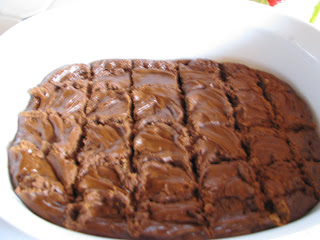 I am a sucker for a camel wearing running shoes (trainers), so of course had to include this version of "We Three Kings."

Ooh but I do love you for it! Everyone loves photos with recipes and the 'ticky' toffee... hmmm, now that sounds delish.

English eh? I wonder if hubs remember this when growning up. He's asked for the rum raisin bread/cake which I think is more so a bread pudding.. it's dark and dense and full of booze and other goodies.

scrummy - might try making the oat cakes - trouble is the hens are eating all my porridge oats !

It all looks very delicious! Every body is busy cooking and preparing for Christmas. I feel lazy for I haven't done anything.

That was so so good, love it

We appreciate all you hard work and commitment to us! What a hard task you set yourself!! lol!
Have you any fillings left, after all that toffee? looks scrummy!

Loved the pictures of the farm. Lovely view...and your right it sure is cool.

Being a martyr? Never thought of that one before. I'll see if it works this Christmas. They have never fallen for the taste tester bit. LOL

Maybe I'll buy you a train ticket and you can come do that in my kitchen.