Here in Canada one way to buy milk is by the 4 litre bag. Which after being in Canada over 20 years is normal for me. However when I was talking about it on this post Kadeeae who is from Britain,  thought it was a little unusual to buy milk by the bag. 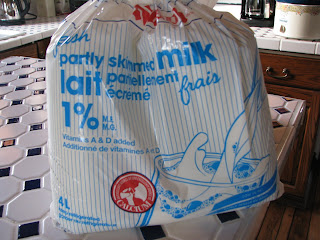 There are three inner bags in the one large bag and look like this: 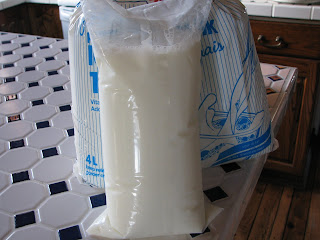 We also have special jugs where we put the bags in, and we snip off the corner of the bag so we can pour the milk out. 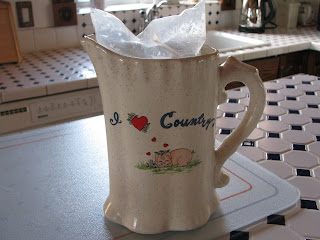 Now I buy 1% milk, which has a 1% fat content in it.  We also have skimmed milk, 2% milk and homogenized milk which is 3.5% butterfat content.  We can buy 4 litre bags of chocolate milk as well.  We can also buy something called Half and Half, which we use in coffee and is half cream and half milk.  That comes in cartons, generally 1 litre or half a litre.  Here is an article about fat content of milk/cream.

I buy my milk in the plastic bags, but we can buy milk in cartons, just like in Britain generally in 1 or 2 litre cartons, but it is more expensive that way.  We can also buy milk in plastic jugs just like in the States, but only from small corner stores like 7-Eleven, Hasty Market that sort of store.

Here is an article where some folks in Britain think its a good idea to adopt the Canadian way of having milk in a bag.  Here is a site dedicated  to bagged milk called The Canadian Milk Bag which has some very interesting facts on it, and answers many questions that you may or may not have....

Now when we were growing up and even when me and dh first got married we had a milkman who delivered milk in glass bottles every morning.  I do believe many years ago they had milkmen here in Canada.  I haven't seen a milkman in years.  Nor have I seen milk sold in glass bottles for many years.

Now between me and you, these guys are not hard on the eyes!! Il Divo, even the name sounds manly!! Mind you for all I know it could mean man? Anyhow today's song is "O Holy Night," sang by Il Divo.

Waitrose has started selling bags of milk. I find the plastic container you get free a bit fiddly but it does cut down on all those plastic bottles !

Until recently we had a milkman but he delivered the milk at 5am which woke the dogs up who then woke everyone else up !

Ooh chocolate milk ... I know someone who'd want that - my son !

Hi Gill, Still getting our milk in glass bottles from the milkman here in Suffolk. Unfortunately the daily delivery has been cut to 3 times a week. I wonder for how much longer these deliveries will continue?

Thanks for the photos (and the mention), something I'd never seen, or heard of before! In Britain, but a US transplant . . . had always bought milk in gallon plastic containers there.

Still have some milkmen here and glass bottles too! And on TV you'll see people coming out of corner shops with pint glass bottles, but I've never seen them. A growing trend here is 'real' milk, which simply means that it is unpasteurised. Below is an excerpt from the website of the farm that I've purchased the 'real' milk from.

"Like your milk "straight from the cow"? Many people do, so we are happy to be able to sell real (unpasteurised) milk direct from the farm and our farm shop. We don't like calling it "raw" milk, because that implies its not ready to drink yet. This is milk in its natural state, before any heat treatment has been applied to it. And it's delicious!

Our cows grazing in the back meadowNortons' Dairy real milk is available in 4 pint poly-bottles only. We only bottle to order, so please contact us to place an order, or ask in the farm shop for details."

Il Divo, if my Italian is not to rusty meand 'The Divas', but to the masculine :o) I'm a bit of a language nerd, it can come in very handy :o)

As for milk, there is also Soy milk, which I just started drinking about a month ago after being told that dairy milk is not good at all for adults. It tastes great and I've seen a difference in my overall health already!

cool idea! I too love il divo but get emotional listening to them lol! xx

Years and years ago in the US we got milk in bags even in the schools we had milk in bags I know I'm dating myself by telling everyone that :)

I'm in Wisconsin (moved here 13 years ago)and we have a convenience store that sells milk in bags (the plastic pitchers that hold them are free.) I had never seen that any other place.

I sure like the milk bag idea. I grew up with a milk pitcher, but we poured it out of the cartons. Wish we could get certified unpasteurized milk in the U.S. You have to buy stock in a cow to get "your own milk" from a farmer.

Can't buy milk in plastic bags in Manitoba. We get it in a plastic jug or a quart.

btw - some very cold weather coming your way. We were down to -20C last night and only -14C for a high today. I'd rather have snow where it's not so cold. Hugs

Milk in a bag?! Who would have thought it could come that way? Now I can say that I learned something interesting today--Thanks for that! :-)

We had milk delivery here in southwest Ontario. But it was years and years ago...ended in early 70's. I like the bags - easy to store and heavy plastic is great for reusing - freezing vegetables/fruit.

Il Divo are the dreamiest. Thanks.

Milk in bags was a real novelty for us when we were kids. I'm gonna date myself here, but I grew up in Southwestern Ontario (not sure where you are) and I remember when the milkman stopped coming and we started buying milk in plastic jugs and bags. It had to have been late 60s or early 70s when they finally stopped delivering because my parents last house was built around 1969 and it still had the milk slot built in by the back door.

scrappy quilter that is COLD!!!!!! Brrrrrrr.

I remember seeing milk in a bag when I was in Spain about 25 years ago. I guess it saves on the plastic containers but still there is the bag.

We have milk in plastic containers here but as recycling here I hate all the waste. I try to buy the UHT milk which is in a cardboard box carton. Many people here use powdered milk too but i just can not get my tongue around the taste LOL.

I cant abide the plastic milk bag. I got my students to do energy measurements on production and research what happens to the empty bag as opposed to cardboard and plastic bottles. Cardboard was the least energetically expensive to produce and was easily re-cycled or composted: the plastic bottle next and finally, a big no for the bag which cannot be disposed of in any environmentally friendly way.

I really enjoyed this post. Love to hear about day to day things in people's lives that are different to mine.

I can see a big advantage to milk in bags, it would make it harder for the teenage boys to drink the milk straight from the container.

Never seen this before ,as always I learned something new from you:o)
When I was preschool we had a milkman, one day I wanted Choc. milk,Mom thought other wise,the Milkman told me the Choc.Cow fell and broke her leg,and no choc. milk today. lol It worked.
Have agreat wk.end!
Blessins',Lib

milk in bags- whatever next?

hi gill , here is a post written in the wagon about the wagon just to show you and your lot how bad things are getting over there - might be interesting for your readers to see what its really like out on the road nowadays
yes im ok now but still having trouble sleeping - such is life
nick...

We buy "lactose free" milk for our daughter, we do have milk delivered to the home and we buy milk in bags and then in turn recycle the bags.

okay gotta stop bawling. O holy night has always been my absolute most favourite christmas carol and their rendition is beautiful. will come back to this often as the season progresses.

I have never seen milk in a bag. I used to live in England. I miss "long shelf life" milk that you could always have on hand (you had to refrigerate it after opening, just like canned evaporated milk). I think it was packaged in Germany.

I love raw milk and it's thoroughly illegal in Canada. Apparently it is in the US, too, but we always found a farm selling it. We never died. ;)

Tell the truth: I hate bagged milk. For a while we were buying 7-11 jugged milk and my oldest kids darned near had a party they'd not seen jugged milk in so long! I know it's supposed to cut down on waste, but I'll be painfully honest: 3/4s of the time I throw the bags in the trash instead of recycling them. I can't tell you how many times I find a crusty bag in the sink or on the table and I'm not scrubbing the darned thing to recycle it. Until my kids are grown, most of the bags will probably end up in the trash, not the recycling...so it actually amounts to more trash. I miss going to the farm with my gallons and having the farmer fill them! THAT's RECYCLING! :D And truly, there's nothing like milk that's never been in plastic or waxed cardboard. Glass all the way.

I need to move out to the country and have a milking cow. :D

We buy UHT and if we buy fresh usually 2 litres in a plastic bottle with a handle. Some shops have 3 litres. We had bottles of milk at school when I was little. My family milked the cow or the goat.