On Saturday night we went to dd's , as dh got a pair of hockey tickets to go and see the Maple Leaf play some other team. For those of you who know me, I don't like hockey, rather watch paint dry!! As the tickets are worth a couple hundred dollars each, he takes either ds or future son-in-law. This time he took future son-in-law, who by the way is hockey mad.

The Maple Leafs did win, whomever they were playing and it was a "shut out," or a "shut down;" or some word with shut in it, which means (as I did ask) the other team didn't score any goals. Pleased they won when dh and future son-in-law were there, as they both enjoyed the game.

Generally the Maple Leafs are crap, mind you so are the Toronto Blue Jays (baseball), Toronto Rapters (basketball), and the Toronto Argonauts (American Football); oh and I nearly forgot about Toronto FC (soccer/football), don't think they win much of anything either!! I don't think any of them win many games, still they all have devoted fans that believe in them, so that's the main thing, right?

Anyhow, while the boys were at the hockey game, me and dd went for some retail therapy to the Eaton Centre. They have the most beautiful tree covered in Swarovski Crystals. I love to see it, and again it was beautiful. My photos do not do it justice at all. 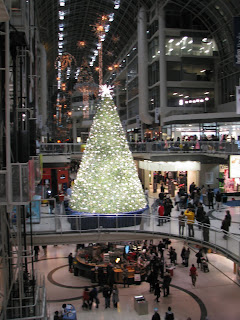 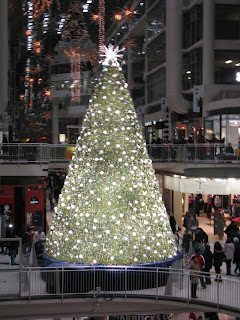 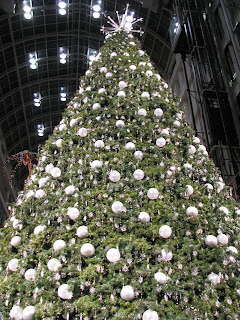 Now dd had lunch on Saturday with her best friend where they exchanged Christmas gifts. Her friend had been to the States and had gone to a Coach Outlet store and picked up dd another Coach bag for her for Christmas; what a kind friend she is, and she is a love.  So we popped into the Coach store to browse and see what they had.  I loved their window display, very understated, don't you think?  I actually like the bottom purse/handbag, I could see dd carrying that....... 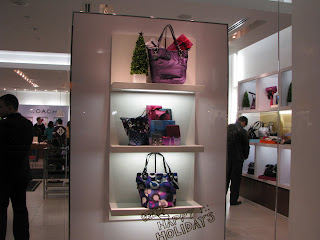 Now we had to go to a store outside of the Eaton Centre, which was in Yonge/Dundas Square. I have never been there before in the dark, and it was lovely, so many lit up billboards, and no snow to be seen anywhere!! 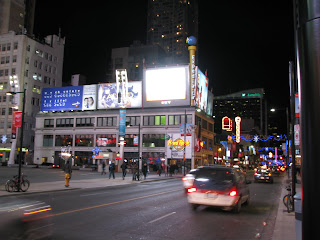 We had to pick up a gift card to that store below the billboards. I think its Forever 21 or something?  Here is a link to a clothing site for Forever 21  It doesn't look familiar, mind you, I never had a good look around, as it was so noisy in there, with the music, and I was fascinated with the male store assistants, as they were so good looking and so very gay!!!!  I even commented to dd about that, as they were gorgeous.......but gay!! 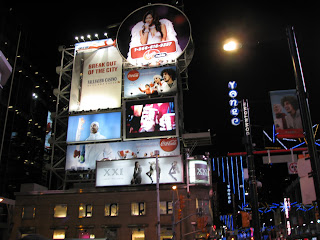 See the big green sign for Koodo, that's my cell phone carrier and they have the most stupid adverts on tv, which I just don't get at all...LOL 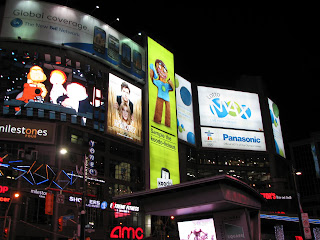 They had a beautiful Christmas tree and lights in the square, but I just couldn't get a decent photo of them, sorry. 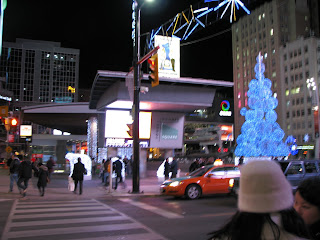 I have more photos to show you, those will be in tomorrows post.  We had a super time and I only spent just over $20 on some liquid soap (5 for $20) at Bath and Body Works, as I love their stuff.  Plus I bought a drink and a brownie for us both at Starbucks, which was yummy!!

Some lovely photos there Gill, so crisp and clear! I was surprised not to see any snow in them though! Sounds as you had a wonderful time, Starbucks - a must, lol.

THe tree is Beautiful.
A great buy on your soap!I love their products.
Have a restful day!
Blessins',Lib

A fun trip. Do you have snow now? We have had buckets and buckets! Enjoyed your post and photographs.

What an intersting time you had. Always great to go and people watch..lol..while in the city. Still like the country life.
Totally agree about sports..!!

I'm glad you had such a lovely time in Downtown Toronto! I haven't been your way since October and am suffering from visiting my boyfriend and Toronto withdrawal, but at least he's been coming here. Only three days until he comes back and I'll be heading to Toronto in February :o)

Lovely pictures. Sounds like you had a fun trip all around.

What a gorgeous tree -- almost makes a trip to the Eaton Centre sound appealing. Even though it's within walking distance, I avoid that place like the plague!
I can't believe the price of hockey tickets!

not a hockey fan, or baseball as such but going to a game (in TO) live is a great experience. you should try it some time.
I love that tree. :-)

Love the pictures. The Toronto teams are somewhat like ours...hence the Blue Bombers are now without a coach and General manager!!!

btw - did you keep up with your savings with the quarters, etc. Can you challenge us again in 2010!! Hugs

I can picture how lovely the crystal tree was - the QVB in Sydney has a Swarovski tree every year that I try to visit at least once.

I am jealous!! The shopping sounds absolutely wonderful! I'd have taken that over the hockey game any day too!

All the lovely Christmas lights. I used to work at Eatons selling Ladies High Class Shoes, in the early 60's. I don't think the subway was even built then -- maybe a small part from Bloor to down town, I don't remember for sure. It was always the big thing to go down town and see the Eaton's and Simpson's (Sears) Christmas windows. That was long before the big Eatons Center.