A few photos, and a quilt block that will be the death of me, and a funny story!!

Last month's block of the month was "Fly Foot." What a nightmare it has been as it incorporated Flying Geese in amongst it.  I have never done Flying Geese before, and it has caused me more aggravation than enough.  I gave up in the end, and did it using this pattern  It's slightly different to the one they gave me, but similar enough not to make much of a difference.

I have run into another problem though, I think I have scorched the white fabric with the iron :0(  Not sure what I will do.  I need a 12 1/2 inch square to square up this block and the other one I made before I add the sashings.  Oh and yes, my points don't match up either :0(  However doing it this way was a whole lot better than the original pattern as they were so far out it was crazy!! 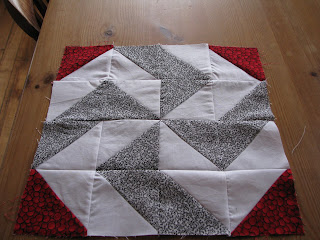 Now over the past couple of days we had our first winter storm.  We got a bit of snow and it was so windy.  However on Wednesday afternoon it got out nice and I took some photos. 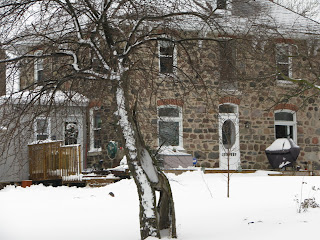 This is the "forest" on the south side of the property. 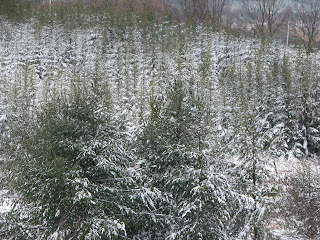 Molly can't keep her nose out of the snow!! 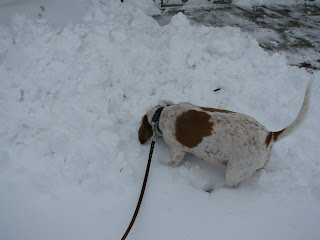 Now for the funny story.  So as I said before we got a snow storm on Wednesday.  By the afternoon it had stopped snowing, so I knew we had too much snow on the driveway, so I figured I would use the snow blower and blow out the driveway.  I have NEVER EVER used a snow blower before.  I had to admit though I was pretty proud of myself although it was hard work and it took me over an hour and a half to get it sort of done.

So I ring my dad to tell him how he should be proud of me for doing that, but I said I fell on my behind while trying to pull the snow blower back.   So my dad says well why didn't you put it in reverse???  What reverse, I didn't realize it had a reverse {{{SIGH}}}  I tell him I was surprised at how easy it was to start with the "pully thing."  He says, well why didn't you plug it in and press the switch?  What are you talking about {{SIGH}}  Then the chute thingy wouldn't turn from side by side, I had to manually do it and it didn't work properly {SIGH}  So I say to my dad, I must get dh to give me some lessons on how to use it, which he did when he got home that night.  So I am expecting the next time I use the snow blower, it will be easier now I know how to use it.

That story reminds me of the first time I used the lawn tractor, see this post.  What a doofus I am!!!

Oh we have a strange, nasty smell coming from the top of the basement stairs where I "lost" another mouse trap a couple of weeks ago {{{{SIGH}}}} and although I stuck my hoover pipe in the area, I couldn't find anything, so another job for dh this weekend!

An oldie but a goodie, "Rockin Around the Christmas Tree," by Brenda Lee  Great video to go with it.

Your experience with the snow blower sounds like something I would do. I was using pliers today and my husband watched for awhile, then said, "I can show you a better way to do that." And sure enough, he did.
Aren't we lucky to have handy husbands?

I did not cut that paper ornament on my tree - my daughter did when she was in high school. I just love it.

No snow here, but maybe a flurry coming tomorrow.

LOL! At least you cleared the drive! Please send me some snow...xxx

you nana ! however I'm still impressed ! Oh for snow lots of it ...we never get more than a day's powdering here on the south coast.

I love your story! I'd have done the same thing, and DH would have rolled his eyes. But keep that snow -- unless it happens to be on his days off. . . . . . Can you do snow on special order??

I thought my eyesight was failing when i clicked on here this morning and saw little white dots everywhere. LOL
I can identify with the snow blower story, sounds like something I would have done.
:-)

What a giggle! lol

At least you got the snowblower out and gave it a good try, not one of those to sit and wait for someone else to do it while whining "I don't know hoowwww.." Good on you!

Yes, squarespace is a pay service - but I was fortunate enough to have a generous discount available to me when I signed up. Have been very happy there. Am feeling much better now, thanks Gill =)

Hi Gill, the quilt square is a beauty, it looks like a pinwheel. Back when I was quilting my points never matched up either. I didn't care, just wanting to get them finished and on the beds! Twenty years later, it REALLY doesn't matter. :-) Funny snowblower incident, but you should get points for doing it at all.

A couple of days ago, our cat and the the Toy Fox Terrier did a tag-team effort and caught a mouse that had made his way in. I was trying to make a fire in the wood stove when, much to my surprise, Abigail deposited her 'trophy' at my feet. Gah!

You have a lot more snow that us, we have only a dusting, but the winds are bitter cold. I can relate to your snow blowing. Your block looks great. Patricia

Lol You always brighten my day!Thanks!
Love the photos.You have a Beautiful place.
Have a warm and cozy wk.end !
Blessins',Lib

you did good for no lessons! how is molly doing?

You snow blower story was hilarious! As for your quilting block, I think it looks lovely :o) Your house and property look lovely in the snow too, that's one thing I love about old houses and old neighborhoods like mine, they always have a far more charming look in the winter than newer developments :o)

I LOVE YOUR PICTURES of "your neck of the woods!!" It's really beautiful!! I also love your story of the snow-blower...Again I totally can relate!! :-))

At least you are brave enough to try the snow blower!! Next time will be a breeze :-)

I love your house... it looks so nice in the winter!