Saga of my mouth continues and a book Review

So as you may or may not know I had to have my root canal that I had done last October re-done again as it didn't work......  One week on and just touching that tooth with my tongue sends a wave of pain up it into my gum.  So obviously something isn't right.  I'm at a point where I do not want him digging it out again, so I called the dentist and spoke with the front desk and explained what has happened.  To cut a long story short I am heading to the dental surgeon on Thursday, June 8th to have it extracted.

I am on another round of antibiotics to see if it will dull the pain, as at this moment, NO ONE is touching that area the way it feels at this time.  Meanwhile my jaw is aching on the opposite side as I am chewing on that side only.  I have never had as much trouble with my mouth ever and I faithfully go to the dentist every six months.  This will be the 3 rd tooth I have had extracted in a year, and all on the right side of my mouth.


"The Lady of Bolton Hill," by Elizabeth Camden 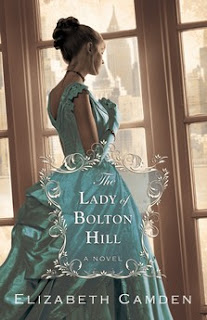 When Clara Endicott and Daniel Tremain's worlds collide after twelve years apart, the spark that was once between them immediately reignites into a romance neither of them thought possible.
But time has changed them both.
Daniel is an industrial titan with powerful enemies. Clara is an idealistic journalist determined to defend underprivileged workers.
Can they withstand the cost of their convictions while their hearts--and lives--hang in the balance?
Although this is a romance book it is also a "whodunit" book as well and I have to say I didn't guess "whodidit."  I read it in one sitting......yes I was supposed to be doing other things but it captured my attention as I wanted to know who was behind a certain incident in the book.  I think you knew right away it was going to be a boy meets girl, girl moves away and when they get back together again boy and girl unite.  The adventures though in between hands does make it interesting.
Stars out of 5: probably 4.5 liked the book wanted to know what was going to happen but some of it was predictable.

I really feel for you, It must be terrible. I hope they can pull it out and you feel better soon.

If I was you, I would change my dentist! Good luck on 8th June. Let's hope you will soon be pain free.
The book sounds interested. Is it in the romance genre or the mystery genre?

Poor you, I know all about the pain that accompanies a root canal gone wrong! I've had a couple of events like that, each time on a long weekend when the dentist isn't available. I think taking the tooth out is the best idea, but you don't want to do too many extractions and leave yourself tothless!

Just what the heck is going on with your mouth! You could always get a second opinion, you may save the tooth.
Jane x

That is probably my next read - I have reviewed 2 others so far this month.

You must be in agony to want it pulled.Hope the 8th comes round quickly!!
Jane x

Oh, poor you! I can't imagine having all that dentistry going on in the same place. Hope it's straightened out - and soon!

I'm truly sorry you're having such a miserable time with your teeth Gill. I think after you have had this sorted out, I would go see another dentist.

Thanks for the book review.

I feel for you...I had a root canal done one time only to have pain that was just horrible...just out of the blue. Not to do with eating at all..we would be out going some place and it would set in..I went back to the dentist and he said he could redo it or pull it...I said pull it. When he did, he said it was a good thing since the root had split and redoing would not have helped at all.