"The Sweetest Thing," by Elizabeth Musser 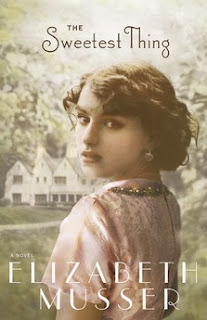 Anne "Perri" Singleton's world is defined by the security of family, the camaraderie of friends at an exclusive Atlanta girls' school, and an enviable social life. She isn't looking for new friends when Mary Dobbs Dillard arrives from Chicago. Besides, "Dobbs," the passionate and fiercely individualistic daughter of an itinerant minister, is her opposite in every way.
But just as the Great Depression collides disastrously with Perri's well-ordered life, friendship blossoms--a friendship that will be tested by jealousy, betrayal, and family secrets...
With her endearing characters and poignant storytelling, Atlanta native Elizabeth Musser vividly re-creates the charm of her beloved city amid the poverty and plenty that shaped the 1930s.
I loved this book, I couldn't put it down.  The characters were so real and you felt as though you were right in there with them.  There was a mystery aspect to it that I didn't click about until close to the end.  You felt the pain and the suffering the two girls went through.
It also highlighted the importance of living on the right street to be socially accepted.  I also learned a couple of things about "southern living" in the 30's.    It also made a point of showing you that outside appearances can be very deceptive.
One question though I had for anyone who is familiar with the Southern States; was it or is it common for a double barrelled name, i.e Mary Dobbs, Mae Pearl?  None were hyphenated but when people spoke to them in the book they called them by both names.
Stars out of 5: a 10!!!  Okay I know it should be just a 5, a great book, with super characters and a book I would really recommend you read.....
"Book has been provided courtesy of Baker Publishing Group and Graf-Martin Communications, Inc.  Available at your favourite bookseller from Bethany House, a division of Baker Publishing Group".
Posted by Gill - That British Woman at Friday, June 10, 2011

I've often wondered about the use of double names. I hope you get an answer so you can pass it on. I enjoy your book reviews especially as I get introduced to new authors.

This book sounds really good and is going on my wish list right now. I am not an expert on the question of names but I am from Texas so that makes me southern, I think although not in the sense of Alabama, Georgia, etc. However, the use of Christian name and middle name is common. My husband has always been, and apparently will always be, Allen Wayne. His sister was always Sheila Rhea but his brothers were only called by their first names -- guess it depends but yeah, using both names is common.

I loved this book too - the double name threw me a bit too but Mae Pearl is at least two girls' names - what the heck is a Dobbs?!

Yes. Double names are very popular in the South, no hyphen. One of the most famous Southerners, Scarlett O'Hara, was always called Katie Scarlett by her father. Here's a fun website with lots of examples
http://usads.ms11.net/namelist3.html
I am not an original Southerner but have lived in Georgia 20+ years.